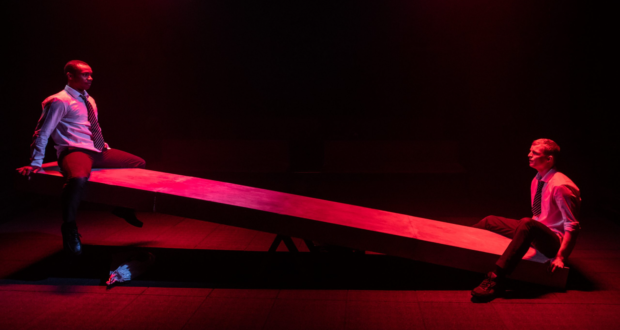 As the lights go down signalling the start of Bacon, we hear the sound of sizzling in the darkness. From there, this incredible play slowly heats up until a fire is raging. It is a breathtaking piece of work, with flawless, emotionally impactful acting, and a considered, eloquent script that gives coherence to the profound challenges of youth. The first thing we see is Natalie Johnson’s deceptively simple stage design; a see-saw platform set between two banks of spectators, and a metaphor for the whole experience. Two schoolboys&nbsp; – &nbsp;year 10s – stand precariously on either end, battling each&hellip;

A sizzling, insightful exploration of toxic teenage experience, with a phenomenal, flawless cast. It will take your breath away.

As the lights go down signalling the start of Bacon, we hear the sound of sizzling in the darkness. From there, this incredible play slowly heats up until a fire is raging. It is a breathtaking piece of work, with flawless, emotionally impactful acting, and a considered, eloquent script that gives coherence to the profound challenges of youth.

The first thing we see is Natalie Johnson’s deceptively simple stage design; a see-saw platform set between two banks of spectators, and a metaphor for the whole experience. Two schoolboys  –  year 10s – stand precariously on either end, battling each other to be in control of the sway, and neither child nor adult in this improbable playground. Darren is a ‘bad boy’, Mark a swotty newbie. Each socially isolated, they develop an unlikely friendship, which is destined to end badly and is fed by a malignant interdependency.

This is a breathtaking piece of work. Contemporary, youthful, surprisingly humorous and deeply moving – it’s a convincing examination of human vulnerability and powerplay. Playwright Sophie Swithinbank powerfully articulates the turbulent, confusing vortex of the teenage experience and offers deep insight. There is no binary, no two ends to the see-saw, and no single way to understand each of these boys as they struggle to explore their sexuality and masculinity, destructively denying their true feelings. They are both subject to a toxic culture, which ultimately creates two victims.

Director Matthew Iliffe does an extraordinary job in complementing the clarity of the script, interpreting the bewildering experience through ideas of imbalance. The actors use all directional planes – sometimes flat on the see-saw, then standing, or squeezing past each other in electrifyingly close proximity. The physicality often makes the atmosphere fiercely charged, while shifting, diverse movement underscores the manic, barely suppressed emotions within the characters; desperate to escape, always in a precariously unsettled state.

And what exceptional casting! It’s been 30 years since I first went to the Finborough Theatre. The highlight then was working alongside actor Colin Salmon before anyone knew how famous he would get. Tonight Corey Montague-Sholay as Mark had the same essence about him, emanating dignity and composure throughout the disturbing events depicted, and achieving a deeply moving transformation from innocent schoolboy to traumatised victim of abuse.

Similarly, William Robinson as Darren is truly phenomenal. He radiates charisma, looking individual audience members piercingly in the eye as he dares us to take him on. We are made part of his problematic world, before Robinson skilfully draws us into the void of Darren’s emotional poverty and crippling social inadequacy. We can’t help but feel for him, even as he commits the most heinous acts. He will bring tears to your eyes when he describes how there are no stars in his sky. Both of these roles are seriously challenging, but by God, they’re performed flawlessly. I will be watching these actors as they rise to fame and will say I saw them here first!

In the intense, tiny space of the Finborough, the searingly precise lighting from Ryan Joseph Stafford moves us effortlessly between locations, whilst MWEN’s discreet sound design shifts us temporally, marking dislocation in the story as we see-saw between the past and the present. It’s clean, sharp and effective tech.

Bacon does what only theatre can do: it articulates complex experiences that might otherwise be challenging to understand. It examines many sides to all too recognisable social issues, clearing the fog until the causes of toxicity and its subsequent damage become apparent. And it addresses what must be done to change things. You will laugh, you will cry and you will be breathless when you leave.

You can read an article written by the playwright Sophie Swithinbank about writing Bacon here.

Bacon plays at Finborough Theatre until 26 March. Further information and bookings via the below button.

Previous: Review: The Man Who Thought He Knew Too Much, Omnibus
Next: Feature: Sophie Swithinbank on writing Bacon