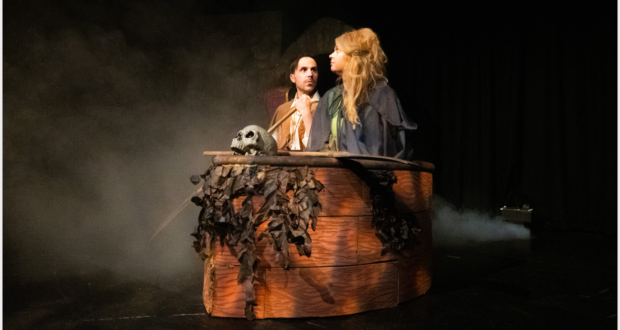 Author: Everything Theatre in Features and Interviews 15 March 2022 0 155 Views

Cherwell Theatre Company guide us through Sam & Zoe Vs Evermore

When Cherwell Theatre Company got in touch about their latest show, Sam & Zoe Vs Evermore, it piqued our interest for a couple of reasons. Firstly, for what looked a rather interesting style of theatre, and secondly, as it appeared to be targeted at an age group that’s all too often overlooked in theatre.

We had planned to sit down with them this week to chat about the show, but unfortunately they couldn’t quite fit the time in. However, they were good enough to provide their own little interview, where they tell us everything we could possibly hope to know.

Tell us a bit about Cherwell Theatre Company

Tristan Jackson-Pate (Writer/Director): I’ve been lucky to be Artistic Director for Cherwell Theatre Company (or CTC as we’re usually known) since 2015, but we were established back in 2004 as a creative home for young people in North Oxfordshire. Essentially, we create a safe environment where young people can be themselves, make new friends and make theatre in collaboration with professional artists. Over the years we’ve made shows in a range of quirky site-specific venues from a decommissioned nuclear bunker to a castle: we even have plans to create a show in an open air swimming pool in 2022! Our patron is Sir Trevor Nunn, one of the many professionals who support us in the belief that CTC creates access for all, regardless of background.

And for this production you’ve partnered with Butterfingers?

Krage Brown (Actor/Writer): Having worked together previously and getting along so well the three of us really wanted to work on something new and fun together and thus Butterfingers was born! Sam & Zoe is the first show we’ve co-written and one we’re all incredibly proud of.

Jess Lloyd-Jones (Actor/Writer): We came up with the name Butterfingers because we wanted our theatre to represent the idea that life can be beautifully messy and no one is perfect. 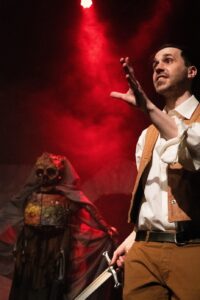 Your show Sam & Zoe Vs Evermore opens in Cheltenham on 17 March, and tours through to 30 April. What’s it all about?

Jess Lloyd-Jones: In our play Sam is depressed. His partner Zoe can’t reach him, so in a last-ditch attempt to ‘save’ him, she designs a game for them to play with the help of a willing audience.

Krage Brown: The show is sort of like a theatrical game of ‘Dungeons and Dragons’ and incorporates interactive storytelling, physical theatre battles and puppetry.

So what sparked the idea for Sam & Zoe?

Tristan Jackson-Pate: The show was inspired by some of the young men we work with in CTC’s youth theatre, who are passionate about DnD but experience social anxiety. They have helped to develop the idea, through an Arts Council funded research and development process, which took place in March 2020, just before the lockdown commenced. Over a couple of weeks, we brought together young people from CTC and students at Banbury College with Pegasus Theatre, a professional creative team and a representative from CALM (Campaign Against Living Miserably). They joined up with an award-winning game theatre dramaturg, who developed approaches to give our audiences agency with us, allowing them to influence the outcome of the story.

Krage Brown: We are avid gamers – video and physical – so getting the opportunity to develop a story set partly within a fantasy world is something we were very keen to dive into! Mixing the two worlds of theatre and gaming just sounded like it’d be fun for anyone and everyone!

Jess Lloyd-Jones: Whenever I play fantasy games I always notice how the character I have created becomes really confident. During our R&D it was so wonderfully interesting seeing the young people become these proud and unapologetic characters also. I think sometimes it can be very challenging – especially as a young person – to always be open, and creating these characters can sometimes really encourage them to talk more openly. I think that concept really drove the further development of the show.

What is game theatre?

Krage Brown: Pretty much what you’d expect: merging physical or mental games within a stage show. A win-win combination!

Jess Lloyd-Jones: I’d say it’s about agency and participation: that point when the audience stops being a viewer and becomes a player. The audience can decide whether to become a Mage, Rogue or Barbarian and during the show will play interactive games alongside Sam & Zoe.

Tristan Jackson-Pate: Some of these are twists on well known ‘playground games’ like Grandmother’s footsteps, while others require the casting of spells, or solving Tolkein-esque riddles!

Tell us about the characters, Sam & Zoe.

Krage Brown: Sam is a fun, creative guy. He enjoys writing and drawing comics set within fantasy worlds inhabited by elves and orcs. Lately he’s been really struggling with his mental health and the ability to talk about it with others.

Jess Lloyd-Jones: I would describe Zoe as a very lively, excitable and (slightly) controlling character, though she means well! The couple have been together for some time and she’s noticed Sam isn’t acting himself anymore and so immediately wants to ‘fix’ the problem by immersing him in the world he originally created. She also feels very comfortable playing an elf in the show. She believes she was one in a past life…

What kind of an experience can the audience expect to have?

Tristan Jackson-Pate: We keep the audience very involved throughout, but never in a pressured way – it’s absolutely not about making anyone feel uncomfortable. The audience form a party of DnD adventurers alongside Sam & Zoe, so they might play supporting roles, help create practical effects and make suggestions to influence story outcomes. Our aim is to create a sense of warmth and community as we tell the story together, and Jess and Krage are so charming and hilarious as Sam & Zoe that they always bring everyone along with them!

Krage: Brown: We’ve partnered with the charity CALM for this production, to promote honest conversations around mental health. Each audience member will get a free comic book programme, which also signposts them to the charity’s mental health support services.

Who would enjoy this production?

Tristan Jackson-Pate: Of course, anyone with an interest in DnD, fantasy films and novels, but I’d say more broadly comedy fans, especially those who are looking to see something new and exciting at the theatre.

Krage Brown: The show is aimed at ages 12+ so it’s pretty inclusive! I’d add that it’s also for anyone looking for a different night out – one that includes both watching some theatre but also joining in and being part of the fun.

Jess Lloyd-Jones: I think if you love Lord of the Rings and fantasy gaming this is the show for you! I would love to say everyone should come but I’m realising that’s very greedy of me…

Thanks to Tristan, Krage and Jess for their time to put this together.

Previous: Interview: Is It Love At First Sight For This Charming Play
Next: Review: The Singing Mermaid, Little Angel Theatre