You can use WP menu builder to build menus
Home » Features and Interviews » Interview: It’s Chekhov, But Not Quite As You Know It!

Interview: It’s Chekhov, But Not Quite As You Know It!

Author: Everything Theatre in Features and Interviews 18 March 2022 0 136 Views

Knuckle Down on reworking Chekhov’s Three Sisters for the modern world.

As you may imagine, we receive a lot of emails with show invitations here at ET! So admittedly, some days we trawl through those invitations and press releases with only half an eye on them, and it can take something different to jump out and grab our attention. That is just what happened when we came across Knuckle Down’s press release for Three Sisters, with its clever use of simple crossing out to make it stand out from so many others we’d already seen that day.

A modern man-free adaptation of the Chekhov classic.

In a room tiny back garden in a house outside a terraced house in a provincial town Wigan, three sisters wait for their lives to begin.

We were certainly interested enough to suggest they tell us a little more about the show. So we sat down with Chloe and Matt of Knuckle Down to find out more.

So, what made you decide to tackle Chekhov? 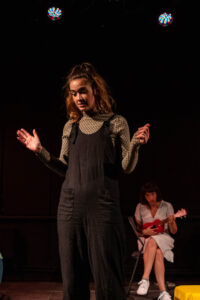 But it’s Chekhov with a rather interesting twist, bringing the story to Wigan and ‘man-free’ – how easy was it to adapt the story this way?

We initially focused on these three sisters but also the three sisters from Shakespeare’s King Lear. We were interested to find out more about their stories as they’re so side-lined in the original texts. Even as the eponymous characters of Chekhov’s play, it’s crazy how many men dominate so many scenes with their chatter! We got rid of them all in our version and renamed them Alan!

We spent time improvising and devising scenes around ideas from the original and then went away and adapted it so it follows the original action of Chekhov’s Three Sisters.  Setting it in modern day Wigan enabled us to swap Moscow for Manchester, and basing it in lockdown allowed us to keep the real sense that the sisters are truly trapped.

And you’re promising “TikTok dance routines”: for those who aren’t too familiar with the original Chekhov, can you confirm that he never devised scenes for TikTok?

Yes! TikTok dance routines do make an appearance at points throughout the play and we can confirm that as far as we’re aware Chekhov never ventured into the realm of TikTok.

But more seriously, do you think modernising stories in this way is a gateway to bringing old classics to a whole new audience?

Definitely!  We’re all about declassing the classics and making an intimidating canon more accessible to people who aren’t steeped in theatre knowledge. We hope everyone will still get all the best bits of Chekhov’s original but with the clarity of an ultra-modern and suitably irreverent lens.

There is a ukulele-playing sister in the play, are we really going to be treated to some songs then?

There’s a ukulele death ballad you’ll be treated to!

Who do you feel this reworking of an old classic will appeal to? Who should be coming to see the show?

Everyone, we hope. Both Chekhov fans and those who don’t know his work alike! It’s about being stuck in life, feeling trapped by circumstance and struggling to reconcile everything that’s brought you to that point, which I think we can all identify with after the past couple of years. It’s about growing up, but not too quickly and also, inevitably, about what it means to be a woman, a sister and part of a family.

And is there anything else you are throwing into your version that we should be looking out for?

There’s a bit of metatextuality thrown in for good measure!

Finally, you’ve got runs at both The Maltings Theatre and Canal Café Theatre, is this just the start? Are there other plans afoot?

We don’t have any plans beyond these two runs as yet, but we shall see!  For now we’re chuffed to have a couple of runs coming up and are looking forward to sharing our adaptation with audiences!

Thanks to Knuckle Down for their time to chat about Three Sisters. They will be playing at Maltings Theatre St Albans 22 – 26 March and Canal Cafe Theatre London 31 March -2 April.