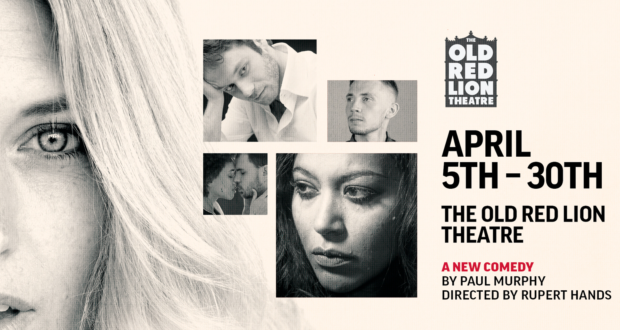 Author: Everything Theatre in Features and Interviews 23 March 2022 0 291 Views

Fringe theatre makers are always coming up with new ways to attract an audience. But we can’t remember one offering a bottle of champagne to a lucky winner if they bought their ticket before the end of February. Of course, gimmicks aside, fringe theatre lives and dies on the quality of its shows. And we reckon Pine Street Productions‘ Dirty Hearts is one that will be worthwhile even without the bribe of that champagne.

So, we thought we’d ask the play’s writer, Paul Murphy, just what it’s all about and why they highlight their No Covid, No Brexit, No Boris rule!

Let’s start with the obvious, what can you tell us about Dirty Hearts?

Dirty Hearts is a comedy about the relationships between four friends – Julienne, Ben, Simon and Laura, and what happens when Ben asks Julienne to authenticate a painting owned by one of his clients. It’s about love, truth, friendship and choice.

You describe it as “An Existential Comedy for the Age of Anxiety”. That’s quite the mouthful, but what do you really mean by it?

Everyone has probably said at some point ‘I’m having an existential crisis’: with this show I’m digging a little deeper into what that means. The play is informed by the work of Jean Paul Sartre and Simone De Beauvoir, amongst other. But it isn’t four people sitting around wearing berets and asking; ‘What does it mean to exist?’ It’s about the choices we make and how those choices are what define us as people. It’s about how we see ourselves and how that image of ourselves isn’t always accurate, especially when we’re faced with hard decisions.

The play looks like it will question the morals of its characters. Is that a fair assessment?

Moral choices are absolutely at the heart of the play. What’s the right thing to do? Do markets have a responsibility to be moral? The tension between moral absolutism and what Simone De Beauvoir called ‘the ethics of ambiguity’. If that sounds too heavy, don’t worry there’s still plenty of jokes. This isn’t a philosophical symposium, it’s about four people trying to make choices under pressure: the conflict between our ethics and our desires.

How do wealth managers, art appraisers, doctors and conflict resolution all tie together in the play then?

Ah, well you’ll have to come and see the play. But the story revolves around one of the characters being asked to authenticate a recently discovered Renaissance painting. That’s the art. The fact that it could be worth tens, if not hundreds of millions of pounds means that for two of the characters the stakes are huge. Conflict resolution provides a framework for how we attempt to resolve conflict, and as every doctor has to abide by the Hippocratic Oath we have a a set of ethics and values that are put to the test. The push and pull of the rational scientific approach and the irrationality of human desire. And when you add love into the mix….

You make clear in your press release that “This play makes no mention whatsoever of the following: COVID, BREXIT, or Boris Johnson”. In that case, who do you feel should come to see Dirty Hearts?

The No Covid, No Brexit, No Boris is just my way of saying that if you want a break from the headlines, then this is the show for you. There has been, and will continue to be, some very good work that examines the last few years. But this is a play about conflicting values in a more universal sense, so wherever you sit on the political spectrum there will be an argument that you can relate to. If you think we need a re-evaluation of values as a society you’ll like Simon, if you think capitalism isn’t such a bad think then Ben’s your guy. Need a rational approach to decision making? Laura makes the case. And if certainty is important to you, then Julienne has it covered.

Dirty Hearts is a comedy about relationships, so it’s for everyone, regardless of age, background, politics. Everyone has been in love, or been through a heartbreak. If you’ve fallen in love, fallen out of love. Been torn between friends, had to make difficult moral choices, then this is a show for you.

What made you decide to give away that bottle of champagne? Are we still seeing difficulties in filling seats in fringe venues because of the massive ticket discounting happening at the larger venues?

The champagne: well, the play’s above a pub so that seemed appropriate. Selling tickets is always tough, especially for a small independent production. But we have four terrific actors who you will have seen in TV shows like Harlots and The Crown and from work at places like The Almeida. There’s a fantastic director and a wonderful creative team (the set is really going to be something special) so this is a high value production, with tickets at £20 at the most, so it’s a bargain.

And what next for Dirty Hearts and Pine Street once this run is completed?

The next play we’re hoping to do is Unicorn, a three hander set in a tech start-up. Dirty Hearts was only possible because of an investment in Tesla, so Elon Musk, if you’re reading this, send us a cheque for the next one.

Thanks again to Paul for finding time to chat to us about the play. You can catch Dirty Hearts at Old Red Lion Theatre between 5 – 30 April, bookings can be made via the below link.

Previous: Interview: C’mon Kids, Get Writing
Next: Interview: Lucinda Spragg Telling It Like It Is