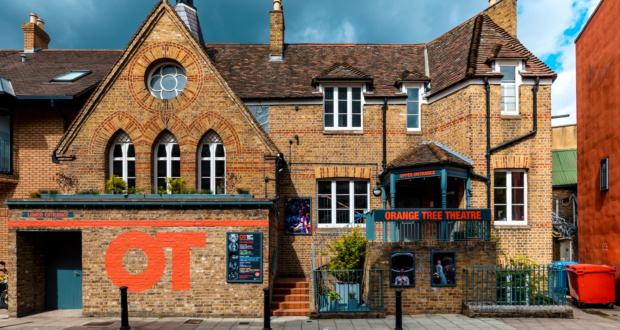 Photo credit @The Other Richard

So Laura, this exhibition celebrates 50 years of the Orange Tree Theatre in Richmond. Can you tell us a bit about how it came about?

It was really the brainchild of one of the Museum’s former Trustees, who is also a Patron of the Orange Tree Theatre. I began in post this time last year when sadly both organisations were closed to the public due to the pandemic, so when they reopened after the best part of 18 months it seemed a really good opportunity to celebrate the resilience of cultural institutions like ours.

The more I worked on the exhibition, the more I discovered the similarities between our two organisations. Not only are we two independent charitable and cultural institutions in Richmond, but I realised how theatres and museums as places are alike in being intrinsically tied to physical space, physical objects and physical interaction. There’s a sense of the here and now, with an emphasis on ‘the real thing’; the authentic.

We conducted around twenty oral history interviews with a selection of writers, actors, directors, staff and people involved at the Orange Tree over the years, and this greatly informed the exhibition’s content. Some of these people were there from the very beginning such as Sam Walters and Auriol Smith, who founded the theatre in 1971. Others have been involved more recently such as the actors Liz Heery and Peter Davison, who are Orange Tree Ambassadors and Youth Theatre parents.

Richmond has a long history of theatres, but the Orange Tree is unique in being in the round. Have you discovered other significant features about it through your research?

From the interviews, there’s been an overwhelming sense of the Orange Tree as a family institution, and in particular an extension of Sam and Auriol’s living room! Staff members are incredibly affectionate, and many have done every single job going, above and beyond the call of duty; maybe being roped in as an extra at the last minute, or sourcing a grand piano for that same evening. Often staff have stayed much longer than they originally thought they would.

The Orange Tree is actually said to be London’s only permanent theatre in the round, and that format stems from the theatre’s origins in a room above the Orange Tree pub, which first hosted its initial incarnation as the ‘Richmond Fringe’. The round space really lends itself to a sense of togetherness, intimacy and community, and from the very beginning in that pub room the audience were able to be very close to the actors and stage, just as they are today. The Orange Tree’s Artistic Director, Paul Miller, describes this gathering together as like the oldest form of storytelling, going back centuries.

The Theatre has a reputation as a ‘writer’s theatre’, with the focus often on the text itself in productions, so staging and costume are generally pared back to let the script shine through. It’s especially well known for the combination of reviving old and forgotten plays, from writers such as Harley Granville Barker and Terence Rattigan, whilst championing new writers like Martin Crimp or Vaclav Havel, and more recently the acclaimed modern playwrights Alistair McDowall and Zoe Cooper.

Tell me a bit about the founding of the Orange Tree in that pub room, and what changes it has had over 50 years.

‘Richmond Fringe’ as it was then known founded was in 1971 by Sam Walters and his wife Auriol Smith. Sam was an actor and director, and Auriol an actress. They felt the need for a local, independent theatre venue outside of the West End and invited theatrical friends and former colleagues to help choose a suitable space. The group went on a pub crawl – well, two actually! – to find it, and eventually settled upon the upstairs room of the Orange Tree pub. And it really was just a room, with no stage, no backstage space, no seating or any of the normal trappings. Without artificial lighting, shows were performed at lunchtime in the daylight, and very nearly in the round.

During my research I came across the now infamous story of the company’s first performance, Go Tell It on Table Mountain. Sam and friends had been expecting a handful of audience members to show up, but there were over 100 waiting to get in to the first performance, so he had to ask them to go for a pint in the pub downstairs and come back later, when they would perform it again. Shows were regularly oversubscribed from then on, with queues around the block and everyone clamouring to get in

The first big change came in 1975 with a refurbishment to the pub. It became a licensed theatre, with fire exits, church pews and an office-cum-dressing room. Later, in 1991, they moved to the current venue, and formally established the space as in the round.

Sam Walters retired in 2014 after 42 years at the helm, by which time he was longest-serving Artistic Director of a British Theatre. But Paul Miller then arrived and put his own stamp on things: some brave new productions such as Pomona and An Octoroon were incredibly successful and perhaps brought in a new crowd. The theatre’s ethos remained, however, with its focus on writing, the in the round format, and community.

It’s not all been easy going though. The theatre lost all its Arts Council funding on Paul Miller’s very first day, so that was challenging! When the pandemic hit, the theatre really had to draw on its creativity, introducing live-streaming shows and then offering productions for socially-distanced audiences once it re-opened.

You are going to be talking to the Richmond Local History Society about the exhibition next month, in conversation with Paul Miller. This sounds like a great opportunity to extend the reach of the Orange Tree’s story! How does it feel bringing local heritage and a leading edge, contemporary performance space under the same umbrella?

Great! We have a lot of similarities and this a wonderful opportunity to crossover our audiences, some of whom may not have visited the other venue. Interestingly, we discovered in interviews about the Orange Tree’s heritage that the Museum’s current location was for a short time even considered as a potential new venue for the theatre in the late 80s, and their offices were, for a while, across the road from the Museum in one of the buildings I can see from my office, so we have close historic ties too!

Is it fair to say that both the Museum and the Theatre play important roles in the community?

Absolutely, and they are just natural partners. The theatre was really pioneering in community work, setting up an education and participation programme back in the early 80s. They took musicals into old people’s homes for singalongs, and in 1982 one of its trainee directors Antony Clark set up workshops to bring Shakespeare into schools. This is still done as Primary Shakespeare, for pupils who may never have been to the theatre before. It also has its Youth Theatre, which is going strong.

The Orange Tree had to raise £750,000 in the late 80s/early 90s in order to move into its current home, and it’s a testament to its place in the local community that this was achieved through raffles, fundraisers and donations.

Similarly the Museum offers the community a chance to learn about its local history and see real objects. We run family workshops, outreach activities like talks, handling objects and summer fairs, as well as being supported by a team of around 25 volunteers, most of whom are locals.

Together we are running a learning and community programme to accompany the exhibition including curator tours, family workshops in school holidays involving storytelling and Arts Award summer schools where students will have chance to visit behind the scenes at the Orange Tree before participating in arts and crafts activities at the Museum.

There are so many different artefacts, images and interviews in the exhibition; do you have any favourites? 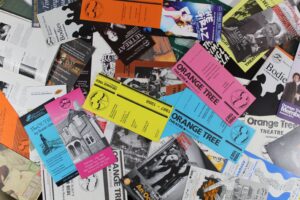 The incredibly realistic rabbit’s head from An Octoroon and the Cthulhu mask from Pomona are both extraordinary artefacts, and it’s exciting to have them here, not just because they are so cool, but also because it’s not every day that we get to display something like them in the Museum’s showcases.

I was particular happy to find a few images from The Room at the pub in its early days, complete with church pews, ‘do not disturb’ signs and makeshift storage. And then the interviews are all so fascinating, particularly those with behind the scenes staff like the Technical Manager and Wardrobe Supervisor, and a former Theatre Manager talking about how ‘the show must go on’; sewing hems at midnight, converting the stage to a swimming pool, a garden and growing real flowers onstage, trying to find enough seats to cram as many people in as possible.

We’ve also had some wonderful memories about audience interaction from Sam Walters and the actress Clare Moody, which are well worth a listen.

The exhibition is running until 31 August – will there be a life for it afterwards?

We have just released an online version, which will give it a whole new life, beyond the physical collection, and importantly will give further access, allowing people to listen to the interviews from home.

There’s a possibility that the Royal Holloway Archives, where the Orange Tree Theatre’s archive material is currently kept, will be able to acquire audio interviews. All the material they hold will eventually all be catalogued, digitised and made available online for future researchers

And our fabulous partnership with the theatre will, of course, continue. The Orange Tree are running their 50th anniversary season throughout the year, so check out their website for plays and events.

Many thanks to Laura for taking the time to chat with us.

The Museum of Richmond’s Exhibition OT50: Fifty Years of the Orange Tree Theatre runs until 31 August and is free to attend. https://www.museumofrichmond.com/whats-on/

It is also available online here.

Laura Irwin will be in conversation with Artistic Director Paul Miller for the Richmond Local History Society on Monday 14 March. Tickets are free to members, and non-members can pay £5 to attend. Book via the below button.