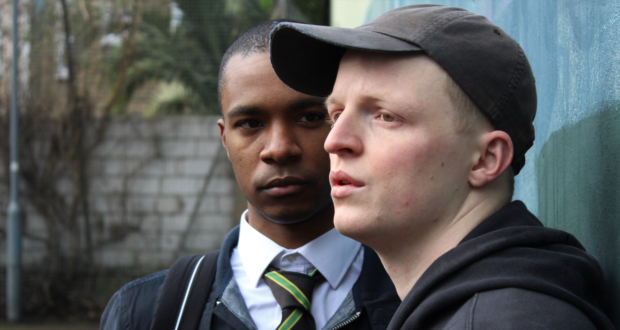 Author: Everything Theatre in Features and Interviews 4 March 2022 0 314 Views

Award-winning new play, Bacon, explores masculinity, sexuality and class through the eyes of an unlikely friendship.

“London, present day, it’s Year 10’s first day back at school. Mark is new, Darren is out-of-control. Mark is too scared to make friends, Darren too scary. These boys need each other, but neither of them is going to admit it.”

Bacon is about what happens when teenagers learn to bully and humiliate each other before they learn to love and accept themselves. The play is based on real events. It’s two central characters, Mark and Darren, were born from a real act of bullying I witnessed whilst working as a nanny. I began to wonder if the seven-year-old boy I was looking after might grow up to copy that behaviour, which led me to explore the idea of learning negative behaviours in my writing. Subsequently, other experiences attached themselves to the story. I began to connect the bullying incident to an intense and semi-toxic relationship I had experienced growing up. It was a confusing, dangerously exciting time; and through the play I intend to encompass that light, teenage, carefree lack of perspective, full of blindness. Remember, if you will, how difficult it is to learn how to be an adult when you are still a child.

Some people have asked me why I chose to write from the perspective of two teenage boys. Others seem surprised to discover that I am not male, while the play is seemingly rooted in masculinity. It is true to say that I have observed the behaviour of men more than the behaviour of women because men, historically, have been more visible. This is perhaps why I am drawn to writing male-dominated stories. I often feel my natural viewpoint is an open one, not particularly connected to gender. Mark and Darren are the characters through which I can best tell this story and their journey makes perfect sense to me. A number of people, regardless of age or gender, have said on reading the play, ‘this is my story’. The notion that the boys’ story is, in some ways, everyone’s story, is what makes it a complex and vital narrative through which to explore identity and sexuality. The play also explores the binaries of class in relation to sexuality, and how confidence and acceptance can be closely related to social standing, from family to family. 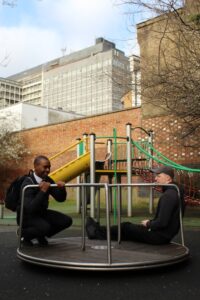 The play’s own journey to stage has not been an easy one. Thanks to the pandemic, it has faced two postponed runs, one in London, one at the Edinburgh Fringe, but being able to at last share it with audiences at the Finborough Theatre is something I am hugely grateful for. Seeing it come together in the lively buzz of rehearsals fills me with joy and the playful energy that the cast and director are bringing to the piece is really breathtaking. The production is fearlessly directed by Matthew Iliffe and stunningly designed by Natalie Johnson, who have worked in collaboration to physicalise the central notions of unevenly distributed power and control within the play. Mark is played by Corey Montague-Sholay, who will melt your heart, and Darren is played by William Robinson, who will break it.

Bacon is a relationship drama for the modern age. At once tragic and euphoric, it questions whether we can do better to guide teenagers through the process of becoming adults. At the heart of Bacon, is the study of the journey from boy to man, and why so often, boys fail to make it there.

You can also read our 5-star review of the play here.