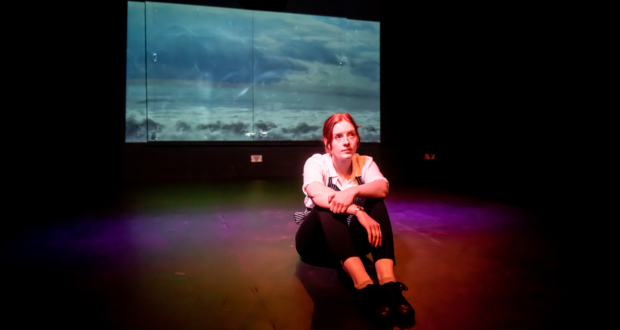 How would you react if the place where you were born, had lived all your life - a place full of memories - was suddenly given up on by everyone else? And because it is no longer economically viable to maintain sea defences, within 30 years the whole town is to be decommissioned, allowing the rising sea level to come in one final time and never leave again? This is what has really happened to the Welsh village of Fairbourne and it is the inspiration for Tom Foreman's Swell. Even with 20 years left before its officially being allowed&hellip;

This play about the bond between siblings abandoned to a town that itself is being abandoned is a lovely study of loss and devotion.

How would you react if the place where you were born, had lived all your life – a place full of memories – was suddenly given up on by everyone else? And because it is no longer economically viable to maintain sea defences, within 30 years the whole town is to be decommissioned, allowing the rising sea level to come in one final time and never leave again? This is what has really happened to the Welsh village of Fairbourne and it is the inspiration for Tom Foreman‘s Swell.

Even with 20 years left before its officially being allowed to disappear, the town of Swell begins a slow drawn out death as people and businesses give up one by one, divided between those “who care enough to stay” and those “wise enough to leave”. First to go is Addy (the underutilised Jayant Singh), leaving along with the dog food factory that provided much of the employment with the town.

Of course, the town’s decay is very much the backdrop for the real story; the personal losses and sacrifices siblings make for one another when no-one else is there for them. Ava and Josh (Annabelle Lewiston and Max Beken) are those siblings, hit hard by the news that the place they have always called home will one day be taken from them. With their mother having walked out long ago and their father dying of a heart attack before they left their teens, the pair have always looked out for each other. Although it’s more a case of Ava, older by two years, having looked out for Josh all that time. Even with her support, it’s Josh that is affected most by the town’s decay; unable to hold down a worthwhile job as the lack of opportunities dwindle, and slowly succumbing to the rot that the town is suffering. And whilst he declines, Ava soldiers on, sacrificing any chance of a better life in a futile attempt to keep Josh safe.

Much like Lately, which played at the same venue last year, there is much to lament about the demise of our seaside towns and villages. But whilst Lately focused almost solely on its two central characters, allowing them to develop in front of us and draw us deeper into their lives, Foreman’s Swell takes a wider look at the idiosyncrasies of life in a dying seaside town. There feels as if there’s a slight nod to Under Milk Wood, as Foreman introduces a collection of amusing characters, brought to life well by the three strong cast. Beken does bag the biggest laughs as he goes through his repertoire of eccentric older women.

It’s perhaps this decision to include so much outside of the sibling relationship that causes the one big problem for Swell. As good as the writing is in studying the effects on the town and its people, as the story draws to its dramatic conclusion it doesn’t quite have the heavy hit it deserves. As the siblings’ lives are torn apart due to the desperate situation they find themselves in, there is almost a sense of ‘oh well’ rather than the heartbreak it should offer the audience. Foreman is clearly a great writer, so it might make more sense to focus on his central characters to ensure the audience are left feeling their devastation even more. As it stands, you just don’t feel as invested in Josh or Ava as you really should.

But less than satisfactory ending aside, Swell tackles the difficulties of the bond between siblings growing up in a dying seaside town with a delicate hand. And it’s a nice touch that the play ends almost as it starts: a knowing nod to how life in a small town for those condemned to remain never really changes. At least not until the sea comes in that one final time and devours everything that they call home.

Previous: Interview: We Consent to these questions
Next: Review: No One Is Coming, Riverside Studios