Home » Features and Interviews » Interview: In the End Zone with Pravin Wilkins

Interview: In the End Zone with Pravin Wilkins

Author: Everything Theatre in Features and Interviews 17 February 2022 0 394 Views

Theatre503’s International Playwright Award really is an incredible thing; how this tiny pub theatre manages to attract entries to its bi-annual award from all around the world really demonstrates just what a reputation it has.

And of course, it’s always great to see many of the shortlisted plays finding their way onto the stage in the coming year or two. Which brings us nicely to Moreno, 2020’s winning entry, which will be making its stage premiere in March.

This debut play by Pravin Wilkins brings the world of American football to 503’s stage, although it isn’t so much about the sport (the stage just isn’t big enough for a game of American football after all), but about the fallout caused by the actions of one player: Colin Kaepernick is the man who first took the knee and started a movement, but at great personal cost.

With such a heated topic at its core, we jumped at the opportunity to chat with Pravin, to find out more about the play and what brought him all the way to this little pub theatre in Battersea. 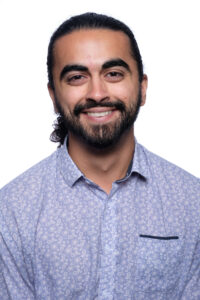 How did you even hear about Theatre503’s International Playwright Award in the first place? And is it something you will be telling everyone to get involved in for its next edition?

I came across Theatre503’s International Playwriting Award on Playwrights’ Center, a resource that many playwrights use to keep up on submission opportunities. Of the numerous open submissions I have sent my work to, Theatre503 far and away offers the most complete package, from the perspective of a playwright. It’s already something I’m telling my playwright friends to send in work for, especially as submissions for the 2023 award have recently opened.

Has winning the award helped with your work back at home in Pittsburgh?

To put it simply and honestly, not yet. I expect the boost to my playwriting career will really start when the play does go up at Theatre503 and people have a chance to see my work fully realised on the 503 stage. Since I won the award in 2020, some exciting opportunities have arisen – yet, with COVID-19 pushing theatre into relative dormancy in the US until quite recently, I’ve mostly been on my grind as an educator and organiser, preparing for this moment.

Moreno is your debut play: is 503 getting the world premiere? And will you be here to see it happen?

I’m thrilled to say that Theatre503’s production will be the world premiere and I will be travelling to London for some rehearsals as well as previews and performances.

The play is set in the world of American football: were you ever worried that doing this would alienate audiences from outside of the US?

Not at all. I recall when I was younger, the film Invictus, which centered around rugby, was quite popular in America, although the sport is not widely viewed there. I feel this is because that film, much like Moreno, is not solely about the sport, but about the people who play the game and the politics they must deal with as national (and sometimes international) figures. The personal drama between the characters in Moreno is universal, and the broader conversation about racism in sports and societal structures at large extends far beyond the borders of America, as these issues affect every nation in the world.

Oscar Russell is credited as “football coach” for the play, which seems an intriguing addition; does that mean we might get to see a quarterback getting sacked on stage (have you seen how small 503’s stage actually is!)?

I won’t speak to exactly what you will see (although, as a former defensive player, who doesn’t love to see a quarterback getting punished??), but some elements of the game will be represented onstage and Oscar’s professional support was instrumental. He helped our actors immensely with the task of embodying each character’s particular role and position. Additionally, Nancy Medina (Director) and Ingrid Mackinnon (Movement Director) have done a masterful job in making these moments work on the small stage at the 503.

Colin Kaepernick’s career seems to have been seriously curtailed by his taking the knee: is this something you wanted to address in your play – that politics and sport are not always easy bedfellows?

Yes, Colin Kaepernick’s career was cut short because of backlash from NFL owners and management along with many fans, media personalities, and indeed the former President himself. But politics, especially the politics of race and class, cannot be separated from sports, or, frankly, any part of society. These issues are universal: Kaepernick taking a knee during the national anthem in protest of police brutality did not bring politics to sports, it brought up the fact that it’s already there. Being the messenger of necessary but unwelcome truths is indeed a tall task, and a dramatically charged situation that Moreno explores.

From our viewpoint on this side of the world, it felt like American football showed a very racist core with its spectators. Would that be a fair assertion, or was it just a microcosm of what was happening across the country?

I don’t like to paint with a broad brush, but I will say that the hate and vitriol coming from NFL fans certainly drowned out the support and love for Kaepernick amidst his protest. If you were to go to an NFL or a Sportcenter comments section on a social media article about Kaep from around that time and just check out the hateful things people were saying… it was despicable. People were demanding he never be allowed to play again, some even posted videos of themselves burning his jersey. Yet, with the election of Trump, a famously vile torch-carrier of racism, I think we saw clearly illustrated that there is indeed a deep and enduring white supremacist element all across the country. So yes, the response of NFL fans to Kaepernick’s protest reflects a broader attitude across America.

Taking the knee became very political both in America and the UK, with various politicians coming out for and against it, most famously Trump himself. Is it still talked about much in America, and is it still causing such division?

The symbol of taking the knee not only continues to be widely discussed, but it has come up again in a tangible way with Eminem’s kneel during the Super Bowl LVI Halftime Show receiving both praise and criticism from both sides of the political spectrum. Moreover, athletes across the world – from soccer players on the US Women’s National Team, to Olympic fencers, to European footballers – have taken a knee during performances of songs celebrating national pride at major global sporting events: this has become a universally understood symbol of protest against injustice, particularly racial injustice. The Monday after the Super Bowl this year, MSNBC commentator Joy Reid wore a Kaepernick jersey as she and a co-host spoke about the halftime show and the ongoing lawsuit by former NFL coach Brian Flores alleging hiring discrimination. So yes, both the symbolic statement of taking the knee and the substance behind it remain highly relevant and continue to reveal divisions in American society.

Do you feel that the racism around the booing is the same in America as in the UK? Do you feel it has made a difference at all, and is it something that will ever change?

I don’t know enough about sports in the UK to comment on whether the reaction of fans to players’ races or their stances on racial issues are the same as they are in the US, but I believe it is fair to say racially-charged jeers come from the same root, regardless of the accent in which they are shouted. And while you can’t really get a booing crowd to stop booing, you can influence who makes up that crowd and how they view the players who make their entertainment possible. This change will occur if the NFL and other large sports organisations focus more on diversity in hiring at the uppermost levels, along with more outreach to fans from Black and brown communities. Because of people like Brian Flores, a former NFL head coach who is fighting right now to hold the league to account for likely subverting rules designed to bring more people of colour on as coaches, there is the possibility that things will improve. But with Colin Kaepernick’s NFL career effectively snuffed out by almost-certain collusion among NFL owners (who paid an untold sum to Kaepernick to keep the details of the court case under wraps), it is clear that progress will be slow and often hindered by reactionary forces.

What’s next for you? Is sport something you would like to centre future plays around, or will you be stepping into new fields for your next work?

I love sports, but for me it moreso is social movements that are at the centre of my work. The setting of American football is simply one arena in which these conflicts play out. Most recently, I have been interested in labour movements and the history of American unions. I am working on two projects in this vein: first, a play centring on a group of fictional university campus workers in San Diego, California who must consider bucking their union representation when it appears their leaders are colluding with administrators; second, a TV drama set in late 1800s Chicago, covering the events that culminated in the Haymarket Riots and the unjust execution of four anarchist labour organisers. The aim of the former is to spotlight and investigate the burgeoning modern revival of unions; the latter, to pay homage to the workers and organisers of generations past, whose struggles are inextricably linked with ours. Someday, however, I am sure I will return to sports – maybe I’ll write something about basketball.

Our thanks to Pravin for his time to chat to us. Moreno opens at Theatre503 on 1 March, and then plays until 26 March. Further information and booking via the below link.