Home » Features and Interviews » Interview: Getting into a Pickle with Deli and Tanya

Interview: Getting into a Pickle with Deli and Tanya

Pickle is a play about being a young Jewish woman, balancing the two sides of your life; that of being from a Jewish family and the other of just being a young woman. We struggled to think of many other examples of theatre exploring the young female Jewish experience, so we thought we’d like to find out more from the show’s writer/ actor and producer. It was a lot of fun chatting to Deli and Tanya, as well as a wonderful chance to learn a little more.

The show itself was scheduled to play at Vault Festival, so became yet another casualty when the festival was cancelled. This interview was recorded at the end of 2021, prior to cancellation and so there are a couple of Vault mentions.

However we’ve been assured the show will see life on stage soon in 2022, so we thought it still more than worthwhile to share this interview with you.

If you want to keep an eye out for when this show will be on stage, we recommend you follow both Deli Segal and Tanya Truman on Twitter. 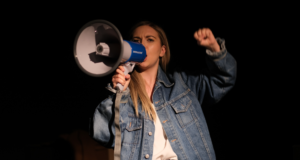