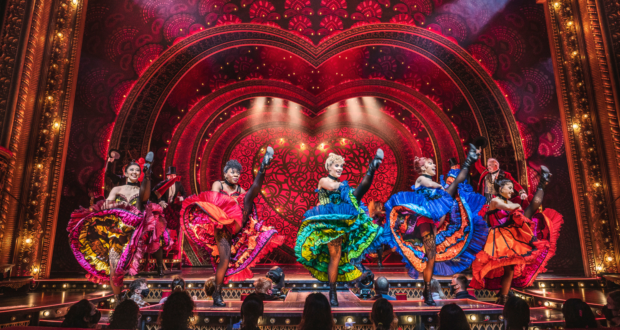 As the West End slowly starts to peek through the curtains once more at a post Omicron world there really isn’t a better show to celebrate the sheer tenacity of the arts than Moulin Rouge! The Musical. At its red velvety heart this show champions life, survival, passion and the all-important love, making for the perfect escapism we all need right about now mon cheri. Covid has hit this production hard with its opening night twice postponed, so for this hotly anticipated spectacular to finally open her sparkly doors to packed crowds is sheer joy. As soon as you&hellip;

A mesmerising mind-blowing joy ride of theatrical splendour at its very best!

As the West End slowly starts to peek through the curtains once more at a post Omicron world there really isn’t a better show to celebrate the sheer tenacity of the arts than Moulin Rouge! The Musical. At its red velvety heart this show champions life, survival, passion and the all-important love, making for the perfect escapism we all need right about now mon cheri.

Covid has hit this production hard with its opening night twice postponed, so for this hotly anticipated spectacular to finally open her sparkly doors to packed crowds is sheer joy. As soon as you step through those doors your troubles are well and truly left behind as you are catapulted into the sultry hedonistic world of the iconic Moulin Rouge. The energy from the cast already mingling around us, plus the attention to detail across the auditorium is both electrifying and jaw dropping.

Thanks to SeatPlan we’re seated in the very core of the show in its stunning can-can area built as part of the stage. It’s breath-taking, so while taking it all in we loosen our suspenders and quickly upload our view-from-seat photos onto SeatPlan to start earning those double points that take us a step closer to nabbing a £10 theatre voucher. I’ve never been so close to the action of a show before, it feels like I am literally in it. I can honestly say without any hesitation that this was one of the best nights of my life.

From the giant blue elephant covered in diamonds to that infamous red windmill, the go-go cages on both left and the right to the sumptuous scarlet velvet curtains that wrap around the entire theatre, Derek McLane’s set design is eye-popping splendour. There is so much to see and devour in this sensory overload of a show with a set, and how it works, being magnetizing. Based on Baz Luhrmann’s iconic film, now celebrating its 20th anniversary, Moulin Rouge! has been remixed for today into a mash-up extravaganza for the stage like no other. Featuring over 70 pop and rock songs spanning 160 years, your feet start and don’t stop tapping as soon as you hear those clicking fingers and gitchie, gitchie, ya-ya, da-da. Some stand out musical numbers, of which there were many, must be the brilliant ‘Can-Can’ within the first few minutes and the Lady Gaga ‘Bad Romance’ mash up which opens act two. I could watch these over and over and over again.

If you’ve not seen the film, where have you been? But for those diehard fans, of which there were 1200 of us screaming in Piccadilly Theatre, this show does not disappoint. Through Alex Timbers wonderful direction, Sonya Tayeh’s heart stopping choreography and Tony Award winner Catherine Zuber’s stunning costumes, Baz Luhrmanns’s visionary and groundbreaking movie of truth, beauty, freedom and love transcends to the stage perfectly.

The sheer dynamism of this cast is quite something. Granted I’m seated in the can-can area so could feel and see the sweat while being ruffled by passing chiffon or a feather boa throughout. It’s a very tight ensemble, however it’s the support cast which stand out for me more than the leads. Clive Carter as the legendary Moulin Rouge impresario Harold Zidler, is intoxicating. Simon Bailey as The Duke is pure evil and both Jason Pennycooke and Elia Lo Tauro as the Bohemian duo Toulouse-Lautrec and Santiago are magnificent. Doomed Satine is played to perfection by Liisi LaFontaine and her glittery arrival, literally above me, singing ‘Diamonds Are Forever’ is outstanding as is her more heartfelt ‘Firework’. Newcomer Jamie Bogyo as the puppy eyed aspiring writer Christian just didn’t have the believability that this love story needs, so I sadly struggled to connect with him and therefore the main theme of this stunning show – l’amour – but I didn’t mind as I revelled in everything else happening around, next to and above me with gay abandon.

This production is a spectacular spectacular, so get those fishnets, bustiers and garter belts dusted off and pop the champagne because your wildest dreams are about to be realised… Welcome to Moulin Rouge! The Musical.

Directed by: Alex Timbers
Based on the book By: John Logan
Choreography by: Sonya Tayeh
Lighting by: Justin Townsend
Music Supervision by: Justin Levine

Mouline Rouge: The Musical is currently booking up to 23 July. Our press tickets for this performance were kindly provided by SeatPlan, where you can upload photos from your seat and earn rewards towards future theatre trips. Further information and bookings can be made via the below link.

Previous: Book Review: My Name is Not Wigs! by Angela Cobbin
Next: Review: The Highwayman, The Space