You can use WP menu builder to build menus
Home » Reviews » Musicals » Review: Bat Out Of Hell, New Wimbledon Theatre 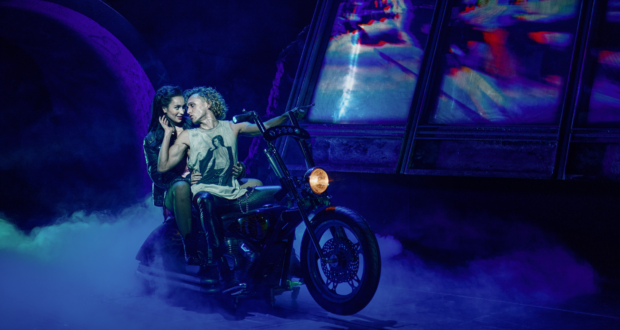 Like a mix between Peter Pan and Repo!&nbsp;The Genetic Opera, Bat Out of Hell welcomes us into a badly explained post-apocalyptic world where ‘something’ has cursed the youth to freeze at age 18, and morph into a Greenday-esque portrayal of rock.&nbsp;Throw in a little Romeo and Juliet romance between an innocent virgin and a bad boy from the streets,&nbsp;contrast that with her parents’ unhappy relationship, and that’s about it plot-wise.&nbsp;Hardly The Matrix. The narrative feels like a vehicle – or motorcycle if you will – to fit as many Meatloaf hits into two and a half hours as possible.&nbsp;Add&hellip;

‘The father of the rock ballad’ and creator of a genre (‘Steinmanesque’), Jim Steinman’s songs have permeated the cultural consciousness. However, all the leather, Harley-Davidsons and soaring vocals don’t equate to an easy ride for his most famous musical.

Like a mix between Peter Pan and Repo! The Genetic Opera, Bat Out of Hell welcomes us into a badly explained post-apocalyptic world where ‘something’ has cursed the youth to freeze at age 18, and morph into a Greenday-esque portrayal of rock. Throw in a little Romeo and Juliet romance between an innocent virgin and a bad boy from the streets, contrast that with her parents’ unhappy relationship, and that’s about it plot-wise. Hardly The Matrix.

The narrative feels like a vehicle – or motorcycle if you will – to fit as many Meatloaf hits into two and a half hours as possible. Add Jon Bausor’s detailed rockin’ costumes and a couple of glacially slow bikes and that’s pretty much the show. Oh –  don’t forget the fire; there is fire.

The musical, however, knows its audience like the Bat of its hand (sorry unforgivable pun). If you’re a die-hard Steinman-head or Meatloaf lover the songs would be worth the nonsensical dialogue and insipid plot. When they work, the vocal skill of all the performers underlines Steinman’s ability to write a cracking ballad. Glenn Adamson as the Gerard Way-like Strats and Martha Kirby as every teenage goth’s dream Raven, duetting It’s All Coming Back to Me Now with Rob Fowler and Sharon Sexton (goth-chick’s oppressive parents Falco and Sloane) is almost worth the hours it takes to build up to it. Almost.

Sexton is by far the funniest performer and copes well with the highly emotional scenes. As Zahara Joelle Moses’ silky smooth pipes bring some much needed depth to the high register maintained throughout. The title song is as epic as you would imagine. Vocally the main four cope with the challenging range and even manage to ‘rock out’ without making the audience’s skin crawl too much.

The issues arise in the spaces between the songs. After closing in 2019 at The Dominion Theatre, this touring production is understandably a stripped-back version. Having seen the original, a lot of the connecting technical effects are a distraction that is sorely missed.

The love story is one of the most painfully obvious kinds in all musical theatre, with some gothic flavour thrown in for good measure. With the melodramatic nature of the songs a sense of irony would keep this musical in the hallowed vein of Urinetown or Rocky Horror. But apart from a lot of shirtless men and some gyrating the whole affair is deadly serious and therefore vaguely ridiculous.

Practically, the pieces of set feel too large for the stage and leave an odd space into which most of the choreography is forced. The choice of live-filming and projecting the domestic scenes would make sense in the massive Dominion but proves cluttering here, although at points the overlaying of faces can be quite pleasing. Lastly, the world created just doesn’t make sense, leaving whatever happens within it feeling hollow.

Like the Greenday musical American Idiot the subculture sits uncomfortably in a performative and commercialised theatre setting, coming off as disingenuous and affected. However, this doesn’t have to be the case as Hadestown and Jesus Christ Superstar prove that rock musicals flame if they are written well. Despite some impressive vocals, the sludge between the songs drags down the energy of the piece, something that even Dead Ringer for Love’s chorus of ‘Rock ‘n Roll and Brew’ can’t spirit us out of.

Bat Out Of Hell plays at New Wimbledon Theatre until 29 January before touring the UK during 2022. Further information on all dates and booking via the below link.