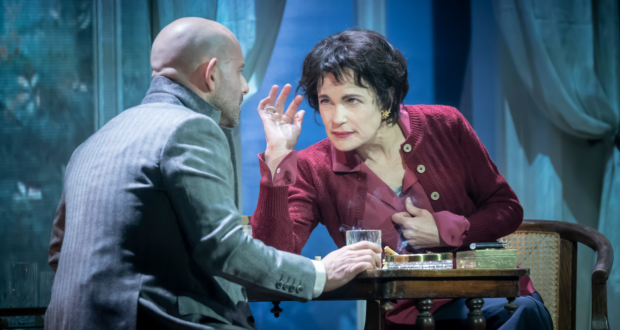 If I had to pick a Hollywood icon as my Mastermind specialist subject it would be Doris Day. Yet I must admit I don’t know a huge amount about one of her contemporaries, Ava Gardner, so was intrigued to see what this show might uncover. Some brief research suggests that Ava Gardner is more than the famous men she married, yet you could be forgiven for thinking that wasn’t the case after watching this play.Elizabeth McGovern, who many will recognise from her role in Downton Abbey, took on the challenge of adapting Peter Evans’ book, Ava Gardner: The Secret&hellip;

A slick production exploring the life of a Hollywood great, with outstanding set designs that steal the show.

If I had to pick a Hollywood icon as my Mastermind specialist subject it would be Doris Day. Yet I must admit I don’t know a huge amount about one of her contemporaries, Ava Gardner, so was intrigued to see what this show might uncover. Some brief research suggests that Ava Gardner is more than the famous men she married, yet you could be forgiven for thinking that wasn’t the case after watching this play.

Elizabeth McGovern, who many will recognise from her role in Downton Abbey, took on the challenge of adapting Peter Evans’ book, Ava Gardner: The Secret Conversations for the stage. She also plays Ava herself, a daunting prospect, I’m sure. The play centres around Peter and Ava’s meetings in her London flat towards the end of her life. While Peter is facing increasing pressure from his editor to get her stories on paper, Ava is less inclined to lay all her cards on the table immediately. As the subject matter turns to Ava’s three famous husbands, McGovern slowly changes her mannerisms to take us back in time, from an Ava struggling after a stroke, to a younger Ava in Hollywood. It’s hard to really know how good McGovern’s Ava is, not being familiar with Ava’s screen presence beforehand.

Anatol Yusef plays not just the writer, but all three of Ava’s husbands; Mickey Rooney, Artie Shaw and of course, Frank Sinatra. Again, not a role to take lightly! Yusef handles the variety with ease, shifting from a writer gradually falling for Ava to the other men she has seemingly bewitched in her life. He even attempts one of Sinatra’s songs, taking over from a recording of the man himself. As the record fades his voice is a welcome surprise. While individually the two actors are strong, there feels a lack of chemistry between them, leaving some of the more tender or heated moments harder to believe.

The press night for this show was delayed due to technical aspects and it’s easy to see why. The set is incredibly complex with lighting effects and moving parts changing the shape of the stage. Riverside Studios was once a TV studio, and so it seems that the lighting and set design has the potential to be incredibly slick. The stage is very large, with black-out panels used to create different windows through which the audience can watch the action. They are also effectively used when actual footage of Ava throughout her career is projected onto screens during scene changes. The problem though is that the play seems to be slightly daunted by the sheer scale of the set and technology. And I craved more of the original footage of Ava. Would this play have had more impact on a small stage in the back of a pub? Perhaps.

The show focuses on Ava’s relationships, as is all too often the case for great women through history, but Ava must have been more than her marriage to ol’ blue eyes. Too much of the narrative around Ava is about her love life, her reputation as a screen siren. There is a sense that she never moved beyond the head of MGM Louis B. Mayer’s words: “She can’t sing, she can’t act, she can’t talk, she’s terrific!”. I would have loved the play to shine more of a light on her career and achievements, moving away from the men and their opinions of her. The play has though sparked something inside me – to find out more about this Hollywood icon. What more can we ask of theatre?

Ava: The Secret Conversations plays at RIverside Studios until 16 April 2022. Further information and bookings via the below link.