You can use WP menu builder to build menus
Home » Reviews » Cabaret » Review: All about Gatsby, London Cabaret Club 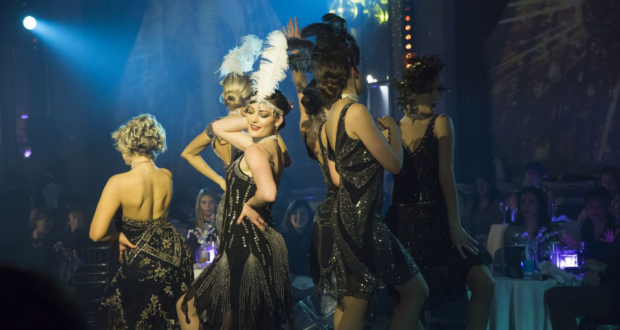 Situated in the sumptuous 1920’s Bloomsbury Ballroom, the space for this immersive adaptation of ‘The Great Gatsby’ is decked out in Art Deco style. Many-mirrored surfaces and pink lights cast shadows over the plastic plants. We glide into the bar and settle in for some “light pre-show entertainment”. Meeting the cast, we encounter an ensemble of talented performers who reappear throughout the night in various costumes, although pretty much doing the same thing. It’s almost a family affair. Paul McDowell is the crooning Frank Sinatra figure, while Hannah Goodman is the all-purpose female lead singer. Both come with impressive&hellip;

Suited, booted, plucked, and tucked we rustle down to the London Cabaret Club for an event loosely based around ‘The Great Gatsby’. However, the event feels more like a P&O cruise around the Caribbean in 1982 than the thumping pulse of New York in 1922.

Situated in the sumptuous 1920’s Bloomsbury Ballroom, the space for this immersive adaptation of ‘The Great Gatsby’ is decked out in Art Deco style. Many-mirrored surfaces and pink lights cast shadows over the plastic plants. We glide into the bar and settle in for some “light pre-show entertainment”.

Meeting the cast, we encounter an ensemble of talented performers who reappear throughout the night in various costumes, although pretty much doing the same thing. It’s almost a family affair. Paul McDowell is the crooning Frank Sinatra figure, while Hannah Goodman is the all-purpose female lead singer. Both come with impressive voices and a good stage presence, but not a lot of uniqueness. We are also introduced to an ensemble of dancing lovelies that drive the evening’s energy levels.

After an hour sipping beers (warning, even the mocktails are £10) we are issued into the main ballroom. This expansive hall is breathtaking; bathed in an orange wash, candles twinkling on each table and screens flanking the space, there’s a thrust stage through the middle, and a firmament of stars dazzle the back wall. Now we are talking!

What follows is neither the grubby, irrelevant cabaret of the Kit Kat Club nor the jazz age world of F Scott Fitzgerald’s classic novel. There are songs from the 60s (Frank Sinatra) modern covers (Britney’s ‘Toxic’ – twice), and musical numbers (‘Top Hat’). Yet despite thematic inconsistencies, the unrelenting roller deck of toned athletic bodies and ballsy vocals keeps on coming.

The dinner aspect is drawn out at a languid pace and the three courses take almost three hours. The food itself is tasty, if a little uninspiring. The cod croquettes are fluffy but rather bland, although the cornfed chicken and sweet potato pavé is filling and succulent. Finishing off, we have a blood orange passion fruit mousse that is delicious, in a coupe glass. The gaps between the courses, however, make you so grateful for the food you would have gladly munched down on a napkin.

Performance-wise, the dancing troupe provides most of the narrative structure; what little there is. They fly on in summery flowing fabrics and tight-knit jumpers for the scene at the Buchanan’s mansion, dazzle in silver and black sequins for Gatsby’s party, and seductively duet for scenes with McDowell, physicalising the love triangle between Gatsby, Daisy and Tom. Their energy is a highlight throughout and certainly distracts us from our growling stomachs.  Duo Odyssey member Maksym Korbun, the resident male hunk and acrobat, does well with the limited stage and performs a Dita Von Teese-esque dance in a giant champagne glass. His skill with the Cyr Wheel is exceptional, although who knows where within the storyline a giant metal ring would fit?

Despite the clear talent, several points make very little sense. The presence of two performing dogs is rather random and unimpressive, and some modern covers feel painfully out of place. Sadly, due to the event being structured like a medieval village, the platinum package guests are all at one end of the room, meaning that we poor folk on the silver and gold packages see a lot of the backs of performers, even with the small revolving stage.  The whole thing seems to be themed more around Baz Luhrmann’s film The Great Gatsby than the novel, with all the features you expect from the 1920s, including feathers, pearls, beads, dancers, champagne, and the biting hunger of the Great Depression. Overall, the effect is an expensive but amusing one.

The London Cabaret Club is flexing its wings, planning to launch this immersive experience in Dubai’s Soho Garden Palm Jumeirah club on 2 February. Interestingly, this move to the east reflects a central theme within the book; the distinction between old money East Egg and the flashy West Egg. And with all the fireworks in champagne bottles, and Frank Sinatra covers, believe me, you’re there kid.

All About Gatsby is currently booking until 26 February. Further information and booking via the below link.