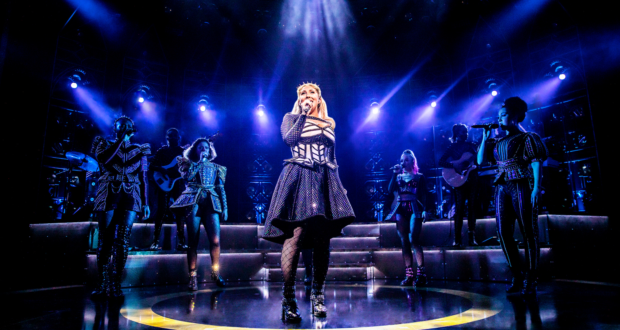 Six The Musical Tickets Six has had quite the journey already, from it’s first performance at the Edinburgh Festival four years ago to its Broadway transfer tragically closing just three hours before opening night due to the pandemic. In fact, one of the Everything Theatre team reviewed the show back in 2018 when it was at the Arts Theatre. Now The Queens are back with a vengeance with a long-term stay at the Vaudeville. It’s no secret that I am a big musical fan, so it was a treat to head to the West End to see the new&hellip;

Six has had quite the journey already, from it’s first performance at the Edinburgh Festival four years ago to its Broadway transfer tragically closing just three hours before opening night due to the pandemic. In fact, one of the Everything Theatre team reviewed the show back in 2018 when it was at the Arts Theatre. Now The Queens are back with a vengeance with a long-term stay at the Vaudeville. It’s no secret that I am a big musical fan, so it was a treat to head to the West End to see the new cast take to the stage.

The show presents the stories of Henry VIII’s wives in a way they could never have imagined. The historic facts are spot on, but the Queens are pop stars, wearing outfits that embrace Tudor silhouettes with traces of Starlight Express and Little Mix’s tour wardrobe. It’s fun. It’s glitzy. It’s a bit silly. But, oh my, it’s a lot of fun.

The Queens are trying to convince the audience that they had the worst experience with Henry VIII by performing individual indulgent pop songs. The music is brilliant, at times straying into pure Eurovision, which is by no means a criticism – ‘Haus of Holbein’ is German techno that would be worthy of douze points. Each of the Queen’s is sensational, possessing incredible voices mixed with humour and heart.

Catherine of Aragon (Collette Guitart) refuses to accept her fate, “If you think for a moment, I’d grant you annulment, just hold up“, and Anne Boleyn (Bryony Duncan) sings “Sorry not sorry ‘bout what I said, don’t lose your head” as though she’s a Tudor Avril Lavigne. Elsewhere Jane Seymour’s (Natalie Paris) passionate ballad almost moves me to tears, while Anna of Cleves (Cherelle Jay) seems to get off lightly; her performance is one of the comic highlights of the night.

A real standout moment (amongst many) is Katherine Howard’s (Zara MacIntosh) song. Historically she’s been branded a bit of a slut; Lucy Worsley’s programme notes say that even in the 2010 TV show The Tudors she’s branded that way. The truth is that she was a young teenager, abused by men in power. Her song, ‘All you wanna do’ starts off comically, channelling Howard’s inner Britney, but as it progresses it gets increasingly uncomfortable as the abuse that she suffered becomes clear.

When Catherine Parr (Danielle Steers) takes to the stage, she puts a halt to the proceedings. She flags that no one would know who they were if it wasn’t for Henry VIII. It risks feeling cheesy, but instead it feels empowering. Much in the way that Hamilton lets Eliza tell her story, Six lets the wives tell theirs. Yes, Catherine Parr survived, but did you know that she also was the first woman in England to publish books in English and in her own name? I didn’t, until tonight.

Six is an absolute joy, it taps into my inner teenage girl – I wish these Queens were here to empower me when I was younger. But letting them take me under their wing in my thirties will have to do. It’s a show with a very passionate fan base, and it’s easy to see why. The woman next to me was doing the final dance routine along with the cast while the women in front were singing along to every word during the finale – while this isn’t something I usually love in the theatre, I’ll let them off as I’ll be there with them next time.

SIx is playing at Vaudeville Theatre and currently booking until 1 May 2022.