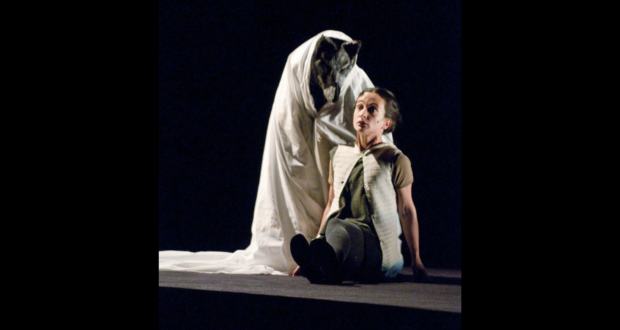 I should have suspected, as I navigated through the bizarre displays of quirky objects within The Coronet Theatre, that this show might be as unusual as the playhouse hosting it. Within this remarkable venue, writer and director Joël Pommerat’s Le Petit Chaperon Rouge similarly takes something that should be quite familiar - in this case the traditional folk tale of Little Red Riding Hood - and ingeniously creates an intriguing and extraordinary experience from it. Like a veritable conjurer, he bewitches the audience with his art, making the invisible become discernible, and blending reality with fantasy. Pommerat created this&hellip;

An extraordinary, beguiling production of a traditional folk tale. Imagination, reality and fantasy swirl around each other, drawing the audience into a bewitching experience.

I should have suspected, as I navigated through the bizarre displays of quirky objects within The Coronet Theatre, that this show might be as unusual as the playhouse hosting it. Within this remarkable venue, writer and director Joël Pommerat’s Le Petit Chaperon Rouge similarly takes something that should be quite familiar – in this case the traditional folk tale of Little Red Riding Hood – and ingeniously creates an intriguing and extraordinary experience from it. Like a veritable conjurer, he bewitches the audience with his art, making the invisible become discernible, and blending reality with fantasy.

Pommerat created this piece to demonstrate to his young daughter what his work was, and it tells its tale accessibly, using many forms of communication to convey an experience as much as a story. From the very start the soundscape is all-enveloping. From the darkness we hear recorded birdsong, demonstrating how little is naturalistic here. This is a stylised, imagined world in monochrome. There is no staging or props. There is no red riding hood in the costuming: it is left for you to create the colour in your own mind. And the audience is undoubtedly an active participant in the realisation of this stunning piece of work, with many nebulous, sensory connections key to how the dramatic encounter cleverly plays out.

Wearing a smart grey suit, the narrator (Rodolphe Martin) simply relates the traditional tale. He stands apart from the action but is vitally connected through his (French) words, which are translated above in surtitles. Around him, Murielle Martinelli as the girl, (and later the grandmother), beautifully enacts what it is to be neglected and lonely. Without her speaking a word, she is assisted in communicating what is happening by the technical features of the show, which create intense atmosphere and palpable emotion. Light is used sparingly, but with great effect, in Éric Soyer’s striking lighting design. Often it barely rests on the faces of the actors, instead simply giving definition to forms and shapes, requiring the audience to fill in missing detail using intimate, imaginative engagement. Apprehension, fear, tension and humour are all impressively manifested through the almost cinematic lighting, and the resonant, visceral sound in Grégoire Leymarie and François Leymarie’s intensely evocative soundscape. I was reminded of the dance work of Pina Bausch, with its similar use of the body as an object, using light to create intriguing shapes and substance where none exist.

The technical excellence of the production is matched by the impeccable acting of the cast. Isabelle Rivoal as the Mother is meticulously choreographed, arriving barefoot and on tiptoe, yet her steps exactly matching the high-heeled clipping heard on the soundtrack. She and Martinelli are flawlessly in sync, as they play out encounters between the various characters they multi-role.

Pommerat’s simple script offers moments of warm humour within the rather dark, disturbing tale, particularly impressively when the ominous, enigmatic presence of the wolf contrasts with his comic, down-to-earth impatience. The danger he presents becomes strangely acceptable as we become familiar with him. He and the girl are shown to share similarities alongside their differences, which offers keen insight into how such a dubious rapport might be rationalised.

This is a production that makes itself understood by drawing on relationships between many elements; between the characters for sure, but also between the audience and the ways in which they are able to understand the narrative. Light, sound, storytelling and imagination all play a part in conjuring a deep and intimate understanding of the experience, which makes it enormously accessible and enjoyable. It is a piece that works for all ages, being simple and complex on numerous levels. I left the theatre feeling exhilarated, entertained and a little spent, as if I, too, had worked on the performance!

Le Petit Chaperon Rouge plays at The Coronet Theatre until 21 November. Further information and booking via the below link.

Previous: Interview: Raising a glass to A Pissedmas Carol
Next: Review: Outside, Rosemary Branch Theatre

By her own admission Mary goes to the theatre far too much, and will watch just about anything. Her favourite musical is Matilda, which she has seen 13 times, but she’s also an Anthony Neilson and Shakespeare fan - go figure. She has a long history with Richmond Theatre; in Marketing, as a tour guide, archivist and volunteer, but is currently having fun volunteering at the Polka Theatre, which makes sense as she is ET's specialist in children's theatre and puppetry! Mary insists on now being called The Master having used the Covid pandemic to achieve an MA in London's Theatre and Performance.