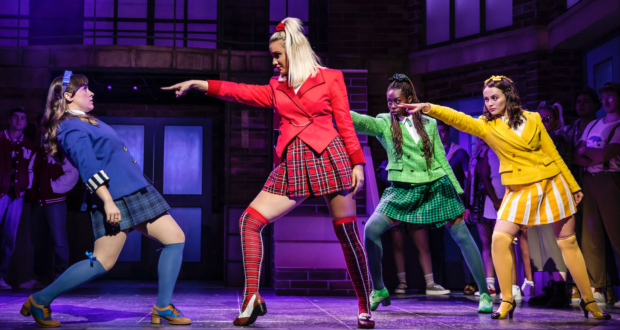 I’m not familiar with the film of Heathers from which this show is adapted. I know it is set in 1989, so I was probably expecting a nostalgic 80s/90s-themed night of fun: but that’s really not what is served up here. The premise of the musical is that everyday girl Veronica (Rebecca Wickes) makes friends with the school ‘popular girls’, all called Heather, using the friendship to secure her own popularity at the expense of her slightly dorky best friend, Martha (Mhairi Angus). Like them, she dons a ‘uniform’ and behaves the way this society expects of her in&hellip;

There’s Big Fun to be had here, as teenage toxins are taken to task in a full-on, no holds barred production.

I’m not familiar with the film of Heathers from which this show is adapted. I know it is set in 1989, so I was probably expecting a nostalgic 80s/90s-themed night of fun: but that’s really not what is served up here. The premise of the musical is that everyday girl Veronica (Rebecca Wickes) makes friends with the school ‘popular girls’, all called Heather, using the friendship to secure her own popularity at the expense of her slightly dorky best friend, Martha (Mhairi Angus). Like them, she dons a ‘uniform’ and behaves the way this society expects of her in order to be a success. She also picks up an indie boyfriend, JD (Simon Gordon) who turns out to be violent and damaged. As Veronica negotiates the many relationships around her, she has to choose her own way to behave.

It took me some time to come to terms with the form of the show. By the end of the first half we’d seen horribly dark issues such as teenage suicide, homophobia, bullying and potential date rape, admittedly accompanied by powerful songs, razor sharp choreography and a lot of comedy; unusual themes for a fun night out, perhaps? I was questioning how some of this content could be so flippantly performed in a contemporary climate, particularly the use of homophobic slurs and eating disorders used as comedy. Even though I ultimately enjoyed the show, the themes are certainly bigger than the production explores. The second half, however, involved revelations which stripped out a number of my doubts, as it cast a critical eye on a society in which such things are allowed to occur.

Director Andy Fickman’s production is big and bold; almost surreal in its colour and inflated characterisations. It’s as if this excessive form imitates the overwhelmingly toxic social pressures in the high school. It lacks the warm, fantasy element of Be More Chill, a similar examination of teenage angst, leaning more towards the overblown, challenging offensiveness of Book of Mormon, and it challenges darkness with light. Heathers explores the point on the razor’s edge between adolescent immaturity and the uncertainty of emerging adulthood; its characters oscillate between sexual empowerment and vulnerability as they negotiate understanding where power lies. Within this nebulous area, Wickes as Veronica is a little pocket rocket, bringing humour and fierce determination to the role. She does a fabulous job of weaving moments of insight into the otherwise cartoon setting, cutting fiercely through the poison with her magnificent performance of “Seventeen” to poignantly remind us of why what we’re seeing is wrong, and what teenage reality could be like.

There is a really strong cast, with fine performances from the entire ensemble. Maddison Firth as Heather Chandler does an excellent job of caricaturing her hateful character, revealing how hers is not a natural way to behave, and her physical performance is sharp and remarkable. There are also standout performances from Mhairi Angus as the adorable Martha, and Rory Phelan and Liam Doyle as Ram and Kurt respectively. They impressively undercut their cartoon roles to offer glimpses of moving vulnerability, important to the message that there are humans beneath the social stereotypes being enacted.

Gary Lloyd’s choreography is sharp, inventive and impressive, particularly in the slow motion and tableau sections. These often shatter the general chaos to allow moments of insightful contemplation in the madness, whilst also being laugh out loud funny. Kevin Murphy and Laurence O’Keefe’s writing does a fabulous job of drawing you in to the black hole of teenage trauma, and then spitting you out, as you question what it is you’re laughing at, whilst the energetic songs are bold and exciting.

This show is a really good night out, filled with laughter and great music. The production confronts the confusion of coming of age and demonstrates the opportunity to rise above life’s darkest moments. It boldly sets up an environment to expose teenage pressures and then offers strategies for breaking out of them by embracing personal integrity and individuality to just have fun.

Heathers The Musical plays at New Wimbledon Theatre until 6 November, then continues to tour the UK until 11 December. An alternative cast will also play at The Other Palace from 25 November until 20 February 2022. Further information on both shows and booking via the below link.

Charlotte has been reviewing with us since the depths of lockdown. Having very recently graduated with a degree in Modern and Medieval Languages from Cambridge she’s already becoming our specialist for any weird German and Russian plays that come along. If it’s got a giant insect in it, she’s there! She’s also a big fan of the Cambridge Footlights, Shakespeare, a cheeky bit of Goethe and of course Hot Gay Time Machine.