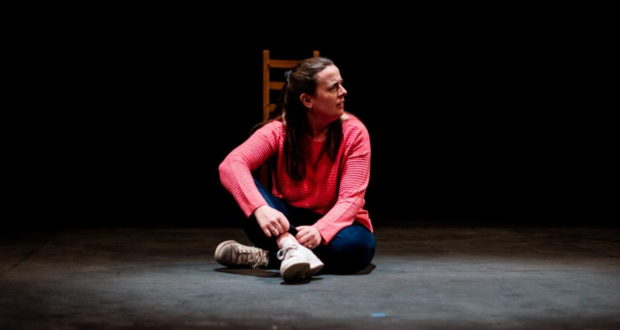 My last visit to The Lion and Unicorn Theatre was two years ago, so after such a long hiatus I was looking forward to seeing Exile, a monologue play set in 2016 and written by Niamh Denyer. As I took my place, the first thing that awakened my senses was the beautiful, but understated music playing in the background. The stage was bare apart from a solitary seat, which always causes me consternation, but I needn’t have worried, as it transpired that nothing more was needed.&nbsp; Exile starts with an atmospheric blackout. Lights come up and we see Darren&hellip;

A play of two monologues, packed with humour and pathos, which addresses the themes of LGBTQ+ and abortion. Both actors deliver beautiful performances in this superbly written piece.

My last visit to The Lion and Unicorn Theatre was two years ago, so after such a long hiatus I was looking forward to seeing Exile, a monologue play set in 2016 and written by Niamh Denyer.

As I took my place, the first thing that awakened my senses was the beautiful, but understated music playing in the background. The stage was bare apart from a solitary seat, which always causes me consternation, but I needn’t have worried, as it transpired that nothing more was needed.

Exile starts with an atmospheric blackout. Lights come up and we see Darren (Sammy Johnson) centre stage, who dynamically starts to talk about ‘home’and what this means to him. He is a taxi driver, married to Lesley, who he has known for 13 years; they are expecting their first child. He recounts undertaking a taxi fare that took him close to where he grew up, where he picked up someone from his past; a man who was his first love at school. Darren recounts, very poignantly, how they fell in love at the age of 13, but how theirs was a secret love. We learn that his father, witnessing two gay men together, commented about them being “pansies”, suggesting that they should be ashamed, and causing Darren to suppress his homosexual feelings for years. Now, the chance encounter has reawakened these feelings. The two meet that weekend when Darren’s wife is away, and share a night of blissful lovemaking. Towards the end of the monologue, Darren introduces us to Donna, a taxi fare he has been assigned for an airport pick up, to be taken to a clinic.

Donna, played by Denyer herself, takes to the stage energetically. In an echo of Darren’s monologue, she begins talking about home and what it means to her. Her home is in Ireland; she tells us that she comes from a strict background, and that “my mum is fairly liberal for a practising Catholic”, but that she is anti-abortion. This monologue is packed full of pace and pathos, but great humour. We hear how, following a drunken one-night stand, Donna finds out she is pregnant. In a laugh-out-loud funny confession she recounts searching for a pregnancy test in Boots, taking the test sitting on a toilet in Costa (good use of the chair!), and then going for a McFlurry.

Many women at the time the play is set felt they had no option but to travel to England to have their abortions performed, and Donna questions why a place that should be home refuses to help women in their hour of need?  She recounts the day of the abortion, her meeting with Darren and how relieved she was that he didn’t judge her, but that they hugged. This brief encounter between the two has a profound impact on them and their futures, and is quite moving. The play contains strong language and LGBTQ+, feminist, and abortion themes, glimpsing back into recent history when abortion was decriminalised in Ireland, but these issues are perfectly balanced with its humour.

Exile is a thought-provoking, extremely well-written piece. Our sympathies lie with both Darren and Donna, both hiding secrets, feeling unable to open up to their nearest and dearest – outsiders in their own homeland. Exile is a stark reminder that life has highs and lows, but that, above all, we should be honest with our loved ones. The writing, performances, soundscape, and lighting are all perfectly pitched, with the actors’ multi-roling to great comic effect within a context of emotive issues. I was in floods of tears at the end as Donna talks of being reunited with her mother. What a beautiful ending to a beautiful play.

Exile plays at Lion and Unicorn Theatre until 20 November. Further information and booking via the below link.