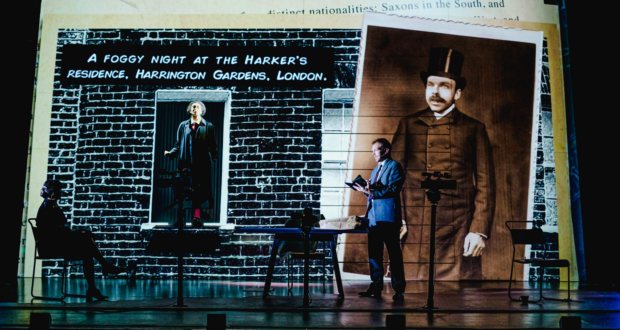 Recorded live at Leeds Playhouse It seems strange to start a five-star review with a moan, but it’s best to get this out of the way early on. Especially as it is something I still can’t get my head around. You create an amazingly visual show, one where much of the actual action occurs on a screen at the back of the stage - a visual treat unlike anything I’ve seen in the theatre before, and yet the director of this filmed version decides more focus should be on the front of the stage, thus surely missing the whole&hellip;

A remarkable visual treat that, whilst utterly stunning to watch, could have been even better but for some strange decisions in the film’s direction.

It seems strange to start a five-star review with a moan, but it’s best to get this out of the way early on. Especially as it is something I still can’t get my head around. You create an amazingly visual show, one where much of the actual action occurs on a screen at the back of the stage – a visual treat unlike anything I’ve seen in the theatre before, and yet the director of this filmed version decides more focus should be on the front of the stage, thus surely missing the whole point of this show! It is, quite frankly, criminal. If I’m watching a show at home, I still want to see what I would be watching were I in the theatre itself, and I can assure you, my focus would be on that rear screen for at least 90% of the time. If I had more time I’d even tell you all about the speech bubbles we don’t get to see that translate when actors slip into foreign dialect.

So, I’d better explain what it is we are witnessing. Imitating The Dog promise a graphic novel on the stage, and that is exactly what you get. The vast backdrop of the stage is turned into a living, moving novel using a variety of stunning tricks. Firstly, the screen becomes pages in the graphic novel style. Then, with cleverly positioned cameras and the use of high-tech gadgetry, the actors or sometimes just their faces, are transposed onto the screen, turning them into live characters inside a caption within the page. At other times, with the use of strategically placed ledges and steps, they climb up the screen to perform alongside the moving graphics. There are even instances when the actors contort themselves on stage such that when seen on film you see a very different aspect. This is most strikingly achieved when it appears that we are viewing the action from above, as they discuss the case whilst sitting at a table, but on the stage what we have is two actors, heads down, talking to the floor! The imagination and thought that has gone into every scene is simply stunning. Which only brings me back to my moan above – why are we seeing more of the actual actors when the real action is happening behind them?

As for the story, it’s just as imaginative as the visuals. It’s New Year’s Eve, 1965, a young woman (Riana Duce) is being interviewed in a police station. She claims to be Mina Harker, known for her involvement in Dracula’s death, except that would make her an old woman in 1965. She tells a story of countless murders she has committed, and whilst the two interviewing her (Matt Prendergast and Adela Rajnović) don’t recognise the names, many of them are well known to us, names that we relate to the worst acts of the 20th century. And that is where this becomes even more interesting, raising the classic philosophical question; if we could go back to 1930s to kill Hitler, would we? It’s subtly done, using news flashes and throwaway comments that on closer inspection tell of a 1965 that isn’t quite the same as our history books tell: in this world things turned out differently because some of the key players died before they could commit their atrocities.

Live, I suspect Dracula: The Untold Story would be one of those theatrical experiences you will never forget. Even watched online it leaves a remarkable impression, causing me to wonder why this show isn’t already booked in for a big London theatre for the duration of 2022: it would surely fill those seats night after night. Even with the questionable decisions within this filmed version, it is still a remarkable piece of theatre that you will watch in awe of what can be achieved with today’s technology. But oh my, what was that director thinking!?

Dracula: The Untold Story is available to view on-demand for just £10 until 31 January 2022. Full details and booking via the below link.

Previous: Review: Carmen, The Lowry (Salford)
Next: Review: Dick Whittington: A New Dick in Town!, Above The stag