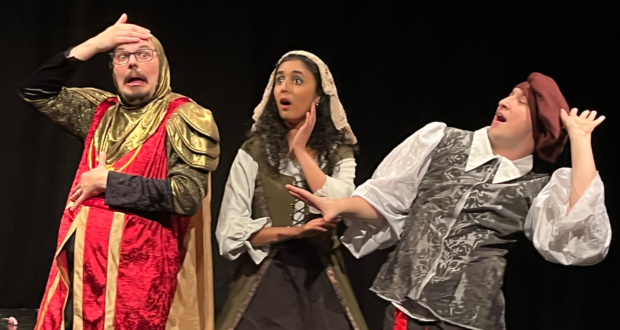 Having recently qualified with an MA in London's Theatre, it seemed only appropriate that I should be the ET reviewer to attend this production based on the works of the great Bard himself. Fortunately, aside from engaging with erudite iambic pentameter, I also like having a right laugh at the theatre, and that's certainly what I got in shed loads with The Northern Comedy Theatre’s Doing Shakespeare. This is definitely not a show that demands an inside-out knowledge of the works of Shakespeare – it’s more about oh so-recognisable characters trying to perform the classics; what happens when ordinary&hellip;

Having recently qualified with an MA in London’s Theatre, it seemed only appropriate that I should be the ET reviewer to attend this production based on the works of the great Bard himself. Fortunately, aside from engaging with erudite iambic pentameter, I also like having a right laugh at the theatre, and that’s certainly what I got in shed loads with The Northern Comedy Theatre’s Doing Shakespeare. This is definitely not a show that demands an inside-out knowledge of the works of Shakespeare – it’s more about oh so-recognisable characters trying to perform the classics; what happens when ordinary people give something a go. But if you do know a bit about the Bard, well, it’s that much funnier.

The Felching Am-Dram Society have cast away pandemic distancing and Zoom calls, finally coming together to perform some Shakespeare live on stage. According to Director, Tom (Robert Stuart-Hudson), they are doing it as it would have been done in the old days, with everyone learning the script separately and then piecing the play together without the need for much rehearsal. Sadly, it turns out the six cast members have all learned different plays! The adorable Judith (Natasha Agarwal) suggests a solution (once she’s hilariously extricated herself from an uncooperative waterproof suit): go ahead anyway, and if in doubt, throw in a bit of Pericles. The company agrees to do this, because once the audience have had a few pints they’ll never notice the difference anyway, will they?

That audience at the Bridewell Theatre was conspicuously small on the night. I felt for the valiant ensemble as they tried to build a comic atmosphere with little opportunity for audience response, and I have to suspect the show would have had more effect at a pub venue in the Edinburgh Fringe. But try they did, throwing themselves into the chaotic nonsense with audacious commitment, and their enjoyment of the play shone through.

This is a superb script from writer David Spicer, unapologetically silly and very much in the spirit of classic comedy such as The Morecambe & Wise Show. The poetic, lyrical words of the world’s finest playwright are cleverly grafted together in a seemingly haphazard but actually impressively clever manner that is laugh out loud hilarious. He makes great use of Northern vernacular and all too familiar personality-types to comically contrast the heights to which his characters reach, and the depths to which their performance plummets.

From the pompous Eben (Steven Arnold) and his grandiose Hamlet, to the ditsy yet remarkably supple Rebecca (Vikki Earle) with her passionate #MeToo take on Taming of the Shrew, the cast work brilliantly as an ensemble. At times it’s hard to tell which of the nonsense is scripted and what is them building on the confusion. Down to earth Terri (Kathryn Chambers) creates a hilarious, grumpy counterpart to the OTT hamminess of the thespians, and her use of a vape to generate spooky smoke is inspired. Connor Simkins as Jason offers an outstanding physical performance, his rubbery arm movements sawing the air in a manner sure to distress the Dane himself, whilst Stuart-Hudson escalates his outlandish comedy to almost Monty Python-esque ridiculousness. Kudos to Director Shaun Chambers for the company’s final death scene, which is so ludicrously funny it must be seen to be believed.

Don’t think you shouldn’t see this show because you don’t do Shakespeare, because the characters barely do either. Take it for what it is – a light-hearted, physical and farcical nod at am-dram but underscored with some clever textual work that gives it layers. Take your mates, have a pint or three and lots of laughs: it’s a great night out!

Doing Shakespeare plays at the Bridewell Theatre until 13 November. Further information and booking via the below link.

Previous: Preview: Our Last First
Next: Interview: Belinda McGuirk invites us all to EverAfter