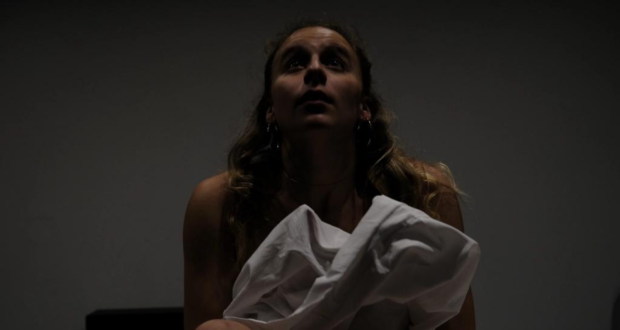 A beautiful, funny yet heart-breaking exploration of the effects of sexual violence, alongside three individual works of women with something important to say.

Brave Face and Friends at the London Hospital Tavern is a two-part cabaret style performance aiming to highlight the stories of women and non-binary performers. Alongside three different supporting acts each night, HooHah House Productions present their play, Brave Face, written and performed by Everleigh Brenner.

The first half of the evening sees three unique performers; tonight we’re treated to Abigail Jacqueline Jones, Emma O’Dwyer and Jennifer Rose Welch’s Cheeky Poetry. Trans writer and performer Jones’s work featured a dramatic reading of her work ‘Show Me Your Genitals, Baby’, a satirical, theatrical story highlighting the needlessness of applying gender onto babies and the implications that this has on society. Jones did a wonderful job of highlighting the issues in a simple manor, almost reminiscent of a child’s bedtime story, yet aimed at an adult audience. Following Jones was O’Dwyer with a sketch on the perils of online dating, mischievous men, and female solidarity. She’s absolutely convincing and charismatic, highlighting a human experience that is so common in a modern setting. Finally for the first half, Welch’s Cheeky Poetry gave us an acute focus on the female experience through their use of rhyming couplets, expressive dance and music. They created a real sense of fun throughout the audience while still addressing important topics.

After the interval, we’re treated to the centrepiece of the evening, the absolute triumph of Brave Face. The play explores the aftermath of sexual assault, how it effects the lives and relationships of its victims, and never really leaves a person. The use of projection was provoking, acting as a perfect aid to the story being told. The simplistic setting of a wooden structure on stage worked well, allwing for rapid scene changes, whilst music accompanied the scenes so perfectly to fully immerse us into the characters’ world. But undoubtably, the most notable element of it all was the compelling, haunting and hilarious performance offered by Brenner. Her acting was sublime, transporting those around her fully into her life, making us feel one with her character, Em.

The whole evening delivered a beautiful experience, one that put forward the work of women who wholeheartedly deserve to receive the spotlight. Each demonstrated hugely important stories that will surely provoke much thought and feeling in those fortunate enough to have been present.

Brave Face and Friends is next playing at Drayton Arm’s Theatre 8 – 10 February. Further information via the below link.

Previous: Review: Exile, Lion and Unicorn Theatre
Next: Podcast: Raising a glass to A Pissedmas Carol

Lucy is currently a London-based university student studying drama. Since a very young age, she has been an avid theatregoer of both plays and musicals alike; She is very well practised in picking apart and delving deeper into what is being presented. She tells us she cannot wait to share her thoughts and feelings on what the stage has to offer!