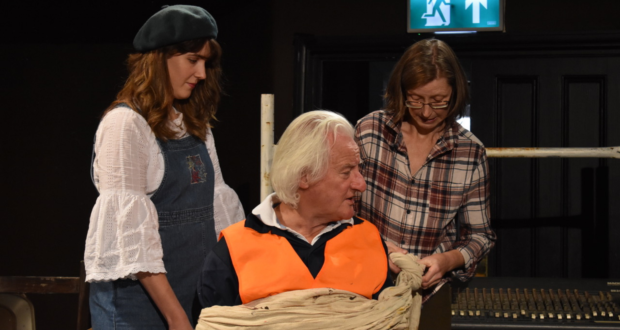 Review: Accidental Birth of an Anarchist, The Space

Review: Accidental Birth of an Anarchist, The Space

Good Cop, Bad Cop 26: A Climate Festival For the first fortnight of November 2021 the climate change conference, COP26, is taking place in Glasgow. Dozens of world leaders are trapped in a room trying to avert a disaster. 345 miles away at The Space on the Isle of Dogs, Accidental Birth of an Anarchist presents another ‘trapped in a room trying to avert disaster’ story. Lia (Pip O’Neill) is an engineer and Alice (Aurea Williamson) is some sort of civil servant. Both are undercover climate activists who find their way into an important control room on an offshore&hellip;

A well performed climate drama that works well within the limitations of the genre.

Lia (Pip O’Neill) is an engineer and Alice (Aurea Williamson) is some sort of civil servant. Both are undercover climate activists who find their way into an important control room on an offshore oil rig in the North Sea. They intend to glue themselves to the rig and hang a banner in protest, but when they’re caught by the Captain (Michael Jayes) they end up having to take him hostage, and their plan begins to unravel.

The ‘trapped in a room with a hostage’ format is a predictable vehicle for what this show inevitably is; a dialectic between climate crisis prevention activists and ‘big oil’. It’s a conceit that allows lots of time for talking about facts and figures and requires – or perhaps even enforces – little action. Spoiler alert: towards the end of the play the rig encounters a problem and they must work together to avoid a fatal explosion, which brings the activists and the captain together. Neither want to see a temperature increase: one over the course of the coming years, the other immediately, if the rig blows.

There are some limitations to the writing. We don’t really get a sense of who the characters behind the climate activists are, other than that one’s a mother and the other quite likes Formula 1. The Captain, played with charm by Jayes, is treated with sympathy as a man trapped between the world of ‘big oil’ and his conscience. It would be easy to blunt force a metaphor onto this character but the honesty in writer Luke Ofield’s play is that he sees the human structures that excuse, rationalise and perpetuate the climate crisis.

Williamson and O’Neill play well together as headstrong and hapless activists, with a courage in their conviction as performers, vital to portraying two committed radicals. The performances are fun from all, especially Gabriel Thompson as the Captain’s sidekick Ben, who appears only as a self-interested voice on a walkie-talkie. Jayes takes the character development afforded to the Captain and plays it with sensitive restraint and just the right cantankerousness.

Minor criticisms aside, this is a well-performed and entertaining piece of work that makes the best of the limitations of the climate activism theme that it explores. It certainly provides for an entertaining evening at a very significant moment in time, as the world awaits the results of COP26.

Accidental Birth of an Anarchist is playing as part of the Good Cop Bad Cop 26: A Climiate Festival. Both run until 12 November. Further information and booking for this show, plus details of other events that form the festival can be found via the below link.