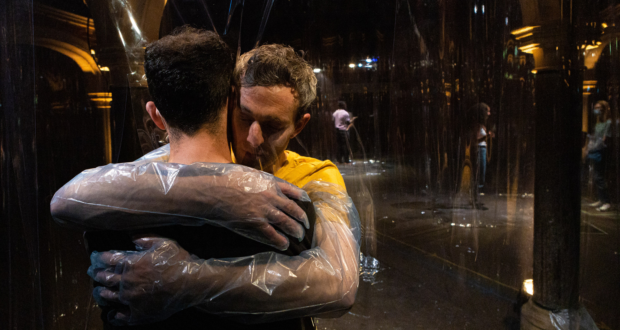 Last summer Everything Theatre was privileged to review one of the most extraordinary, impactful pieces of drama that came out of the pandemic: Dante or Die’s Skin Hunger, which we gave the full five stars.  Prompted by the incidence in Brazilian care homes of plastic ‘hug tunnels’ that enabled vulnerable people to hug their loved ones, safe from contamination by Covid 19, this performance explored the power of touch in our lives, at a time when many were deprived of it.

The company have now launched a film and book which discuss this amazing experience, and the responses emerging from it.  Now out from behind the plastic, they are screening the film in prisons, care homes and arts centres across the country, and also facilitating bespoke theatre workshops about the importance of touch. We spoke with Terry O’Donovan, Co‑Artistic Director of Dante or Die, to discuss the new life the show is having, and its ongoing effects.

So Terry, you and I had a little hug last year through the plastic at the Stone Nest, and it was probably the most exhilarating dramatic moment of the year for me. I still get a bit excited when I think about it now, and how special the experience made me feel! Did you realise at the time just how profoundly important the power of touch, and deprivation of it, was?

Oh, wow, it’s so amazing to hear that the experience stayed with you so much. The reason we made the show was exactly that. My co-creator Daphna [Attias] and our producer Sophie [Ignatieff] first met to discuss the idea outdoors, with my daughter who was just over a year old. They desperately wanted to give her a cuddle but we couldn’t take that risk. The fact that we were all missing touch was what spurred us on to make the show.

How did the live performance feel for you, as artists?  What reactions did you get from your audiences?

The live performance was exhilarating and exhausting, joyful and devastating. The incredible thing about it was that each audience member brought themselves to the interactions, so that meant that every performance was emotionally charged in a different way. I really didn’t know what the audience member was going to feel as I begged them for forgiveness. Some people were very angry with my character – one woman said to me “In my experience men like you don’t change”. Another woman walked away from me after three minutes saying “I don’t need to listen to this.” Then she came back and we chatted about her ex-boyfriend who was just like the character I was playing – the script went out the window. A man broke down in tears and I really, really held him. I feel incredibly fortunate to have experienced those very unique and intimate moments with people.

You have created a fabulously evocative film about Skin Hunger with award-winning filmmaker Pinny Grylls, which focusses on several individual audience members and their responses to the event. How did you choose who to talk to?

We wanted people who had a specific experience of touch in their lives. We had come across Professor Francis McGlone’s work when researching, and he kindly met us on Zoom as we were developing the scripts and design. We thought it would be interesting to see how he responded to the show with his wealth of experience. Over the last few years we’ve been developing another production that looks at same-sex relationships in prisons, so the word lockdown had been on our minds in that context. We asked Morgan to share his experience of prison lockdown alongside the idea of a Covid-lockdown – so many people in prison have touch and intimacy taken away from them, and we’re all now aware of how integral it is to wellbeing. Helen, who is a care worker, came to us through her son, the actor who was originally going to perform Sonia Hughes’ monologue about her caring for her Dad who had Alzheimer’s. It felt important to represent someone who worked within a care setting; care homes were so affected by the pandemic. And of course the image of the Brazilian care homes was our original inspiration.

Tell me a bit about touring the film: why have you chosen these particular venues? Did you recognise something connecting them at the time of the performance in the summer?

Absolutely. We felt that the there was an opportunity to start a conversation about how lack of touch has affected us all, through screening the film at care homes and with people who’ve experienced criminal justice, because Helen and Morgan are so key to the narrative. As you can see in the film, Helen’s response to the production was very emotional. And the screenings and workshops that we’ve done in care homes have been similarly received. It’s been very moving to see people’s experiences reflected.

You interact with such a variety of audiences on the tour, and of course through home-streaming of the film. Do they have very different responses to the work, or are there common threads wherever you go?

There are really different responses but the overwhelming one is recalling the strangeness of lockdown, and how that has affected us all in ways we don’t even comprehend. One of the most interesting tour locations was in Mansfield with a group of neurodiverse adults, where they spoke a lot about the complexities of touch for people with different needs. Conversations have been sparked about consent, and identity, what it means to be human. I ran a workshop in a secondary school in Salford where the 15 year olds wrote extremely tender pieces of prose about their own experiences of touch as a positive experience. It’s not something that we get to talk about very often, and yet it has such a profound effect on us.

The project has obviously evolved into different media – a show, a book and a film, but now you’re taking it to new audiences, who are using it to create work through their own stories. Can you tell us a bit about that?

We were due to produce the live production in November 2020. The day before we were going to build the installation, the second lockdown was announced and we had to postpone the show indefinitely. We then had some time to think about how the project could reach new people and in different ways, because only 216 people would be able to see the live production. We’d begun a conversation with filmmaker Pinny Grylls about documenting the project, so took some time to riff on how this could be developed into a film that was more about touch and audience than about the production. Similarly, George at Salamander St publishing met with us on Zoom and we talked about how the book could be an interesting reflection on creating this very particular production. So the delay spurred on this evolution!

The workshops have resulted in participants creating their own stories, devised scenes, movement sequences inspired by touch. It’s been really wonderful to see how people have been creatively exploring their own experiences as a result of the film and workshops.

What have you discovered by revisiting that peculiar moment of enforced isolation in the pandemic now that we are some distance from it?  What has the project manifested about the value of touch, and how society perceives it post-lockdown?

An audience member of the film recently commented: “Even when touch became possible again I still felt the disconnect that made reconnecting beginning again even at the level of conversation so difficult. Watching the film made my inner loss tangible.” I think a lot of people have leapt back into ‘normal life’ but there is a lot of unexplored trauma that I think we’ll be unpacking for years.

This is an incredibly moving film that really gives insight into what effects touch and the lack of it can have. I suppose it’s important to remember that many vulnerable people are still shielding from Covid today.  How does it feel knowing that you can show them understanding and offer opportunities for alternative forms of contact and interaction through the arts, when they might otherwise remain distanced and forgotten?

It feels very special, and exciting that we can connect with those people who can’t get out to live performance at the moment. There seems to be a drive towards not mentioning the pandemic and carrying on as before. I get that – people don’t want to think about it because it was so all-consuming and such a hard time. But theatre, film, music, art that explores the pandemic will help us all to move forward.

Will it be possible to see the original production in full online, and what is the future for Skin Hunger on Film?

Yes! The full production has also been edited brilliantly by Pinny Grylls and is available on our website on pay-what-you-decide. We’ve never done that before so we’re excited to see how many people watch it and get the sense of what it was like to experience it.

The film has just been featured on international digital magazine Aeon. This week it’s being shown at Lighthouse Poole’s cinema as part of their trailers. And we’re submitting it to film festivals, so we’ll see what happens with that.

Terry, it’s been so lovely chatting with you. We wish you well with this exciting project, and I really hope we get to hug again in the future!