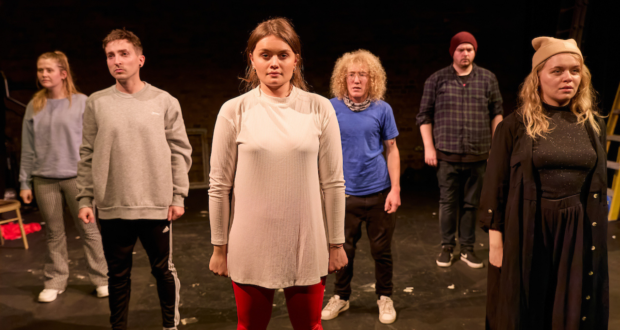 Chck our our podcast interview with the writer, Andrew Muir, and actor, Georgia Bates here

Chck our our podcast interview with the writer, Andrew Muir, and actor, Georgia Bates here As someone who’s always loved and been involved in the arts, I was absolutely fuming at the government backed advertising campaign that emerged in 2020 suggesting that those in the arts should rethink their career. Give up that dream of ballet and go into cyber, ‘Rethink. Reskill. Reboot’. Insulting not just to the ballerina but also to any cyber experts, which I imagine also takes a lot of specialist skill to master.&nbsp;It is from this poster that Rethink takes its inspiration. Six new graduates&hellip;

A fantastic piece of theatre - flawless writing giving a platform to incredible talent that deserves to be seen.

As someone who’s always loved and been involved in the arts, I was absolutely fuming at the government backed advertising campaign that emerged in 2020 suggesting that those in the arts should rethink their career. Give up that dream of ballet and go into cyber, ‘Rethink. Reskill. Reboot’. Insulting not just to the ballerina but also to any cyber experts, which I imagine also takes a lot of specialist skill to master. It is from this poster that Rethink takes its inspiration. Six new graduates are facing a world that is not only having to navigate a pandemic and the disadvantages of living outside of London with its limited opportunities for actors, but also a government dismissive of the arts as though it’s just a disposal part of our lives.

As should be abundantly obvious, this show struck a real chord. But it’s not just the subject matter that made it so striking. The way the plot is handled is masterful. Our graduates are sent back to their old drama school on the south coast of England for retraining. Just to add salt to the wound, the school that holds so many special memories is now derelict and due for demolition the following day. And what appears to be the human incarnation of the ill-advised ad is there to convince our young actors to pursue a new career path. Paired with flashbacks to the student’s time at the drama school, it makes for an impactful narrative. It brought back a lot of memories of my own time as a music student, my version of pretending to be a tree in a room full of strangers, and the hopes and dreams of an arts graduate.

One of the beauties of fringe theatre is that it showcases talent in its purest form. Rethink is performed in The Union Theatre‘s bare studio, no set and minimal props. It gives the narrative and the skills of the cast the chance to shine through. There isn’t a weak link and it’s striking to note that they are playing versions of themselves. This is a true story, none of them deserve to be in the positions that they have found themselves. And while the pandemic has meant many actors have found themselves in similar circumstances – graduating into this crisis must be especially heart-breaking.

Some stand out moments include Hugo Lucas Rowe’s monologue, a beautiful piece of writing about his disability and the attitude of others, performed with such raw emotion that it moved me to tears. And when Jack Dunford talks about the impact of furlough and the desperation of the pandemic on his mental health, it is gut wrenching. Sam Jenkinson is a comic character at first, constantly questioning whether his hero De Niro ever had to do such trivial exercises, but his performance becomes equally heart-breaking. Georgina Pacifico and Georgia Bates also bring a brilliant mix of humour and emotion to the stage, while Gabrielle Holloway’s vocal performance is a spine-tingling moment. They are a talented bunch. And their talent deserves to be seen.

The final moments of the play showcase the will and motivation of these skilled young people when faced with the government-endorsed trainer, played with wit by Vincenzo Viola – who may be harbouring failed dreams of his own. I couldn’t help but compare my own experiences to those of these young stars. I graduated in 2013, when a pandemic wasn’t imaginable. But it was still tough. There’s no happy ending to the play. Because there’s no immediate solution to the issue. The arts are constantly dismissed, underfunded, or forgotten. But there is something tangibly powerful about being in a room full of people who believe that they are something worth fighting for.

Rethink has completed its current run at The Union Theatre. It will play at Poole’s Lighthouse (4 February), Manchester and Leicester in 2022, check Ardent Theatre’s website for further information on confirmed dates.