This weekend, in Glasgow, world leaders will assemble at a conference about climate change. I don’t know about you, but the slow pace of politics and my general feeling of distrust of some politicians doesn’t leave me hopeful for effective calls-to-action. (This is your opportunity to prove me wrong, Mr Johnson.) Thank goodness then that some 400 miles away I was lucky enough to sit in The Albany, Deptford&nbsp;, to watch SOUNDS LiKE CHAOS&nbsp;share their thoughts on the climate crisis instead, in their performance of Dirt. The self-proclaimed ‘radical, youth art collective’&nbsp;are Associate Artists at The Albany, which feels&hellip;

A weaving together of stories of family and cultural legacy with a passionate call to action on the climate crisis; practical oversights don’t put off this energetic young cast.

This weekend, in Glasgow, world leaders will assemble at a conference about climate change. I don’t know about you, but the slow pace of politics and my general feeling of distrust of some politicians doesn’t leave me hopeful for effective calls-to-action. (This is your opportunity to prove me wrong, Mr Johnson.) Thank goodness then that some 400 miles away I was lucky enough to sit in The Albany, Deptford , to watch SOUNDS LiKE CHAOS share their thoughts on the climate crisis instead, in their performance of Dirt.

The self-proclaimed ‘radical, youth art collective’ are Associate Artists at The Albany, which feels a vibrant artistic hub in cool Southeast London. The bar is buzzing with excitement – so much so that quite a few of us have to be urged into the auditorium. A seamless experience, though, because the troupe of young performers (all of SOUNDS LiKE CHAOS are aged 12-25) have a party waiting for us thanks to their DJ, Winston. They try to interact with the audience pre-show, wanting questions from us, but the risk you always take is that people aren’t so keen to be involved so early on. Sorry, guys.

The show starts, and I’m quickly invested in the stories they tell. Passionate narratives are woven, starting with their journeys to the theatre (sadly no-one was on the 53 from Woolwich with me), through to their family and cultural inheritance. It is clear how empowering it is to tell these stories – the sense of legacy really carries through, and the love is palpable. Love for their families, for their histories, and for each other in being able to share this experience; of being proud of how they became who they are.

Some technical elements hinder what are admirable performances – for example the jarring differences between cast with a mic against others without when talking to each other, as well as elements of the audio being too loud for the voices over it. I’m espcieally impressed at the acapella vocal work, which is sensitive and evocative. And the performance truly comes to life when the cast are supported by recorded music; their energy is infectious. The programme doesn’t indicate who played which characters, so it’s impossible to name them, but I feel the Greek chorus-like quartet, who keep the thread of the performance going from on high, deserve extra praise.

A second thread of the performance eventually comes through, highlighting their main concern: an exploration of the climate emergency from their youthful perspective. It’s a little hard to take in at first because the rather clinical discussions are a huge contrast to the personal stories told around them, and the slow scene-by-scene build up takes a while to click. But by the end I’m sold; they aren’t afraid to tell it how it is – the Thames Barrier will break, and where we are sat will end up underwater. Briefly they connect the two parts of the play together, it’s emotionally charged, and leaves us in the right place for our call to action to save the future of our world. To save their future. This hard hit is short lived, which leaves me wanting so much more of what they gave, but it makes the moment difficult to forget.

Thank you, SOUNDS LiKE CHAOS for sharing what’s important to you. Despite some difficulties your enthusiasm, passion and vitality is really evident. I look forward to seeing what you, both as a collective and as individual performers, come up with next. Make yourselves heard and it will be you that UN ask to go to their conferences before long.

Dirt plays at The ALbany until 30 October (all remaining performances are currently sold out). Further information can be found via the below link. 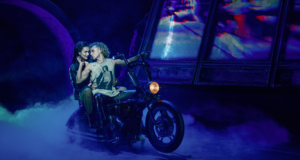