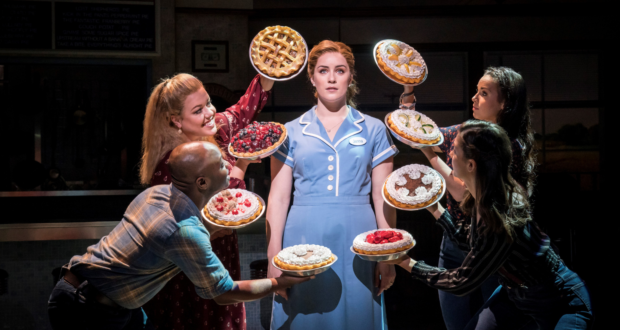 There were a few small perks to lockdown online theatre – home comforts, no queue for the toilets, unlimited tea. And tonight, in the uncomfortably toasty New Wimbledon Theatre, with a family repeatedly passing around very noisy sweet packets, a small part of me wished I was still on my sofa. But a bigger part of me was thrilled to be at Waitress. I was due to see the show a week after that fateful day last March when our beloved theatres closed their doors, so you can imagine my delight to finally be at the show tonight. Waitress&hellip;

After a long wait to see this show, it does not disappoint. With a huge heart and incredible talent, Waitress is a sugary treat from start to finish.

There were a few small perks to lockdown online theatre – home comforts, no queue for the toilets, unlimited tea. And tonight, in the uncomfortably toasty New Wimbledon Theatre, with a family repeatedly passing around very noisy sweet packets, a small part of me wished I was still on my sofa. But a bigger part of me was thrilled to be at Waitress. I was due to see the show a week after that fateful day last March when our beloved theatres closed their doors, so you can imagine my delight to finally be at the show tonight.

Waitress tells the story of, no surprises here, a waitress, Jenna (Lucie Jones) along with her two colleagues, Becky (Sandra Marvin) and Dawn (Evelyn Hoskins). Working in this pie-filled diner, Jenna discovers at the start of the show that she’s pregnant. What follows is nine months of highs and lows for these three wonderful women, as the plot delicately weaves serious issues around lighter comedic moments. One minute it’s an incredibly tense and uncomfortable scene with Jenna’s abusive husband, Earl (Tamlyn Henderson) telling her she can’t love her baby more than him, and the next we’re watching the hilarious Ogie (George Crawford) trying to win Dawn’s heart. The show is tender, funny, yet heart-breaking – the genius of Jessie Nelson’s book perfectly complimenting Sara Bareilles’ beautiful music and lyrics.

The last time I saw Matt Willis, here playing Dr. Pomatter, on stage he was sporting a pair of low-slung jeans, telling Wembley arena “that’s what I go to school for”. Yes, teenage me was a huge Busted fan. And back in those golden days of pop rock my heart belonged to Charlie. Well, tonight my allegiance moved to Matt. From the moment he walks on stage he encapsulates the role, he’s funny and awkward (as the role requires) but has a voice that is tender and warm. This is by no means his first foray into musical theatre, but he’s won a whole legion of new fans tonight.

But the star of the show is undoubtedly Lucie Jones; her voice is outstanding. I don’t think I’ve ever witnessed a standing ovation halfway through a show, but as she came to the end of the astonishing ‘She Used to Be Mine’ the auditorium erupted. The audience were so invested in the show; perhaps it being the Reopening Gala Performance added an extra layer of adrenaline to the room, helped by the free tea towels we received as well, but with that voice I imagine the reaction isn’t an anomaly.

The whole show is slick, considered, and flawless. Lorin Latarro’s choreography is wonderful, with the considered and controlled movements of the ensemble (slight shoulder shrugs, subtle dance movements) perfectly framing the unfolding story. These considered movements brought the entire world of the show to life. Scene changes were so smooth that you barely noticed that the set had changed around the cast.

I’m at risk of gushing in this review, perhaps I was slightly biased given my excitement at finally seeing the show after 18 months of waiting, but it really is a fantastic musical. It will make you laugh, cry and want to hug the person next to you come the end. The music is stunning, reminding me of the irresistible sounds of Once or Come from Away but with a touch of American country. If you need me, I’ll be listening to the soundtrack on repeat. And trying to cool down, it really was hot enough to bake a pie in the auditorium.

Waitress plays New Wimbledon Theatre until 11 September, before touring the UK extensively throughout 2021 and 2022. You can find the full list of dates via the below link.