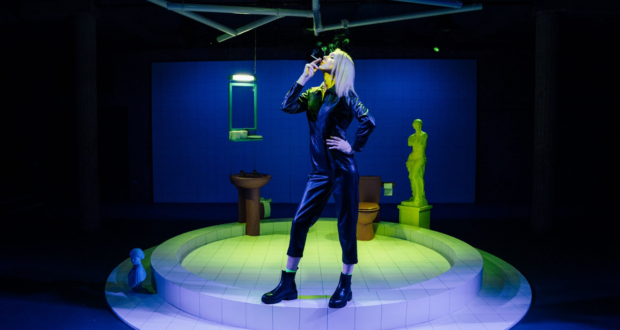 One question I’m constantly pondering is just how much theatre has the power to affect change? It’s easy to live in our theatre bubble, endlessly amazed at the powerful messages delivered. But how far does that bubble extend into the real world? I find myself asking this question again as I watch Travis Alabanza's Overflow in the always-glorious surrounds of the Bush Theatre, a venue that surely bridges that gap between fringe and West End. Overflow really is the timeliest of tales, as Rosie (Reece Lyons) takes us through her history with women’s toilets. And why is this important?&hellip;

A timely play about the use of public toilets, from the viewpoint of a trans woman. Reece Lyons serves up a stellar display, as she takes us through her history with the one room we usually avoid discussing.

One question I’m constantly pondering is just how much theatre has the power to affect change? It’s easy to live in our theatre bubble, endlessly amazed at the powerful messages delivered. But how far does that bubble extend into the real world?

I find myself asking this question again as I watch Travis Alabanza‘s Overflow in the always-glorious surrounds of the Bush Theatre, a venue that surely bridges that gap between fringe and West End. Overflow really is the timeliest of tales, as Rosie (Reece Lyons) takes us through her history with women’s toilets. And why is this important? Because Rosie is transgender, so caught in the ongoing debate about whether trans women should be allowed to use ‘the ladies room’. It seems probable that most of the audience here are already decided on this question: so much so it’s easy to wonder why there is still such argument around it. But for Rosie it’s not so straightforward, as Overflow makes clear.

From the opening moments, as a light picks out Rosie posing against the white tiled wall, she is absolute attitude, confidence and sass, poured into her figure-hugging black jumpsuit. She runs with purpose across the stage into the ladies toilet (absolutely stunningly designed by Max Johns), launching into a monologue about what’s the best piss (if you’re wondering, apparently it’s the pre-emptive one). Lyons’ delivery is as sharp as that outfit, drawing every possible laugh from Alabanza’s crisp writing. But this commentary on the inanest of subjects is not all it seems. It has purpose; it has history. As she is constantly interrupted by loud banging from outside, you begin to realise that Rosie is not as confident or currently in control as first appeared. Because she has locked herself inside that toilet to escape the men who have chased her there. Why? Because she is different? Because she is trans? Or maybe simply because some people are just bigots and narrow-minded, strangely stoked up by something that really won’t have any effect on their own lives?

Rosie’s monologue moves from best piss to her history with toilets; from being accused at school of flooding the girls’ toilets; her first time using the ladies in a club; the supportive network of females she found within those hallowed walls; and of course, those times she has been made to feel unwelcome in one and asked/ ordered to use the “other one”.

Overflow is damn powerful. The cheers Lyons’ elicits from the audience throughout suggest many watching can relate to Rosie in the most personal of ways. But even without that personal experience, it’s hard to take your eyes from her as she goes through the emotions and memories that toilets hold, raging against the injustice of it, just because of her identity. It’s not merely Lyons’ performance that makes this show. There is an incredible insight in Alabanza’s writing – unsurprisingly given it’s clearly based on personal experiences. Add in that impressive set, Francis Botu’s sound and Jess Bernberg’s lighting, and it’s a combination that director Debbie Hannan brings together skilfully to make this show sparkle.

And so I return to my original thought as to whether theatre can affect change? Surely yes, because shows such as Overflow can help shape the conversation, help remove fears too many people seem to hold about such an emotive subject. Overflow is not just funny and emotional, with a performance from Lyons’ that richly deserved the standing ovation come the end. It is another wonderful moment where theatre tackles head-on issues currently in the midst of public debate.

Overflow plays at The Bush Theatre until 9 October. Further information and booking via the below link.