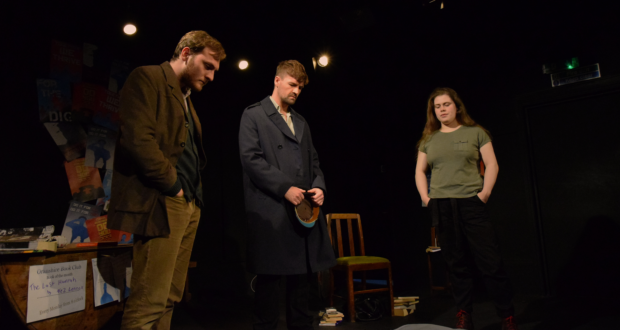 I’m a sucker for a well-written play that can be debated for hours afterwards, so Gutter Street's Feathers, with its talk of propaganda and mysterious enemies, looked just the ticket. And whilst it may be set in a very different, dystopian world to our own, the parallels of how we can blindly believe what we are told are surely more than just coincidence. Feathers’ dystopian world finds its citizens being asked to join the latest fight against ‘the great threat’. But siblings Kaleb and Cecily (Nathan Chatelier and Charlotte Keith) don’t want to fight for their country, so the&hellip;

If you like your plays to leave you with a whole load of unanswered questions for debating in the pub afterwards then Feathers is surely one for you.

I’m a sucker for a well-written play that can be debated for hours afterwards, so Gutter Street‘s Feathers, with its talk of propaganda and mysterious enemies, looked just the ticket. And whilst it may be set in a very different, dystopian world to our own, the parallels of how we can blindly believe what we are told are surely more than just coincidence.

Feathers’ dystopian world finds its citizens being asked to join the latest fight against ‘the great threat’. But siblings Kaleb and Cecily (Nathan Chatelier and Charlotte Keith) don’t want to fight for their country, so the night before they are due to be drafted we find them about to flee to the North and the mythical sanctuary they have heard about. It’s all going to plan until Draft Officer Haines (Matt Howdon) shows up with contracts needing to be signed. While Cecily makes her escape, Kaleb finds himself stuck with Haines, who now won’t leave in case Kaleb is also a flight risk. As the night draws on the pair trade secrets and debate just why they should blindly give up everything at the word of a faceless government.

All three actors put on convincing performances, although it feels a shame that Keith leaves proceedings so early on; her frank and honest attitude works well against Kaleb’s more thoughtful and nervous approach, adding humour to the heavy threat hanging over them. Staging is kept simple yet is thoughtful. Real effort has gone into propaganda poster designs that are liberally plastered over the walls. One stating ‘Birds of a Feather Fall Together’ helps explain the play title, as we discover ‘Feathers’ are what deserters are being labelled. It certainly helps you feel you are part of this world where Big Brother really could be watching; yes, 1984 vibes loom large here.

Dystopian futures work best when things are tantalisingly vague, and Feathers does that superbly well. Little snippets are dropped into conversation, yet nothing is ever really explained. The Dig is left dangling in front of us with no clue to what it really is except we’re aware they are excavating a big hole. Just who the enemy might be is equally as vague, although it soon becomes clear they aren’t exactly sure about who or what it is either. They are only certain that they must stand up together against it to protect their country and one another.

By not making clear what the threat is or providing any real clues as to what is true or not you are bound to come down on the side of the plucky underdogs; the ones questioning everything; the ones fighting the big faceless machine who ‘know’ the truth. Except, well, Howdon’s draft officer certainly helps balance the argument, offering his own reasoning why they must all fight to protect one another and why Feathers are selfish cowards. It’s in this juxtaposition that the real debate is to be had later in the wonderful pub that hosts Lion and Unicorn Theatre: how can we really be sure that they know best?

As the night draws to a close, I’m left rooting for Kaleb and Cecily. But travelling home I’m still turning it over in my head. Because is it really that crystal clear? Do those who claim to have uncovered hidden secrets really always know best? It’s a rather perfect analogy for today’s Covid deniers, because aren’t they the same, claiming to be standing up to the state-peddled propaganda? Aren’t they the ones who claim to know the ‘real truth’, as they tell us the pandemic and vaccine are just a cover up? Just transpose Piers Cobain and David Icke into this story and you would see it in a whole different light!

Feathers is playing at Lion and Unicorn Theatre until 25 September. Further information and booking via the below link.