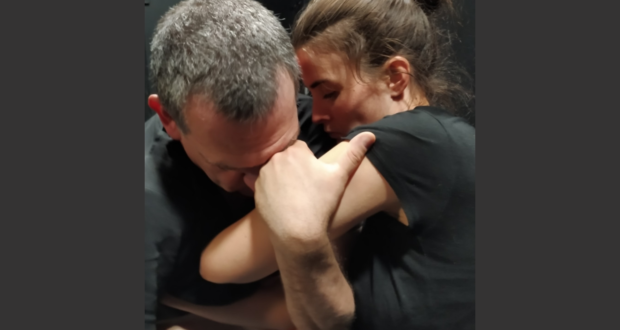 Camden Fringe 2021 It’s difficult to decide if plays should absolutely avoid mention of the past 18 months or whether plots involving lockdown are just inevitable given we’ve all lived through them. The one certainty is that if you are going to pitch a story with any hint of Covid-19, you’re really going to need to find a novel approach to avoid theatregoers rolling their eyes to the skies before completely ignoring you. Thankfully Gideon Benari's The Corona-tion of Celia attempts something different, even if that title, however clever it may have seemed on the page, sends an instant&hellip;

A visually enjoyable play in its gracefulness, but which currently feels as if it has missed a dance step or two in its writing.

It’s difficult to decide if plays should absolutely avoid mention of the past 18 months or whether plots involving lockdown are just inevitable given we’ve all lived through them. The one certainty is that if you are going to pitch a story with any hint of Covid-19, you’re really going to need to find a novel approach to avoid theatregoers rolling their eyes to the skies before completely ignoring you.

Thankfully Gideon Benari‘s The Corona-tion of Celia attempts something different, even if that title, however clever it may have seemed on the page, sends an instant chill through me as I fear what is coming at my first lockdown-inspired play.

Jim (played by writer Benari) meets Celia (Pauline Superville) at a dance class. From that first moment when she glides effortlessly across the stage and on to her pedestal, it’s clear she is elegant, graceful, and undoubtedly out of Jim’s league! But he is infatuated, ecstatic to get one clumsy dance with her. He begins to fantasise about what might be, playing out scenarios in his head about their next meeting; how she might choose him over all the other suitors fighting to be her partner, not just for the next dance, but in love too. But his fantasies are stopped dead in their tracks as the country goes into lockdown. Instead, he desperately reaches out through the digital world to find her, hoping beyond hope that she will remember him from that one dance that he cannot forget.

Where The Corona-tion of Celia works is in how it tackles the fantasy of the perfect relationship in a way not often seen on the stage. This isn’t a typical love story where the beautiful girl falls madly in love with the bumbling fool. Instead, while showing an infatuation that, deep down, we realise is only ever going to be one-way it also allows the daydreaming of what might be to go on, as we anticipate the heartbreak that is surely to come.

There is also much to love in the physicality of this show. The pair move gracefully around each other, that imagined romance becoming a dance in front of our eyes. Even as Jim sits at his keyboard writing imaginary words that Celia will say to him, there is a gracefulness in their shared movements, making this a visually striking experience.

However, even with that glorious physicality, there is something that stops this play placing the right foot forward. The writing feels much less graceful than the movement. It’s probably intentional that reality and fantasy blur into each other, but the effect is that the story leaps around as we struggle to decipher which is which. There is also way too much repetition as Jim goes over and over the same thoughts of Celia, with little progression in any actual story. Lockdown arrives in the story so late you can easily be mistaken in thinking Jim and Celia have danced together in reality on many an occasion.

Perhaps this play has hit the stage too early; too eager to be first on the dancefloor ahead of all those other lockdown plays? It feels as though it really needs further rewrites to get the story as smoothly choreographed as the movement. The concept is sound, the whole dance of love it portrays is fresh and engaging, but it isn’t quite enough to make this a play that could stand out under that glitterball just yet.

The Corona-tion of Celia has completed its current run. You can find out more information and future dates on their website via the below link.

Previous: Review: A Thousand Sons, Etcetera theatre
Next: Review: Once Upon A Time In Nazi Occupied Tunisia, Almeida Theatre