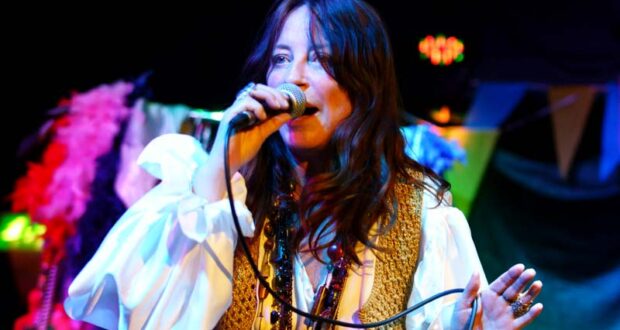 A powerful performance from Collette Cooper as Janis Joplin will delight fans - but those expecting drama will be disappointed.

Subtitled Tomorrow May Be My Last, this is a homage to the 1960s rock legend Janis Joplin, whose death at the age of just 27 curtailed her short and troubled life. Joplin is vividly brought to life by the acclaimed singer/songwriter Collette Cooper, who throws her body and soul into the part. Backed by a tight threesome of lead guitar (Jack Parry), bass (Daniel Malek) and drums (Jan Simson), she manages to make the small Union Theatre feel like a vast stadium: she’s clearly playing to a much bigger crowd than could squeeze into this space. The music is brash and ballsy and faithful to the original, and it’s as close as any of us are going to get to a real Janis Joplin concert.

The songs punctuate Joplin’s confessional reminiscence of the journey that took her to international fame. She tells of her childhood in Port Arthur, Texas, where she was mercilessly teased by her schoolmates for being “just your fat, ugly Janis Joplin who liked to hang around with black folk”. She was an unpopular adolescent, with no boyfriends to take her to the prom and a mother who questioned why she couldn’t be “ladylike, like the other kids”.

After dealing with Janis’s childhood, Collette Cooper – who also wrote, co-produced and co-directed the show – runs out of things to say in the monologues between the songs. There’s only so many times you can tell the audience to follow their dreams, and that she’d rather “burn out than fizzle away”; the result is a repetitive, unenlightening stream of hippie jargon and platitude (“I don’t need drugs, I am drugs, man”). There are also few insights into Joplin’s character, and little reflection among the string of Janis quotes and biography.

The problem with this play is the absence of drama. Yes, there are a couple of dramatic moments – members of the audience being singled out to be sent to the back by police, a brief nightmare sequence – but apart from Cooper’s engaging performance, there are no highs or lows, no light and shade in the monologues. Even Joplin’s sudden, unforeseen death, which could have been the big dramatic denouement, takes place off stage, announced only by contemporary radio news reports.

Three additional actors – Star Eddy, Bree Smith and Damian Escayg – play hippie chicks, cops, and black-clad pseudo-Klansmen with faces made of sacking. They interact with the audience, but not with Janis, a decision which deprives the play of the opportunity for confrontation. If this trio had played Janis’s schoolmates, mother or boyfriends, it could have breathed some much-needed dramatic tension into the monologues.

Audience participation is firmly on the agenda. You may be asked to shake a maraca as you stand and sing along to O Lord Won’t You Buy Me a Mercedes Benz; you may be dragged on stage to dance. You may also be handed a miniature of Southern Comfort or a glitzy backstage pass. When commanded to stand and join the chant “Fuck the cops”, though, the audience of mainly 60-something diehard Janis Joplin fans showed a distinct lack of enthusiasm.

Summer of Love plays until 28 August at Union Theatre. Further information and booking via the below link.