Home » Reviews » Comedy » Review: The Importance of Being Earnest, online 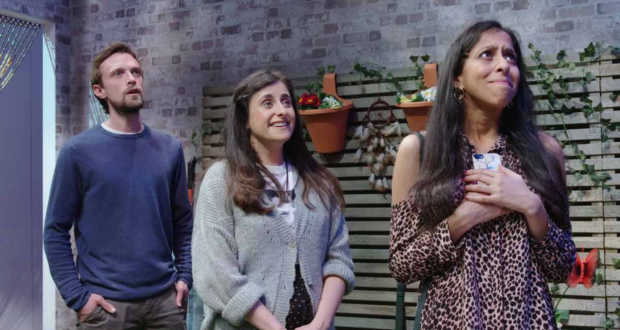 Lawrence Batley Theatre, Huddersfield, and The Dukes, Lancaster Oscar Wilde’s farcical play has had many adaptations, with many more to come I’m sure. My personal favourite is the 2002 film starring Rupert Everett and Colin Firth playing two friends using the pseudonym ‘Earnest’ – resulting in much confusion and hilarity.&nbsp; It feels inevitable that at least one lockdown theatre production would bring Wilde’s chaotic play to life, so I was intrigued to see how it would be adapted this time.&nbsp; This production, co-produced by the Lawrence Batley Theatre in Huddersfield and The Dukes in Lancaster, moves the play to&hellip;

A fun adaptation of this iconic play, with the usual mishaps and mistaken identities you’d expect, but told with a modern, northern, twist.

Oscar Wilde’s farcical play has had many adaptations, with many more to come I’m sure. My personal favourite is the 2002 film starring Rupert Everett and Colin Firth playing two friends using the pseudonym ‘Earnest’ – resulting in much confusion and hilarity.  It feels inevitable that at least one lockdown theatre production would bring Wilde’s chaotic play to life, so I was intrigued to see how it would be adapted this time.

This production, co-produced by the Lawrence Batley Theatre in Huddersfield and The Dukes in Lancaster, moves the play to the north of England and to modern times (thankfully though without any references to the pandemic). The essence of the play is kept alive, but with a modern twist and northern references scattered throughout. At times the northern jokes initially felt cliched, with flat caps and mills, but on reflection it fits cleverly into the farcical nature of the original play.

The cast are all especially strong, as you’d expect from their biographies. Tom Dixon and Gurjeet Singh are great as the two Earnests, playing their parts with the sincerity that such farce requires. Alongside these, the production plays host  to some more familiar faces, with comedians Hugh Dennis and Sindhu Vee briefly hosting a morning TV show from their own home. As a Drag Race fan, it was slightly disappointing that Divina de Campo appearance was all too brief; it did feel like more could have been done with her part given her talents showcased on Ru Paul’s Drag Race.

Filmed in a theatre, obviously without an audience, at first there is quite a surreal atmosphere to it, something akin to a sitcom parody or a 90s kids TV show. Thankfully this feeling is short lived, and very soon the theatre setting really captures the atmosphere of a play on stage. This atmosphere is further emphasised by the sound effects that accompanied most of the action. This seems to be a conscious style point but did take some getting used to. The quality of filming is so high, that the theatre aesthetics of the set and sound design jarred for the first ten minutes or so.

Arguably the most famous line of the entire play, in any production, is “a handbag?”, so it was intriguing to see how this would be handled. The show is littered with pop culture references, and the handbag line pops up in a Who Wants to be a Millionaire parody in which one of the Earnests is being grilled on his eligibility for marriage. But the funniest change to this line came towards the end of the play, when it is revealed that it was actually a holdall in Huddersfield.

It was hard to put my finger on what made this show feel so strange at first, but once I had adjusted to the quirky aesthetic, I found it funny, clever and thoroughly enjoyable.

The Importance of Being Earnest is available online until 4 May. Tickets are £12. Full details via the below link.