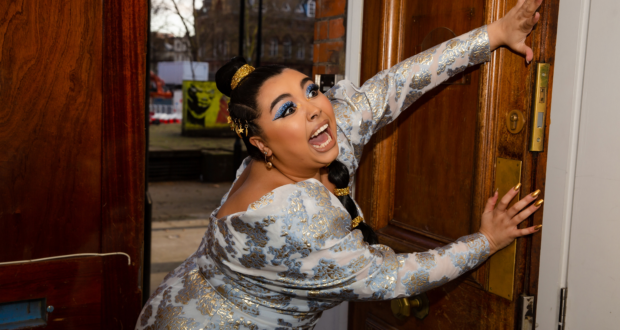 I’m sure I’m not alone in re-watching many Disney films during lockdown, especially with the introduction of Disney+ at the start of the pandemic last year (good timing, Disney). But what if the princesses aren’t happy with how they have been portrayed? What if they’re angry with the way they are endlessly commercialised? That’s where Disenchanted comes in. We meet some of the most well-known princesses who are putting on a show of their own, to tell their real stories. Snow White (Jodie Steele) is the narrator and the feminist narrative is strong. Some of the lines promoted uproarious&hellip;

Disenchanted hilariously gives much-loved princesses the chance to set the record straight and tell the true story of their so called ‘happily ever after’.

I’m sure I’m not alone in re-watching many Disney films during lockdown, especially with the introduction of Disney+ at the start of the pandemic last year (good timing, Disney). But what if the princesses aren’t happy with how they have been portrayed? What if they’re angry with the way they are endlessly commercialised? That’s where Disenchanted comes in.

We meet some of the most well-known princesses who are putting on a show of their own, to tell their real stories. Snow White (Jodie Steele) is the narrator and the feminist narrative is strong. Some of the lines promoted uproarious laughter, despite my watching alone. The princesses are angry with Disney, they want to “pull an Emmeline Pankhurst on his arse”. And so, they present their own versions of their happily ever afters, which, we are soon corrected, can actually be a “royal pain in the arse”. In case you haven’t guessed by now, this isn’t one for the kids.

Although the individual princess stories are funny, especially the Little Mermaid (Millie O’Connell) drunkenly regretting giving up everything for a cute guy, the best moments of the show are the ensemble songs. A highlight is one about their ridiculous figures and large breasts as a result of “guys making films with their flies”. While the music is very stereotypically ‘a musical’, and not particularly memorable, it perfectly suits the show and gives the lyrics a platform to shine.

The script is very amusing, with jokes aplenty, aided by the comic acting of the cast, which is spot on throughout. Allie Daniel as Sleeping Beauty is particularly hilarious, especially when, on falling asleep yet again, she is prodded by Cinderella (Sophie Isaacs) with a broom. Sleeping Beauty mistakenly thinks it’s Pinocchio and you can only imagine the scene that starts to unfold before Snow White hastily brings it back.

One of the more reflective moments of the show is when Pocahontas (Grace Mouat) tells her tale. Although it was my favourite Disney film growing up, I am aware of the true story of Pocahontas and how far removed it is from the Disneyfied version we are presented with. This section begins with some humour (“honestly does anyone believe my grandma’s in that tree”) and observations on why there are always leaves swirling around her. But it ends with a sensitive outline of her true story and the prompt to say her name and tell her tale. This is incredibly powerful, and startingly different from the rest of the show.

Instead of streaming to us from a theatre stage, the show is filmed in front of a green screen with bold colourful backgrounds. At first this was quite intense. Seeing West End stars so close up is not something commonplace, and although initially the facial expressions felt overdone this actually suited the pantoesque, farcical feel of the show. It didn’t take long to get used to the way the show was presented, and the production values were incredibly high, with only a couple of moments where the green screen edges were noticeable.

Disenchanted is brilliant fun, but if you’re not a Disney fan a lot of the jokes may be lost on you. There is a nod to the original fairytales by the Brothers Grimm, but it’s very much a critique of the way that Disney presents the stories. Despite being an unashamed Disney fan, I loved the show, and although I take their point, I’ll definitely still be curling up on the sofa with my old favourites.

Disenchanted is available from stream.theatre until 11 April. Further details and booking information on the below link.