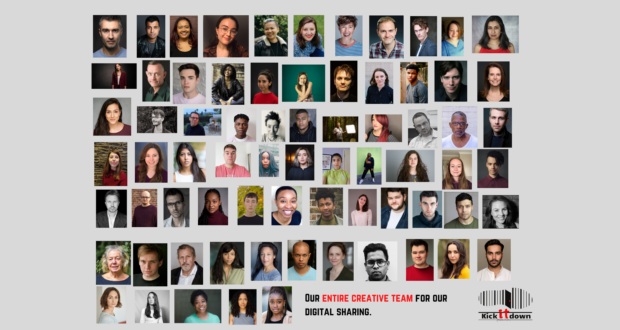 You might question why my earlier review of KickItDown Productions’ collection of videos began with Digital Sharing 2, not Digital Sharing 1. I justify this with my aversion to cats, and the description of one of the shows in this collection being about a murderous feline. However, I now bravely faced that first part, and it really paid off. It was a treat to watch another of these collections, which result from a call out for new writing in March 2020 as part of the Lockdown Liftups scheme. Digital Sharing 1 includes Let’s Meet Up, Past the Pier and&hellip;

Three shows that create heartfelt and emotional connections with the audience, despite lasting no more than eight minutes each.

You might question why my earlier review of KickItDown Productions’ collection of videos began with Digital Sharing 2, not Digital Sharing 1. I justify this with my aversion to cats, and the description of one of the shows in this collection being about a murderous feline. However, I now bravely faced that first part, and it really paid off. It was a treat to watch another of these collections, which result from a call out for new writing in March 2020 as part of the Lockdown Liftups scheme.

Digital Sharing 1 includes Let’s Meet Up, Past the Pier and Mousing. These shows only last twenty minutes in total, but each manages to conjure up an entire world of heartbreak, tragedy and surprising humour.

Let’s Meet Up by Ed Birch begins with Fiona Bruce telling us all that we must stay home, at the start of the first lockdown, which feels like it’s either ten years ago or yesterday. The show centres around the friendship of two teenage boys, one who is approaching the pandemic with the seriousness it deserves, whilst the other is very keen to break the rules. At first it seems quite trivial, just two teenagers trying to readjust their friendship to suit this new world. However, as the show develops, over just eight minutes, we are faced with the reality of the awkwardness between them: it’s not just the rule breaking that’s causing tension. At first the show feels a little dry and stilted, as many of those early Zoom calls probably did, so it isn’t clear if this is intentional. But as the drama increases, it is hard not to become invested in the unfolding plot. The use of calls being cut off and background music is incredibly effective in creating a sense of theatre, despite the Zoom format, and the ending left me wanting more.

The other two shows in this collection are audio only, which is a format I enjoy, as a fan of audio books and podcasts. Past the Pier is a heart-breaking account of a man who has suffered immense loss. It is incredible what a well-rounded story writer Sam Milnes achieves in such a short space of time. This is not an easy listen, and despite the brevity of the piece, I was moved to tears. The sincerity with which Danyal Ismail tells the tale grips you from the start, and the sound effects throughout are evocative. Again, I was left wanting to hear more!

Mousing by Tom Misuraca is surprisingly hilarious given it is a monologue about a man that writes a letter for the person who will find him dead. Performed earnestly by Tim Cartwright, the note details the way in which his cat has inevitably killed him. As a person with a deep mistrust of cats, this was quite unnerving for me, and not entirely unbelievable. The piece is also very funny, warning those who want to seek revenge to not even try, because Fifi will “see it coming for miles”. Was this the result of spending too much time at home with your cat due to lockdown, or a cat owner finally realising the true menace of the creature they chose to welcome into their home?

In my review of Digital Sharing 2 I suggested you would expect the writing in these shows to be of a high quality, given the fact that only 18 were selected from 700 submissions. I was delighted that Digital Sharing 1 also met these high expectations. Despite their short length, all three pieces are gripping, satisfying and heartfelt. Another very enjoyable way to spend 20 minutes!

Past the Pier
Written by: Sam Milnes
Directed by: Nathan Charles