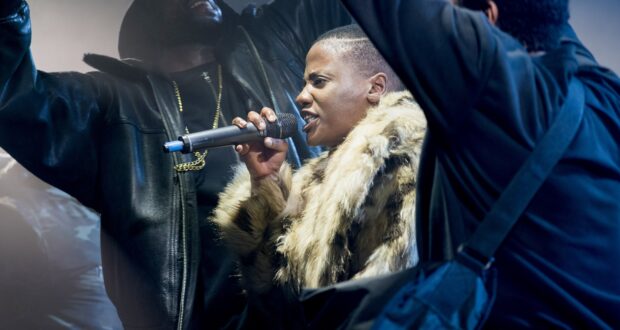 It’s thirty minutes since the scheduled start time, and the MC on stage again tells us to get ready for Lil Miss Lady (Lady Lykez), she is in the house. Whilst we wait, our MC continues to spit out his rhymes and we’re treated to the sight of other audience members getting into the gig spirit in the comfort of their own homes. But there are only so many times you can tell us Lil Miss Lady will be with us soon before it feels repetitive. To be honest, 45 minutes into proceedings without an actual start and I’m&hellip;

A good contribution to the ever-developing genre of gig theatre, but it just feels let down by some poor decisions around the overall presentation.

It’s thirty minutes since the scheduled start time, and the MC on stage again tells us to get ready for Lil Miss Lady (Lady Lykez), she is in the house. Whilst we wait, our MC continues to spit out his rhymes and we’re treated to the sight of other audience members getting into the gig spirit in the comfort of their own homes. But there are only so many times you can tell us Lil Miss Lady will be with us soon before it feels repetitive. To be honest, 45 minutes into proceedings without an actual start and I’m close to bailing out. As much as I love (and severely miss) live music, watching onscreen just doesn’t work for me. Such a long drawn out build-up doesn’t seem to do the show any real favours.

When we do finally get to the show proper, it’s actually pre-recorded, which on the one hand does mean recorded with a live audience in attendance (so recorded pre-social distancing days), thus adding laughter, cheering, whooping and even the occasional shout of encouragement to the soundtrack. But on the other hand, I’m left wondering even more what the previous 45 minutes has been all about! It’s a real shame that by this point my attention is already wavering, not ideal when a review is based on how you feel about the whole offering. Just to really add to the whole head shaking going on, midway through the show it breaks for an interval and we’re thrown back to the live feed and more MC’ing. The momentum is severely lost.

Ok, it’s clear this is all part of the production’s attempt to make this feel like an all-round live experience, to get the audience pumped up, to draw us in, but for me, it failed badly, leaving me wanting to terminate the viewing early. Live in a venue, yes, I’m up for the full works, for making this a full evening, but watching online, it really over-stays its welcome.

The real shame of it all is that the show itself turns out to be a fantastic piece of gig theatre, perfectly blending story and music in a way that justifies it being called theatre and not a music event. The story is a simple one; young black girl from an inner city estate fighting for her place in what is still very much the male dominated world of grime music, facing all the usual prejudices that both her sex and the musical genre come up against. From the start when she joins a crew as the only female, being left out of the loop by guys who see her more as eye candy than a performer at least their equal, through to the difficulties of becoming a single mother still trying to make it in the music scene, it’s the classic “poor girl makes good” story that does seem to be the standard of much gig theatre, unsurprising given where the genre is coming from to begin with. But don’t take being called simple as suggesting it’s not good, because it is wonderfully told through spoken word and incessant beats. The story arc is clearly laid out, built on by moments of spoken word and well crafted songs, performed in a way that isn’t going to strain the hearing to understand the context.

As a piece of gig theatre, Dominic Garfield’s Lil.Miss.Lady is superb. Had I been watching this live in a theatre space somewhere, I’m sure I would have been enthralled by it all, up dancing in my usual self-conscious way. But as an online production, it stretches itself out in a way that might be great for the hardcore grime fans, but for everyone else, it threatens to alienate the wider audience that it so richly deserves.

This show was shown for one evening only, although it is hoped that it will be performed live at later dates.

Previous: Interview: Natalie Beran tells us about getting Now.Here.This to the London stage
Next: Review: A (Socially Distanced) Evening with Patsy May, Phoenix Artists Bar