Home » Features and Interviews » Interview: Ian McFarlane invites us in to the secret world of the Revellers Society 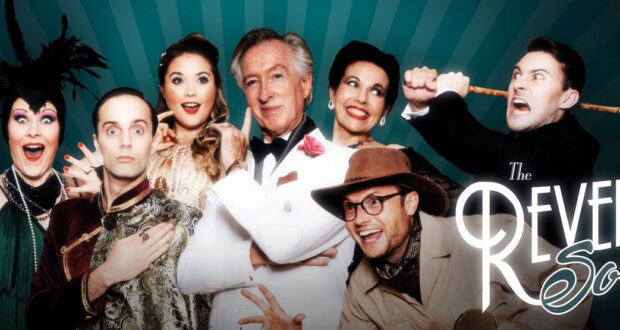 Author: Everything Theatre in Features and Interviews 15 October 2020 0 507 Views

There is nothing better than sharing a laugh with a room full of people. It feeds the human spirit.

The Revellers Society, an immersive theatrical experience, is heading to the OSO Arts Centre in Barnes from 5-8 November. It’s a show that promises as much alcohol to rub on your hands as there is to quench your thirst, an offer that in these strange days seems too good to refuse. So we decided to find out more from show creator Ian McFarlane.

Right, let’s get the obvious question out of the way first, what is The Revellers Society?

The Revellers Society is an exclusive members club for actors and eccentrics. For the first time in nearly a hundred years they are opening their doors to the public and inviting people to peek inside! Once there you’ll meet various Society members, across three rooms, who present different acts. There is a radio play (three people dashing around trying to play twenty different characters, all at the whim of a megalomaniac star), an explorer who has been cursed by an ancient artefact and is now connected to the spirit world (there are some wonderfully funny moments of psychic trickery in this room) and then there is the former Prince of the Kindgom of Slavaskia and the saucy songstress he abdicated for; they’ve been invited to perform at Buckingham Palace but need the audience’s help in censoring their song…

It looks like a very elaborate show, should we dress up in our Sunday best when we come along?

It’s by no means a requirement but as you are being welcomed into an immersive, albeit socially distanced, world then looking fabulous will no doubt enhance the experience!

The show’s been designed with the current social distancing restrictions in mind; can you tell us a little more what that means for anyone coming along to it?

We’ve really tried to look at the restrictions as creative opportunities. I’m aware how ‘la-di-da’ and ‘theatre directory’ that sounds but it’s the honest answer. The really important thing for me was to make everything feel like it’s buried in the world of the show. The audience are seated at cabaret tables, in bubbles of up to six people (fifteen per room) – so you say to yourself ‘OK then, whatever environment we create the show must feel decadent and exclusive’, hence why the rooms are at a lower capacity. So how do we make that part of the story? From this was born the idea that it’s a members club. Then you look at the promenade aspect of the show: obviously the audience must be distanced whilst swapping from room to room, so we worked out a pattern which makes that possible. From there you add our cast directing you in character and our ushers (also in character) sanitising the surfaces. There is no use in pretending the latter isn’t happening; you can’t cover it up and being aware of the area being cleaned also adds to our audience feeling confident. Then you say ‘OK, well perhaps the staff at the Revellers Society are of the slightly over-zealous variety’ – you get a metre away from your table and they’ve descended like locusts to scrub everything whilst trilling a bizarre working song or something. It all starts to add into the comedy experience. Also there is table service and who doesn’t love that!?

You’re putting the show on at OSO; was the venue selected to fit the show or have you worked the performance around what you can do with the venue’s layout?

This feels like a theatrical anecdote that has been fabricated for press release purposes but the truth is thus: I had just moved to the area and was exploring when I came across the theatre. I went inside to introduce myself and see if there was anything I could do to help. They were looking for someone to put together a show, and I said I could do it (or at least I have a hazy memory that six months earlier that was what I did for a living) so I looked at the space and came up with an idea and about six days later I was directing a photoshoot for the poster. I was putting costumes on people for characters that I hadn’t named at that stage. It was a slightly surreal day but filled with joy as everyone was just so happy to be making theatre again.

How difficult has it been to rehearse and put together a show in the current conditions?

Theatre is all about reacting and adapting. Adapting to a space or responding to a situation and making stories about it is what we do, so it’s been less hard to rehearse than you would imagine. Actors are brilliant people and they just embrace every new working challenge as it comes. It’s also very helpful that the cast are split into different rooms, so we can rehearse a lot of things separately.

The biggest challenge has been staffing. Social distancing means a smaller audience and we have to work within those financial constraints. I want as much money to go on the stage as possible and I want the actors to be well paid and taken care of – which means I’m doing seven or eight different jobs to keep our budget in check. It’s exhilarating for sure but I’m not sure I could live like this forever as I couldn’t survive with this amount of sleep long term! I’m very proud of the show aesthetic; it’s really beautiful. Our audiences are in for a treat!

You’re playing for four nights at OSO, where next for the show after this run?

In December we are heading to the South Mill Arts Centre in Bishop’s Stortford. I’m really delighted we are able to do that as I was supposed to have been producing and directing panto for them. It’s great we are able to bring something to their stage for the festive season. What’s going to be fun in December is that the show will not be presented in a promenade style but will be on a stage, in a more traditional format – the audience will still be at cabaret seating but we will be going back into rehearsal to reshape the show.

Finally, why should we be heading to the OSO to see you next month?

Because it’s going to be a joyous evening (or afternoon) out. You are going to belly laugh and you are going to leave with a smile plastered across your face. There is nothing better than sharing a laugh with a room full of people. It feeds the human spirit.

Our thanks to Ian for finding the time inbetween all his various tasks to talk to us.

The Revellers Society will be opening their doors to us at OSO Arts Centre for four nights between 5-8 November, with shows at 7.00pm and 8.30pm, plus matinee performances on the Saturday and Sunday at 2.00pm and 3.45pm. Tickets are from £20, available via the below link.