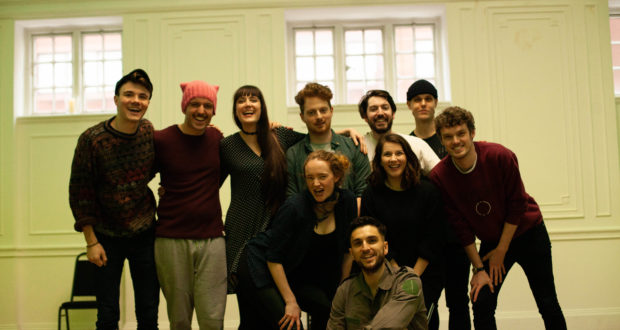 Author: Everything Theatre in Features and Interviews 28 February 2020 0 361 Views

Say It Again, Sorry? Are a theatre company that don’t think theatre should be experienced from the comfort of your seat. Instead they hope to inspire and encourage people not only to be in the audience, but to be involved with all aspects of the show. Inbetween rehearsals, Everything Theatre caught up with the team to discuss their upcoming show, and how they plan to get the audience to take part.

You’ve got two shows in the pipeline for 2020, want to tell us a little about them?

Firstly, we have our interactive theatre production, The Importance of Being… Earnest?  A twist on Wilde’s classic play where the entire audience and cast come together to create the best live theatre show possible, after the star actor playing Ernest fails to arrive on cue. The show is being streamed live across the nation so the show must go on. It’s reflective of the audience who participate – which means it is different every night. Audience members are cast in lead roles and encouraged to break every theatre ‘rule’ they’ve most likely ever been told or adhered to. The show has been likened to a delicious mixture of The Play That Goes Wrong, Austentatious and Shit-faced Shakespeare  .

Second, we have Easel Peasel, an interactive art show which offers everyone the opportunity to express their inner Picasso! It is a joyous production that’s been performed at festivals such as Glastonbury, Wilderness and The Big Draw Festival since its creation in 2018 and will be on tour again this summer. Everyone that takes part is invited back to a pop-up exhibition to see their artwork displayed. A public vote will pick one lucky winner to receive not only the Peasel’s Choice Award but also an arts bundle sponsored by CASS ART.

And how difficult is it to be working on two productions at the same time, especially as both are completely different in what they are offering the audience?

It is a challenge. Especially with cast often performing in both productions throughout the year. We are very lucky that we have a large core team – each company member has different roles to support each other and the smooth running of each project. Louise Goodfield is the Producer for Easel Peasel which allows the Artistic Director, Simon Paris to focus on The Importance of Being…Earnest?  The nature of the industry means that multiple shows and projects are a necessity, especially if a company wants to create new work and balance the books financially. You have to adapt and plan long-term strategies.

You run open rehearsals for your shows, do you feel this helps to make acting more accessible?

In our experience, yes. Not just acting, it also makes the creative process of theatre-making more accessible too. It allows a wonderful variation of experience in the room. With ‘closed rehearsals’ there is no way to learn what goes on in a rehearsal room unless you pay a fee or already know someone in the company. Closed rehearsals do have their uses, but it also means the show can only become the sum of who is present in the room. Allowing people to give feedback and participate allows more voices to have a say on aspects we may have missed because we are so involved in the project. At the same time, allowing others to be part of the process can build relationships, confidence and trust between audiences and theatre-makers.

Your shows have a lot of audience participation, is this risky if you don’t get a very reactive audience to play to? And would you still recommend your shows to people who just want to sit at the back with their head down to avoid being drawn in

Opening up a show in this way is always a risk but the skill is in how the actors cultivate an atmosphere where someone wants to be reactive, and how even being unreactive is also the right choice in the moment if needs be; the show can change someone’s mind about themselves as an audience and about interactive theatre in itself.

We would definitely recommend our show to anyone! There are varying levels of interaction, some interactive moments you won’t even have to leave your seat – others will include full make-up and costume, so there is something for everyone. Even watching one of your friends or family members on stage who is a little more confident is hilarious enough for us to recommend to those who are a little shy. Audience members will never be forced to do anything against their will but we’ve had many people coming to the show that have said ‘I don’t want to be picked or interacted with’ and then after the show are very enthusiastic about how much fun they had getting involved. It is hard for us to convince anyone before they have actually seen it, that it is for everyone. In this respect, we can only let our work and our audiences speak for us. They often tweet us afterwards! The show is clearly advertised as interactive, the game is not hidden so it won’t be a huge surprise (we hope!).

Easel Peasel is certainly a very different affair, it looks more like an art class, is that a fair assessment? 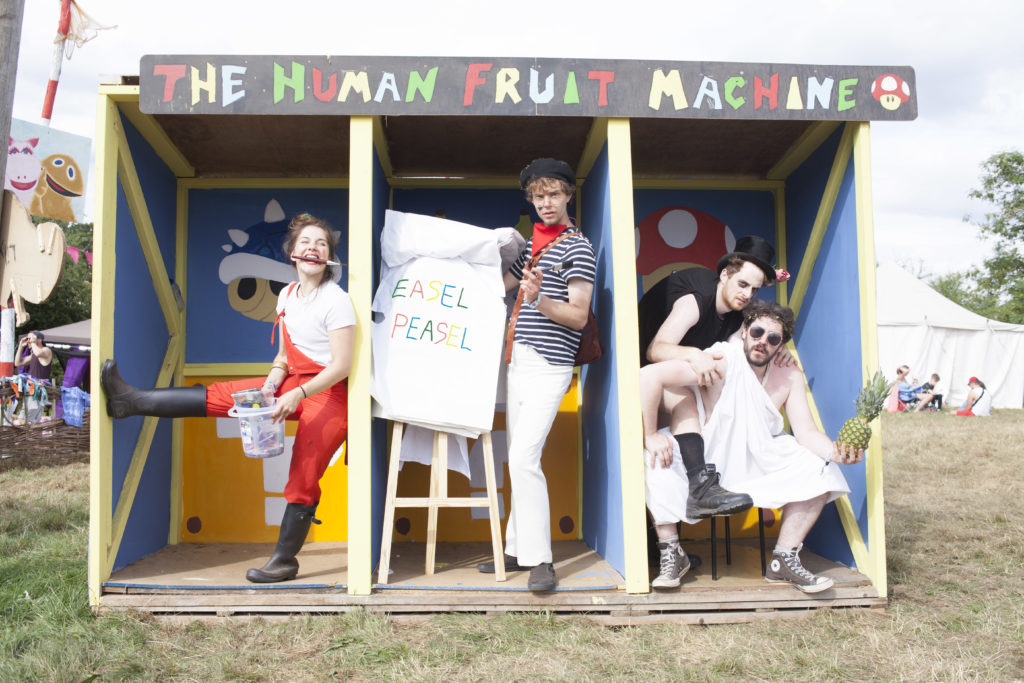 It’s more of an experience than a class, an opportunity for people to express themselves before they have the chance to judge what they are doing or decide whether their creations are good or not. People are often surprised with what great paintings they have managed to create in such a short amount of time. Then allowing other people to see and appreciate their art allows the audience to feel a sense of release and accomplishment that they have put something ‘out there’, just for the sake of creating.

With the audience being encouraged to paint their masterpieces on a portable easel, are you constantly surprised by the quality (or not) of what is produced?

Yes! We are so glad you asked that question. People can be incredibly imaginative with very few tools. We are lucky to witness the creativity of each individual that we come across. Sometimes you cannot tell the ages of any of the artists, we only give people five minutes to create something, and for most – this is exactly what they need to create something bold and fantastic!

What are the plans for the coming year with both the current shows? 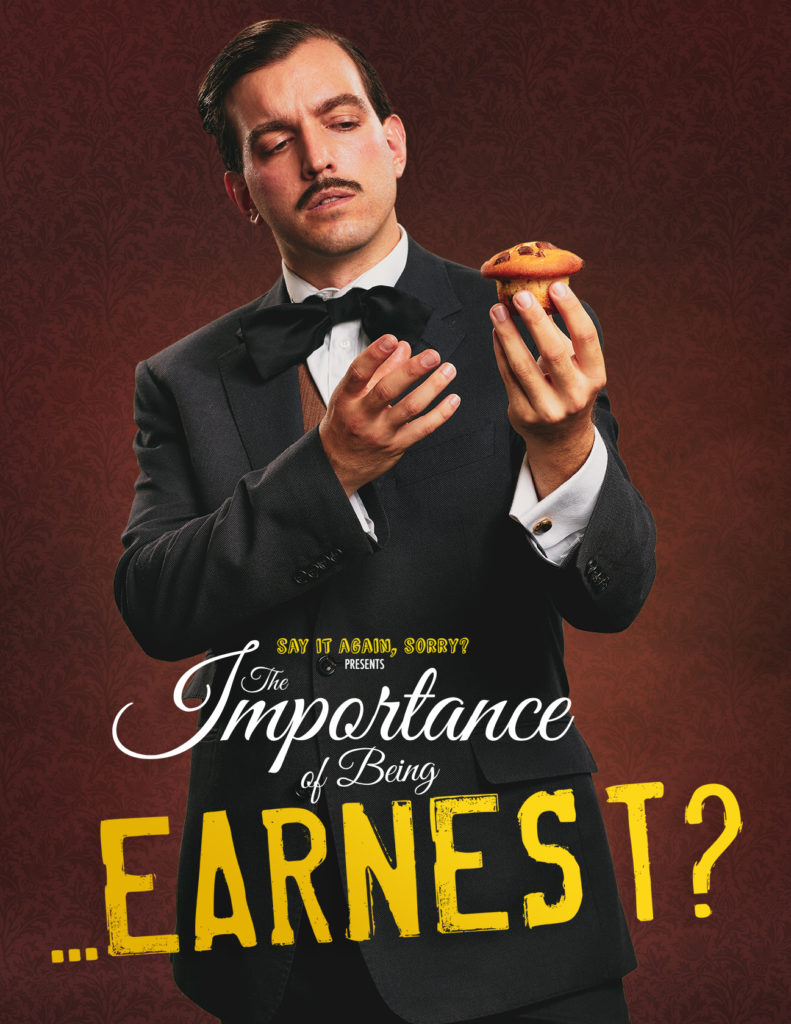 The Importance of Being… Earnest? will open at The Omnibus Theatre in Clapham 10th March -15th March. It then heads to Brighton Fringe at the Warren (The Hat) 6th-8th May and from there, to Edinburgh Festival Fringe for the entirety of August.

We are currently programming Easel Peasel for a UK festival tour and hope to take the show to Edinburgh Festival Fringe with CASS ART to the Royal Mile as a companion to The Importance of Being… Earnest?

And finally, do you have any other mad ideas lined up for your next production that you want to share with us?

Haha! Yes, we are very excited you called them mad – the madder the better! We are very keen to test the very boundaries of what we have already created and step further into the unknown. There are talks of creating a children’s show at the moment and a large-scale outdoor production.

The Importance of Being… Earnest? will be at Omnibus, Clapham from 10 to 15 March. Tickets available at https://www.omnibus-clapham.org/the-importance-of-being-earnest/

It will then run at Brighton Festival 6 – 8 May, tickets at https://www.otherplaceticketing.co.uk/5473/the-importance-of-being-earnest