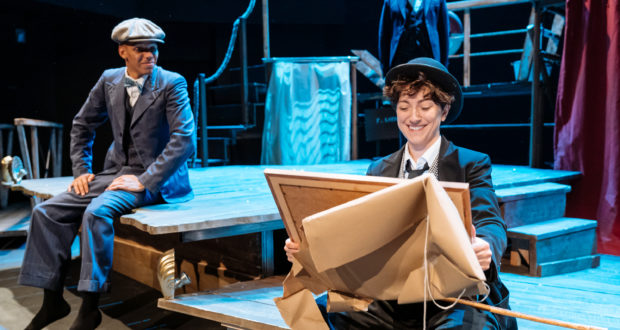 There is nothing remotely strange about the story of Charlie Chaplin and Stan Laurel. They were peers and, by all accounts, friends. Why add a layer of theatrical mischief, then, to the title of this tale of cinematic geniuses from physical comedy specialists Told By An Idiot? Well, I'm happy to report it's because there are moments of extraordinary stage magic within it.The way to enjoy the performance is to put any thoughts of biography and fact aside. The show is a triumph of silent comedy, design and music. The three come together to create a winning atmosphere of&hellip;

This wordless tribute to the stars of silent cinema proves an irresistible night of physical comedy.

There is nothing remotely strange about the story of Charlie Chaplin and Stan Laurel. They were peers and, by all accounts, friends. Why add a layer of theatrical mischief, then, to the title of this tale of cinematic geniuses from physical comedy specialists Told By An Idiot? Well, I’m happy to report it’s because there are moments of extraordinary stage magic within it.

The way to enjoy the performance is to put any thoughts of biography and fact aside. The show is a triumph of silent comedy, design and music. The three come together to create a winning atmosphere of goodwill, if not necessarily narrative.  Almost entirely wordless, it will no doubt appeal most to fans of clowning and those familiar with Told By An Idiot’s brand of ‘bigger than life’ playful spontaneity. It is not, however, difficult to imagine others being drawn in and converted by the end.

Amalia Vitale is a delightful Chaplin. The much-loved tramp is as fresh as ever here. It is the smaller moments that shine. I particularly enjoyed her quick swim with an audience member – yes it’s that kind of show – and early interaction with a misbehaving candelabra.  Her casual shrug as she drops Stan Laurel’s heavy corpse for the umpteenth time is one of the funniest moments of the night. Fear not, it is only a dream: Stan definitely lives. Oliver Hardy, mind you, does not. His death by heart attack is touchingly realised in a late scene. There are other moments that are not played for laughs. The doctor who comes to take young Chaplin’s alcoholic mother to the asylum, complete with straitjacket, does so with genuine menace.

Mother is played by with gusto by Sara Alexander, who is also the hardworking and talented onstage pianist. She underscores most of the action with skill. Percussion, flute and ukulele also make valuable appearances throughout. There’s the odd snatch of a song, and the show is at times as much a treat for the ears as it is for the eyes. Set, costumes and props are all clever and often provide the focus for the numerous gags. Designer Ioana Curelea has clearly had fun mining silent movie tropes for inspiration, seemingly only lacking the custard pies. There are multiple levels and platforms to the staging and one of the joys of the show is witnessing the cast leap between them, their exaggerated reactions ranging from mock fear to gay abandon.

Alongside Vitale and Alexander, Nick Haverson and Jerone Marsh-Reid take on multiple roles. Marsh-Reid foregoes the obvious Stan Laurel characterisations and, perhaps as a result, plays second fiddle to Chaplin despite the co-billing.  It is clearly Chaplin’s show though and, accordingly, it feels like the stage lights up whenever Vitale takes to it.

It doesn’t all work. A moment of street dance, perhaps courtesy of ZooNation’s Nuna Sandy, feels an unwelcome 21st century interruption. The notion that Chaplin was literally born fully formed with his hat and cane is neat, but a little too clumsily realised to be overly funny. The overall effect of the show, however, is enchanting. We are taken on a journey through Chaplin’s life with a sense of wonder and artistic freedom. Writer and director Paul Hunter’s programme notes explain that Told By An Idiot have “been fascinated by the deconstruction of an icon and the idea of creating a true fantasy.” I am not sure the performance deconstructs anything except the odd amusing prop, but it certainly creates a fantasy. Fortunately, it is a very easy one to enjoy.