It may have bitten off more than it can chew in its themes of pain, lust, longing, comedy, tragedy, horror and humanity, but Sex/ Crime certainly has moments worthy of attention

As “I’m So Excited” thumps overhead, we settle in upstairs at the Soho Theatre for an evening promising pain, lust, longing, comedy, tragedy, horror and humanity. And ff you think that’s biting off more than you can chew you’re pretty much spot on!

This is always going to be a divisive show considering its heavy sexual element, it’s disconnect from reality and its dialogue focused approach, mixed with a rather inconsistent pace. 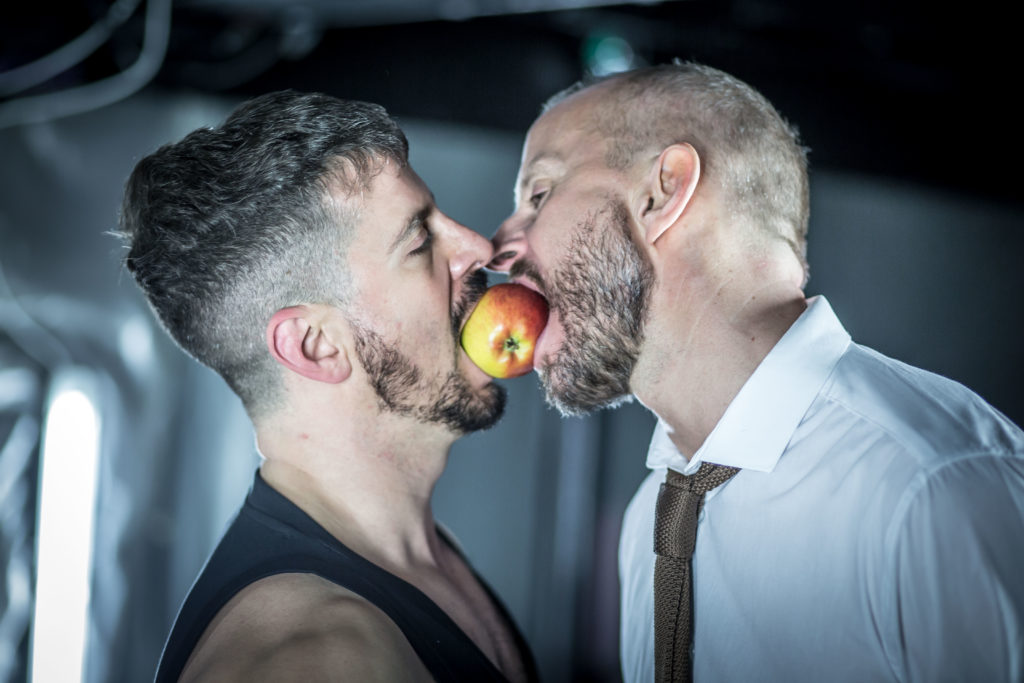 Following two men, simply named A (Johnny Woo) and B (Alexis Gregory, who is also the writer), it’s like a gay version of Waiting for Godot. That is if you substitute the waiting element with hardcore fetish scene. B’s desperation for death at the hands of A and the unfolding serial killer themed session exposes a cuttingly bleak and bitter outlook on the state of the world. Together with the set and Mike Robertson’s startling lights, this is Sex/Crime’s best attribute; the writing. Gregory has a talent for monologues. Coupled with Robert Chevara’s snappy directing, it allows the quick comedic changes, rambling riffing around the plot to shine. It’s a rapid-fire style that, although has very little aim, is interesting to behold.

Much like my new year’s resolutions, the play starts strong, dedicated and focused. The wordiness of the play is broken up by various masks, props and a nice use of blackout to unsettle the audience and heighten the cruelty inflicted on B by A. Regrettably, just like my resolutions, life then gets in the way, and the play falters under its own weight. The attempt is a valiant one though and has moments of real magic. But the first and then second twist blurs the focus of the play and ultimately risks confusion for the audience.

Jonny Woo masters (in every sense of the word) the role of A; precise, cruel, firm, yet able to show vulnerability. Terrifying, believable and rubbing warmth into the surreal and extreme dialogue, Woo is confident in the role. Gregory’s writing is visceral and sharp, but his performance seems hollow in comparison to Woo’s and is another example of the pitfalls of trying to take too much on.

Overall the play is a seething mess, a boiling mix of good and bad. Maybe that’s the point as it questioning not only the “rules” of a subculture but also the prevalence of self-hate and loneliness in modern life. Although the piece could have done with some tightening up (very fitting) the moments that work burn with an imaginative fire. Sex/Crime shocks, stumps and stimulates and I think I’ll need a couple of days to recover.