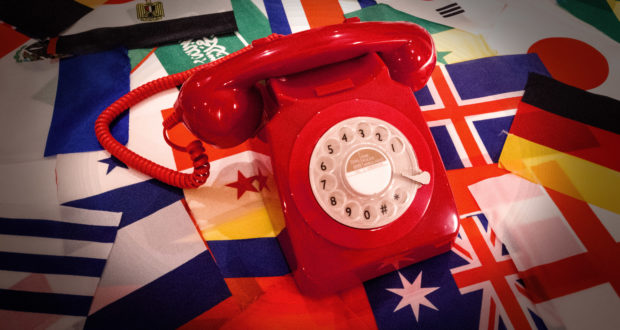 Author: Everything Theatre in Features and Interviews 21 January 2020 0 450 Views

With the VAULT Festival almost upon us, there is an abundance of fresh new shows to be seen. One such show is Head Of State, which will be having its world premiere beneath Waterloo Station. But before it does, Everything Theatre caught up with Rob Thorman, writer, director and founder of Grande Productions, to ask about the show, the importance of the festival and what some might call his obsession with Ariana Grande.

Your show’s called Head of State, what’s it all about then?

Head of State follows Mo – the newly-elected leader of the fictional country Nechora – as he accidentally becomes an over-the-phone therapist to the world’s most powerful leaders.

So did you have certain world leaders in mind when you were writing?

I was actually actively trying to ensure that the characters of the different foreign leaders weren’t going to be confused with contemporary ones. Rather than explore the idiosyncrasies of the politicians of the moment, I was trying to get under the skin of countries’ national psyches more generally and explore whether I could distil every country’s complex national problems into a single personality disorder. I’ll let the audience be the judge of how successfully I’ve managed that. On the otherhand, Mo’s character was very much inspired by some of the real-life politicians that I admire the most; Alexandria Ocasio-Cortez, Faiza Shaheen and Magid Magid.

The show is billed as satire, do you fear that satire is becoming more difficult given some of the real-life events going on all around us?

I think that’s a really important and interesting question which the industry at large hasn’t quite figured out the answer to yet. How can you parody the real world when it already feels so absurd? For me, the answer is that when reality descends into farce, satire must descend into fantasy. Aristophanes, one of the earliest satirists, had the most incredible and fantastical plots: characters travelling down to the underworld to find a decent playwright, characters running away to build a new perfect city in the clouds, women going on a sex strike to bring about peace.. . Aristophanes lived in a time when the direct democracy at Athens was packed with politicians who were capitalising on fervent nationalism and making populist decisions that felt absolutely bonkers to a lot of contemporary commentators… Sound familiar!? So to answer your question, no I don’t think satire is becoming more difficult at all, it just needs to be reinvented to reflect the unreal reality we’re living through. I fear the direction the world is heading in; I don’t fear the fate of satire!

Your production company is called Grande Productions and you confess to a love of Ariana Grande. Do you think she would enjoy the show if she came to see it?

Rob and cast at script read through

I mean, if she didn’t, I’m not sure I could cope. As Akshay, who plays Mo, said after our readthrough, there are some seriously deep cuts of Ariana’s catalogue in there – the show doesn’t just take her charting hits, you know? Also, a few months ago, Ariana came out in support of Bernie (Sanders) so I feel like she’d be a big fan of Mo and everything he’s trying to do… Right? RIGHT!?!

The show is seeing its first life at The VAULT Festival, how important do you think this festival is becoming for both London and new theatre makers? Do you feel it has helped open new avenues to shows such as yours?

For me, the great thing about the VAULT Festival is that it’s a genuine Fringe Festival. For a start, it’s much more affordable and possible to put on a show. Then there’s a sense that people will seek out new shows and explore what’s on there, especially as the programmers have made a real effort to commission a ton of shows that are all contemporary, relevant and engaged with what’s going on in the world today. I was able to ‘just’ fill in an application and be given a slot, even though I really don’t have much experience of theatre. It’s definitely a fantastic avenue and resource for Londoners looking to put on theatre and get their work out there, so I’m incredibly grateful for everything the people at the VAULT Festival do.

What can we expect next, for both yourself and Head of State?

Well, I’m expecting a phone call from Hollywood asking me when I can fly out and why I still haven’t managed to get representation back in London yet. No, back in the real world, I would just love it if we could get to take Head of State on to some more festivals for a longer run and keep growing its audience. As for me, I’ve got a bunch of other scripts, projects and ideas – some political, some less so – that I’d love to start bringing to life. But in the meantime, I’ll just keep working on writing them and making them as good as I possibly can… until I get that phone call!

Rob Thorman is a writer/director with a background in screenwriting. Rob has been shortlisted for the BAFTA Rocliffe new writing award three times and has participated in the NFTS script development diploma two years running. His short film The Ugly Duckling won Festival Favourite at Palm Springs Gay and Lesbian Festival and his musical-comedy When in Rome enjoyed a sell-out run at the Edinburgh Fringe.

Head Of State will be playing at Vault Festival on 4 – 6 February at 6pm. Tickets can be purchased at https://vaultfestival.com/whats-on/head-of-state/

The VAULT Festival runs between 28 January and 22 March, during which time there will be more than 400 shows to enjoy. More details can be found at https://vaultfestival.com/