You can use WP menu builder to build menus
Home » Features and Interviews » Interview: Actor Kaidyn Hinds on ‘The Jury’ 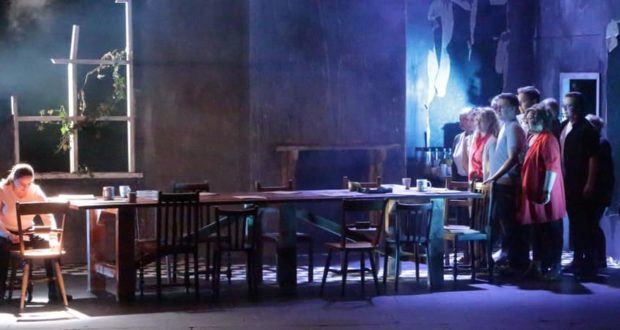 Author: Everything Theatre in Features and Interviews 29 January 2020 0 448 Views

Following a successful run at Brindley Theatre, Runcorn, new musical The Jury is heading to London, opening at Upstairs at the Gatehouse on 4 February. The show follows twelve strangers on a jury in a case that will change them forever.

During a short break in rehearsals, Everything Theatre caught up with actor Kaidyn Hinds to find out about the show, the importance of the trans community being better represented on stage, and whether his singing voice is ready for opening night.

What can we expect from The Jury?

Well, to some degree The Jury does what it says on the tin: it’s dark, it’s intense and very dramatic. It follows the twelve jurors and the case but really it’s about those beautiful human moments. These people who have been thrown together in a completely unexpected situation and come through it have impacted each other’s lives as well as their verdicts. There’s humour, there’s drama, there are gorgeous vocals!

You play Harry Turner, a trans man: what can you tell us about him?

Coming into jury service, Harry has his own past to deal with. The case challenges many of the jurors’ attitudes to gender, and as it plays into a lot of gender stereotypes this hits him pretty hard. It can be difficult to navigate your way through a bunch of strangers, particularly as a trans person; it actually takes quite a lot for Harry to stand up and have his say.

The show has a very dark feel to it: do you think staging it as a musical could affect the message the show aims to portray?

I think that it being a musical helps to empower the message because it’s so much more heightened! It’s an extremely conversational piece, with every note and phrase written as an extension of spoken word and speech patterns. In many ways The Jury doesn’t fit the musical theatre format; it’s more of a hybrid between a play and an opera. There are sections that are sung, some that are semi-sung and parts where actually the rhythm and emotion are more important than what notes we’re singing anyway. The music helps to intensify the entire story by giving the audience an insight into each of the character’s internal worlds. Musically it’s a really interesting piece, but I think that people who don’t like musicals will thoroughly enjoy The Jury!

How much input did you have into your character?

Our composer, Ashley Walsh, was specifically looking for trans actors for the part when I got in touch with him. Ashley was very open about his level of knowledge and that he wanted to write a completely authentic trans character. I was able to feedback on Harry’s song and storyline and to give some background as to why he would or wouldn’t say certain things. I know that there were various other trans individuals involved in working on the material as well, which is great as we all have different experiences of being trans and therefore each of us was able to spot something different!

I absolutely think that it’s vital to cast trans actors in trans roles. No matter where your character is at in their transition, there WILL be a trans actor suitable for the part. There are plenty of trans and non-binary actors out there, and casting them makes a huge difference. In this day and age there’s no longer any excuse for not making that extra bit of effort to find the right person; something as simple as a tweet or a Facebook post is all it takes! If it seems like the casting pool is too small, then expand it. We need to be doing more to nurture trans talent, and get trans creatives into training and onto projects.

Have you sung on stage before, or is this your debut in a musical? Is it a genre you plan to explore further in your career?

I’ve sung in many musicals, but this is my first professional job! I’ve been a musical theatre lover forever and fully intend to train in MT, though navigating my singing voice through hormone therapy has been interesting over the last few years. I’ll always remember playing Tobias in Sweeney Todd at the Minack Theatre, where I was a high tenor at the audition but by the time we got to the Minack I was wading into baritone range…

Could you see yourself working further on this show? And do you know if there are any future plans for it?

I can absolutely see myself being involved with The Jury in the future, and exploring both Harry and the show a bit further. I know that there have been talks of an off-West End transfer and potentially a tour in the pipeline. Whatever happens, I’m very excited to see what the future holds for the production!

Finally, what do you hope audiences may take away from seeing the show?

I would hope that audiences go away talking about it! If I had to choose three things, I would say: don’t take things at face value, listen to each other, and appreciate strangers. I would like our audiences to gain a different perspective on how they treat those around them, and what they really know about people. There may be a dramatic court case driving the plot, but really the beauty in this piece is about the relationship of the twelve jurors.

The Jury is on from 4th to 16th February, Upstairs At The Gatehouse. Tickets can be purchased online at https://www.upstairsatthegatehouse.com/the-jury