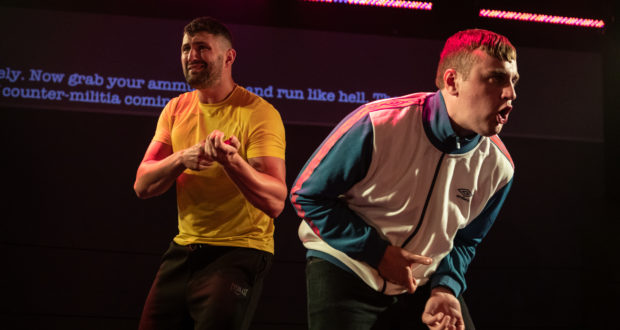 The opening scene of this one-hour play is designed to confuse the audience, beginning the arc that leads to discovering the one event that changed everything. In a sense, this kind of narrative is hard to shock audiences with. You start to feel that everything is building up to a single revelation, and once it is revealed there is not much else to do, unless the characters are radically changed by the event. In Jade City, this doesn't seem to be the case. The two characters – young, unemployed, working-class Belfast men Sas and Monty – begin at opposite&hellip;

An interesting and intimate portrayal of the struggle to survive, with strong characters and exciting design.

The opening scene of this one-hour play is designed to confuse the audience, beginning the arc that leads to discovering the one event that changed everything. In a sense, this kind of narrative is hard to shock audiences with. You start to feel that everything is building up to a single revelation, and once it is revealed there is not much else to do, unless the characters are radically changed by the event. In Jade City, this doesn’t seem to be the case.

The two characters – young, unemployed, working-class Belfast men Sas and Monty – begin at opposite ends of the stage, jumping from the limitations of their immediate reality (they can’t get the dole until Friday, so no cigarette papers, or beer until then) to big abstract dreams and memories. There is a night they remember, the night they met Katie and a posh student (some “c*** with a degree and all”!), but it is vague.

This opening scene is well-staged and intimate, bringing out an honest part of their inner lives that everyone, to some extent, can relate to. The manic shifts between dreams and limited reality, the confusion between memory and dream. It’s a powerful set-up.

The stage design works well with this opening. They stand either side of a boxing ring, with nothing inside it but two pub stools. A boxing ring is a place of performance, as well as a place of violence, of coordinated aggression. This cleverly plays into the performative anger that comes out regarding the single event – the big thing that happened on the night they met Katie, the thing that has ripped apart their close friendship.

They climb into the ring and stay there for most of the play. It is their living room, where they watch Judge Judy and weakly think about leaving, but never do. Instead, they play The Game. The Game takes them everywhere – they pretend to be in the Caribbean, on yachts, and working as “refuse collectors” (“that’s what they call bin men now”). The ring is also the pub, although in many scenes it’s unclear whether this is a dream, a memory, or their real lives. This confusion is exciting, turning their tiny world into so many other things, but it can also become muddled, and ultimately the dream/memory setting becomes repetitious as they work towards the revelation of the horrible thing that happened that night.

A definite moment of memory without dream is when the big event has split their friendship, they stop talking, and then they find each other in Jade City, a take-away shop in Belfast. Monty is in total denial of the big event with Katie, while Sas is traumatised by it. This could be a very moving scene, and it is well performed and staged, but Sas takes a moralising position that is too simplistic. They play polar opposites in their reaction, without much nuance. It would be interesting to see a more complex reaction from them both.

The ending is emotionally powerful and some of the perplexing cuts between dreams, memories and reality are tied up, although a satisfying amount of confusion is left, giving the audience space to keep thinking about what has happened. The masculinity portrayed has profound parts, particularly in the friendship between Sas and Monty, but it also plays into paradigms that are not sufficiently excavated and analysed. They both begin as boisterous boys, then the horrendous act of violence occurs and they split – one becoming big macho man, the other becoming reflexive. The narrative arc is a bit too pre-written. It feels like the characters have to follow the line drawn by the writer, rather than allowing them really to develop on their own, as people in such a traumatic situation.

Jade City is an interesting piece of theatre with clever design and great acting. There are funny moments and some moving scenes. But the narrative as a whole is quite rigid and the single event – which is, in itself, a potentially powerful and complex trope to build a play around – turns the characters into tired archetypes whose thin moralising undermines the strong beginning of the play.

E. C. Mason is a poet, playwright and Ph.D. candidate at Birkbeck, researching race in contemporary poetry. In addition to putting on many exhibitions, performances and readings with the group he founded, Penny Drops Collective, his poems, articles and essays have appeared in various media, including Exclamat!on, [smiths], Undercurrent Philosophy and We Will Be Free anthology. Among other awards, he has won the Bart Moore-Gilbert Essay Prize and the University of Bolton Poetry Award 2018.