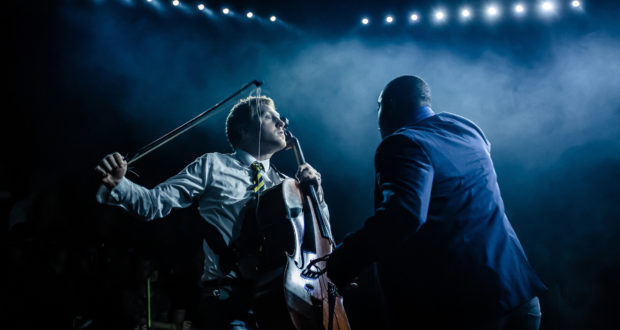 Photo ©The Other Richard

The Canary and the Crow, Summerhall (Roundabout) – Review

The Canary and the Crow, Summerhall (Roundabout) – Review

Once upon a time, a canary and a crow were sharing the same forest. They'd challenge each other with their song and the crow would always try to emulate the canary. But whilst everyone would admire the canary's beautiful melodies, the crow was being scorned for its rather unpleasant caw. These themes of integration and racial identity clash in Middle Child's third straight residency at Summerhall's Roundabout. Daniel Ward's high-octane semi-autobiographical confession follows his steps from the day, aged ten, he was admitted to one of the country's most prestigious grammar schools. Shifting in and out of character, the&hellip;

Weaving grime, hip-hop and storytelling, Daniel Ward tells the semi-autobiographical story of a black kid who faces whitewashing after being admitted to a prestigious grammar school. An open-hearted coming of age that smashes the boundaries between performing arts.

Once upon a time, a canary and a crow were sharing the same forest. They’d challenge each other with their song and the crow would always try to emulate the canary. But whilst everyone would admire the canary’s beautiful melodies, the crow was being scorned for its rather unpleasant caw. These themes of integration and racial identity clash in Middle Child’s third straight residency at Summerhall’s Roundabout.

On his first day at school, Daniel notices something odd with his presence there; he is now, effectively, a minority. Feeling out of place and compelled to fit in, he starts a new course of education, which offers as many didactic subjects as life lessons. Torn between his old friendships and the new people coming into his life, he undertakes a painful and prejudice filled journey to turn himself into an “acceptable black”. This cultural whitewash moulds him into someone who’s “not like the other” black teens. But still facing the reality of his underprivileged background, he soon realises that ambition without opportunity is the main cause of damage amongst his peers.

Weaving words, grime, hip-hop with the live cello and keys of Laurie Jamieson and Rachel Barnes, Ward brings onto the stage a ground-breaking piece of gig theatre. An open-hearted coming of age that smashes the boundaries between performing arts to regale the audience with an unprecedented experience. All under the beautifully lit, magically atmospheric, roof of the Roundabout.

Once upon a time there was a crow who’d been told over and over again that his song was ugly. After so many years trying to change it, he finally realised that this didn’t matter, because there was a lot more to it than just a pretty melody.