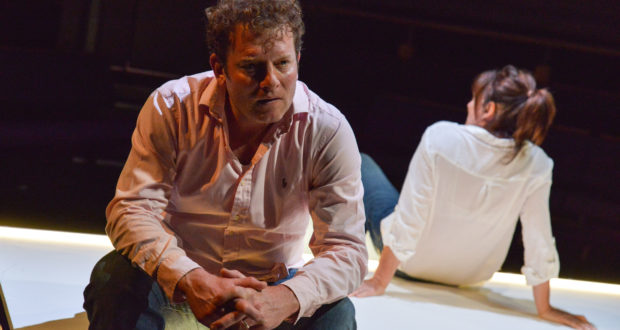 A strange but enjoyable comedy with plenty of laughter and darkness

Not everyone is who they seem on the Internet. Online, the lonely can find new friends, identities, and even lovers – both virtual and real. What happens then, when desperate desire meets with cold reality?

The play tells the story of an unnamed man and woman who meet online for very different reasons. He’s wealthy but bored and has taken to pornography and an affair to escape a loveless marriage. She’s struggling to get by, with debts to pay, children to feed, and with her husband in care, in need of company. The two meet for drinks, and soon a relationship (of sorts) forms.

If Eight Gigabytes does suffer, it is in presenting a somewhat superficial take on social issues. The class disparity between both characters is evident, and yet only really serves as a means of creating empathy with one character over the other. I would have been interested in an investigation of how privilege operates in a society where working class people (and in this case, working class women) are vulnerable. The play also veers quite close to stepping over the line at points, particularly with regard to the man’s interest in underage girls, which is never examined beyond a level of funny (if risqué) perversion.

Eight Gigabytes of Hardcore Pornography is a fun if discomfiting play that does not exactly bare all but will certainly provoke and entertain in equal measure.

Alex Hayward is a playwright, blogger, and public relations professional. Following an unsuccessful decade of novel-writing, he turned his attentions to drama and has never looked back. Outside of theatre, his interests largely revolve around music, records, and the French language - or trying to find the time to learn it.