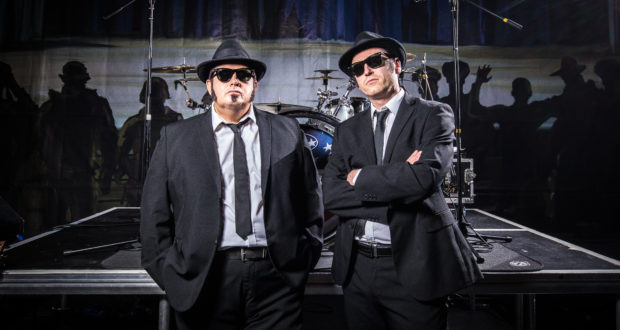 With Chiacago Blues Brothers currently touring the UK, quite possibly coming to a town near you soon, as well as one night only in London on 4 August, we asked Brian Penn to reminisce about a show that for many people of a certain age is a cult classic.

For a full list of upcoming venues and tickets see https://www.thebluesbrothers.co.uk/

One of the outstanding films of my childhood was the Blues Brothers, directed by John Landis. It had pretty much everything; a dazzling R ‘n’ B soundtrack; cameos from Ray Charles, Aretha Franklin and James Brown; and Dan Ackroyd starring alongside the mercurial John Belushi. The regulation shades and pork pie hats soon made their way into a certain teenager’s wardrobe; because they were soooo cool! This irresistible mix of great songs and hilarious set pieces could easily double as a great stage show. And sure enough, David Leland directed the stage version in a hugely successful West End run during the 90s. Since then it has returned in various guises wowing audiences with the same adrenaline fuelled performances.

The latest incarnation, Chicago Blues Brothers: Motown Mission is now touring and coming to London’s Savoy Theatre on 4 August. Whilst the film had some semblance of a plot; Jake and Elwood trying to save their orphanage from closure; it is essentially driven by the music. The film aimed to recreate a 1960s live revue, much like the Stax shows featuring Otis Redding, Sam and Dave and Booker T & the MGs. The stage therefore becomes the perfect home for an authentic live performance. With the set broadened to include the cream of Motown, it stirs up a heady brew of good time soul and gut wrenching blues. I first saw the Blues Brothers in the old Whitehall Theatre; not only did they take the roof off but also at least one of the supporting walls.  They were simply amazing and had everyone dancing in the aisles; I’ve no reason to think the Chicago Blues Brothers will be any different.  The best show in town will only be here for one night; wouldn’t it be a shame if you missed it?