You can use WP menu builder to build menus
Home » Features and Interviews » Interview: Wilf Scolding on ‘The Sweet Science of Bruising’ 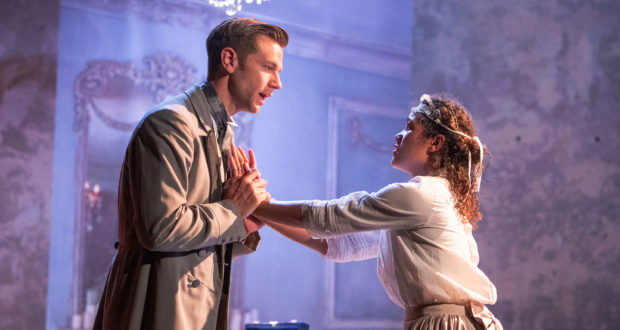 Interview: Wilf Scolding on ‘The Sweet Science of Bruising’

The Sweet Science of Bruising is returning to Wilton’s Music Hall following a sold-out run at Southwark Playhouse in 2018. Written by Verity Bargate winner Joy Wilkinson (who has also recently penned stories for Doctor Who), the play treads the fascinating territory of the world of female boxing in 1869 Victorian London. A lesser-known trait of London’s history is brought to life through the stories of four women and their quest to become the “Lady Boxing Champion of the World”. Expect proper stage-fights, corsets and the most perfect setting for the underground realm of the backstreet boxing ring. Wilton’s is rugged and gorgeous at the best of times: Where better to stage a thrilling period piece than world’s oldest music hall?

We caught up with actor Wilf Scolding (who previously played Rhaeger Targaryen on Game of Thrones) to give us an insider view on the rehearsal room and what to expect from a play with so much live action.

Tell us about yourself! What have you been up to before The Sweet Science of Bruising?

I’m in the Archers. I love doing that. Radio is such a lovely medium – I mean, you don’t have to learn your lines! It’s a real privilege to be doing it. It’s storytelling in one of its purest forms, as it utilises the listener’s imagination.

I also recently did The Madness of King George III with Mark Gatiss in Nottingham. I played his naughty son who keeps trying to dispose of him.

I have never heard that play described like that before. Please tell us about The Sweet Science of Bruising!

It’s a play about four female boxers, set in Victorian London. It covers their journey: how they discover their inner power as women, and as boxers, and how that shapes the course of their lives. The themes Sweet Science tackles are so relevant. It tackles equality in the workplace. It covers FGM, which is in the news a lot right now. Joy brings these things to the forefront without being too graphic. The audience know what is going on without it having to be spelled out. The play deals with everything so skilfully and it’s an honour to be acting out Joy’s work. It covers the lack of female representation in government at the time, in any kind of workplace, a lack of support for women.

The play is entertaining in itself, and it deals with current issues that need addressing in a really sophisticated way. We’ve had Joy in the room a lot – it’s been a real luxury. Often, you’re working with a script with a playwright who isn’t around anymore. We’ve been able to ask so many questions.

Who do you play?

I play Gabriel Lamb, who is the husband of one of our boxers [Anna, played by Emma McDonald]. Gabriel is an upper middle class Victorian gentleman. He is bright, works in the City and is successful. He is a confident alpha male, powerful and fully in control of his domain. On the surface, he is highly professional and respectable. Behind closed doors he has embarked on an affair outside of his marriage.

He is privileged, wealthy, erudite and gets everything he wants in life. He has a nasty streak. Underneath the respectability he is thoroughly unpleasant and there is a cruelty and a darkness. He is perhaps typical of many Victorian men in that he believes that men should be in charge of women.

What’s the history of women in boxing in the context of the 19th century?

It’s been so fascinating researching this with Kirsty Patrick Ward, our Director, and Jackie [Fisher, the Assistant Director]. There were female boxers around at this time. Some of them had to box in corsets, which must have presented all sorts of challenges! There weren’t rules in boxing at the time of the play. The late 19th Century was the first time that boxing rules were introduced: before that you could kick, you could punch . . . it was a form of MMA. There were women fighting in Mixed Martial Arts style before that was coined as a phrase. There are records of female fighters going back even back to the 17th century, I believe. It was generally a male-dominated world. Women were not as well paid and their matches not as well attended.

And there’s live boxing in the show!

Yes – the fight direction is just incredible. We have a fantastic Movement Director [Natasha Harrison] and a Fight Director [Kate Waters], who is known in “the business” as Combat Kate. She is just wonderful. Her fights look so real because they come from a place of instinct. The way she choreographs them, she gets into position and utterly reacts as you would that situation.

I don’t within the play, but I do box outside of it, which is a happy coincidence. The women who box in the play are amazing; they’ve been training for weeks for this. They’re pretty rigorous routines that Kate puts them through!

How many are in the cast?

There are ten of us – I didn’t do the original production, so it’s all new to me! We’ve totally rehearsed it, we’re in the fourth week and it’s going really well. It’s going to look beautiful. The music in it is absolutely spectacular.

Is the music a big feature? What is it like?

It’s almost like the music from the movie Sherlock Holmes with Robert Downey Jr. [a beautifully mad battle between violin, piano, and banjo by Hans Zimmer], but a more refined, spookier version. It’s really chilling. It gets under your skin.

Wilton’s is an amazing venue to host any show with an emphasis on music. It has such an atmosphere.

Doesn’t it! It feels like you’re going back in time before you’ve even stepped into the space. Anna Reid, our designer, has really taken the feel of the venue into account. It’s just going to be gorgeous. The costumes are so rich, too. I love the dress of that period.

Tell us your favourite thing about the play. Why should people see it?

It deals with such a range of issues, which are as relevant now as they were in the 19th Century, and in such a clever way. As well as seeing some great drama, it makes you come away and think about serious, relevant issues. That’s one of the most special things that theatre can do.

The Sweet Science of Bruising is currently playing at Wilton’s Music Hall through 29 June.