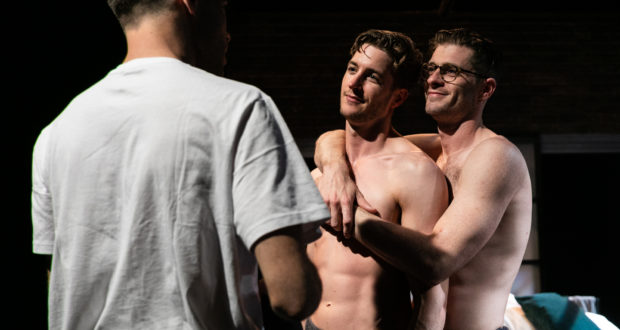 Theatre director Josh (Sean Hart) and academic Alex (Danny Mahoney) are happily married and expecting their first child via a surrogate. They’re relaxed about the borders of their sexual relationship, and when they invite the younger Darius (Jesse Fox) into their bedroom it’s just for the hell of it.

I was reminded of the US sitcom The New Normal, which features an unconventional but stable set of relationships, with likable characters negotiating uncharted territory together.

But what begins as fun gradually becomes less of a laughing matter, and S. Asher Gelman’s superbly accomplished play expertly and honestly charts an all too human downward trajectory as Josh and Alex’s relationship proves to be not as robust as they believe.

Afterglow also put me in mind of last year’s The Inheritance, in which a younger man impacts an established relationship. Gelman’s play doesn’t have the same dramatic scope, but when the quality and the empathy are this good, a focus on a “small” story can be perfect. The heart-breaking truth that Afterglow explores is that good people can cause bad things to happen – none of these characters are really to blame for the damage they end up inflicting on each other.

As the most impulsive character (well, he does work in theatre) Hart excels as Josh, authentically exposing the possible downsides of wearing your heart on your sleeve. Alex is ostensibly the “sensible” one, and Mahoney creates a superbly nuanced portrait of a man clinging to the crumbling remains of what he once thought to be indestructible. Fox is wonderfully affecting as Darius, a naturally romantic guy who’s wary of coming between the married couple, but then can’t help himself from doing just that.

In contrast to its fleshy and joyous beginning, Afterglow closes with the characters fully clothed and miserable through nobody’s fault.

Afterglow is flawlessly directed by Tom O’Brien, with an intimate yet ambitious set by Libby Todd. There are a few sightline issues if you’re seated at the sides, and the scene changes are sometimes in danger of dampening the production’s momentum, but this is a show that’s bursting with talent. It’s the UK premiere of an American success, and is one to savour: immensely skilful and beautifully sad.