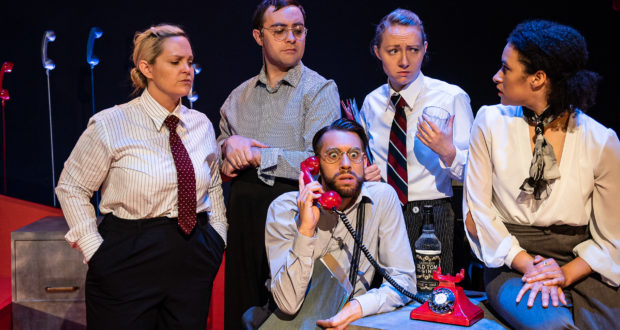 An eccentric, joyful celebration of musical theatre, Operation Mincemeat adds to the fine British tradition of clever people doing silly things in the name of entertainment. &nbsp;The fact its poster image seems to borrow Monty Python stylings is surely no coincidence. Make no mistake, members of Spitlip, the musical theatre collaborative that write and perform, are very, very clever people. &nbsp;The high-quality word play in the show’s songs is honestly worth the ticket price alone. Of course, Hamilton comparisons are ubiquitous in reviews of new musicals these days. &nbsp;However, I make no apology for doing it here. Spitlip share&hellip;

An eccentric, joyful celebration of musical theatre, Operation Mincemeat adds to the fine British tradition of clever people doing silly things in the name of entertainment.  The fact its poster image seems to borrow Monty Python stylings is surely no coincidence.

Make no mistake, members of Spitlip, the musical theatre collaborative that write and perform, are very, very clever people.  The high-quality word play in the show’s songs is honestly worth the ticket price alone. Of course, Hamilton comparisons are ubiquitous in reviews of new musicals these days.  However, I make no apology for doing it here. Spitlip share Lin-Manuel Miranda’s bravado style and technical abilities but, wonderfully, add a whole heap of gags and comic business on top. As a tiny but telling example, a delightful half rhyme explains that a ‘nut job’ attends a ‘Yacht Club.’  ‘Crossbow’ follows ‘Moscow’ early on too. If lyrics are your thing, there are countless examples to savour.

The songs are a mix of typical musical theatre fare and pin-sharp pop parodies, all effortlessly performed by an excellent stage side trio. Musical director Felix Hagan is described as a glam-punk composer in Operation Mincemeat’s marketing material but is obviously a complete all-rounder. With his band mates Ellen O’Reilly (Bass and Synth) and Lewis Jenkins (Drums), he successfully gives us everything from girl power pop through Parisian torch song and sea shanty to hip hop and, perhaps sharpest of all, dirty RnB from da club.  Any original cast recording, frankly, has cult hit written all over it.

As far as the story goes, we are in World War II. At least, the beloved, stoic, posh, imagined version of it we have all inherited from the movies.  We follow a Secret Service caper aimed at fooling the Hun with fake invasion plans. It is all based on a remarkable true story that proves the adage “you can’t make it up” is doubly true about our war effort.

Cumming and Hodgson make a fab central partnership. Their duets irresistibly chart a dweeby scientist’s growing friendship with a dashing military man. Roberts totally styles out rapping military strategy briefings, getting her tongue round Siciliy and Sardinia, as the operation’s commanding officer.  Furey-King makes a refreshingly spikey love interest, but comes into her own in a knockout nightclub number that is part Shirley Bassey, part Sally Bowles.  Jak Malone has fun as a burly submarine captain and annoyingly perky US airman, but totally shines as kindly office matriarch, Hester. At one point, he foregoes the laughter to play it straight with a touching ballad about the impact of war on wives left at home. It is one of the few calm moments of the evening and, as a result, is genuinely affecting.

Otherwise, there is generally a lot going on.  Frankly, too much at times. I longed for a less frenetic gang show feel to some of the action.  There is no director credited which may explain the rough and ready anarchy that you might, if you were being unkind, describe as a lack of polish.   Helen Coyston’s set design doesn’t help as it feels a little too cluttered for the New Diorama’s relatively small stage.  It includes dozens of distracting telephone handsets hanging from the ceiling. Presumably they signify something, but this reviewer remained stumped. The sense of distraction returned as the final couple of scenes introduce a show-within-a-show element. It’s an old musical theatre trope, of course, but given that the mission’s success makes for quite a neat ending it feels a self-indulgent and unnecessary twist.  A knowing joke about diverse casting as the finale approached got laughs from the actors in the room but felt a slightly bum note.

By the time Hodgson dons a sequinned jacket, though, and the rest of the cast form their final chorus line beside her, there’s so much love in the room any gripes quickly evaporate. Operation Mincemeat feels a triumph because it is one.  At a time when the West End seems dominated by perky feel-good US imports, Spitlip’s spunky tale of British derring-do is a welcome reminder how much fabulous talent we have close to home. Did I mention it is hilarious too?