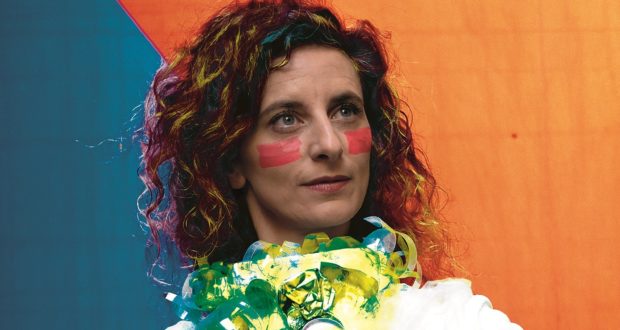 The history of Kill Climate Deniers would make quite a hefty Wikipedia entry. Playwright David Finnigan’s satire was cancelled in Australia prior to its first intended theatre run in 2014, but the show has since found other ways of existing, including a concept album and even a self-guided walking tour of Australian Parliament. The play’s inflammatory title became fodder for right-wing ranting in the media, the most high-profile being from Alex Jones of Infowars, a far-right media platform in the US. Jones used Finnegan’s fiery play title as proof of left-wing politics’ intention to incite violence, claiming, ‘That’s what they [the left] want to do. They want to kill you.’  After years of being on hold, the show ran at the Griffin Theatre, Australia, after winning the theatre’s 2018 Playwriting Award. Now, comedian Felicity Ward will make her stage debut in the UK Premiere at the Pleasance Theatre, directed by the venue’s Head of Theatre, Nic Connaughton.

Everything Theatre met with Finnegan to chat about the barmy premise of the play and why it’s proved to be near-fatally provocative, along with what the play is behind all of its media melodrama: there to entertain.

Give us Kill Climate Deniers in a nutshell . . .

This is an action thriller. A group of eco-terrorists take over the [Australian] Houses of Parliament during a Fleetwood Mac concert. They hold the entire government hostage, demanding an instant end to climate change . . . or everyone dies.

It’s a big, spectacular, bombastic show. It has a soundtrack of early 90’s house and techno.

Blimey. It is a comedy?

It is an extremely head-on play, with big knife fights in the corridor . . . but it’s maximalist. It’s a head rush. It has music, comedy and excitement, but underneath it is this conversation about climate change as it happens in the world. It deals with politicians and how ridiculous they are. There’s absolutely the comedy of having this world-ending catastrophe potentially on its way, yet the people we’ve delegated the task of dealing with it are politicians. That is kind of hilarious . . .

KCD is not the kind of show where people sit in silence as a tense monologue builds.

Has this play come from a place of activism? Or was the subject matter an artistic choice you made?

I am a playwright who works with climate scientists and I write about global warming. For the last ten years, I have picked my words very carefully because I haven’t wanted to start a fight. I haven’t wanted to speak about it in a way that will generate debate or anger, pushback, or friction. This tension built, and one day I just sat down and wrote this play. I was commissioned to write it by a small theatre company in Australia. I thought I’d finally let it all out and say the things that I’ve wanted to for a long time. It isn’t activism in that it will impart a particular message. It is more about a question: Can something be good art and good politics?

Has the backlash been mainly because of the title?

I don’t want anyone to go out and kill climate deniers! But, it is an incendiary thing to say. Maybe it is too much. Maybe it is not okay to threaten murder in the title of your play. I don’t know, and I don’t think anyone else knows. I think a lot of activists might reasonably say that it’s falling into the tropes of tribalism: that it’s not helping the cause. My feeling is that it has been thirty years, and people have tried many different ways to connect [about climate change]. What would it take to get immediate reaction and not just hypothetical promises? Would it take people with guns taking over the Houses of Parliament? I wouldn’t want that to happen. Right now, there’s the week of civil unrest. [This interview took place during the Climate Change protests led by Extinction Rebellion.] I haven’t spoken to the group, but I imagine they may not be on board with this sort of violent imagery.

This is such a current and important conversation: it’s amazing when theatre works to engage people concurrently to what’s going on in the real world.

I don’t go to the theatre thinking, ‘I need a political education!’ I go for music, dancing, explosions, excitement, stories, fun . . . and then to learn something. And that’s what Kill Climate Deniers is. I first started working on it in 2014, and I expected it would be done in six months and forgotten about. But, instead it was shut down and it took two years before we were able to get any of the action out there—a book, a walking tour, a concept album . . . and only then, the play.

Are you still adapting it?

I keep folding in the story of the ongoing project. It began as an action story with a provocative title. Then a group of right-wing shock-jocks in Australia and the US attacked the work and the production had to shut down. Even then, though, we had all this interest, so we put out the album and created a walking tour. The newest part of the play reflects on asking: Who are the climate deniers? Not focusing on the people who are the big media personalities, who sell outrage as a product, but who is invested in the idea? And why are they invested in it?

The evolution of this play is so interesting. It sounds like it is long in the making. Has it been strange to step away from this production, after being so involved previously?

I have felt like I have had my own stake in the show so far, and now it’s exciting to watch other people work with it.

To stage this play involves a lot of creative answers from a director. The solutions they find are often unexpected and surprising. I love throwing challenges at a director. It is a short play [80 minutes], and it must be all-guns-blazing.

I am super excited to see it. My practice as a playwright is either very hands-on, making or devising, or it’s letting people take something and letting them do what they want with it. What I write in a script is not what people will see. It’s like you’re writing a blueprint for people to make something.

This show is not doom and gloom. It is not even about eco-anxiety. It is a weird celebration—an odd celebration in the face of global crisis.

Kill Climate Deniers runs at the Pleasance Theatre from 4-28 June.