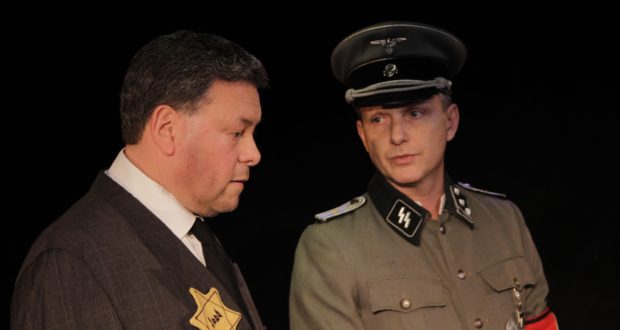 It's 1942 in a transit camp in Holland. Four Jewish detainees make up the camp's concert party: impresario Victor (Lloyd Morris), dancer Anna (Faye Maghan), her sister Millie (Eloise Jones) and Anna's lover Peter (Nick Devallé). When Millie discovers that their sick mother, Ette (Cate Morris), has been put on the notorious Tuesday List for transportation to a concentration camp the sisters form a plan of action: to ingratiate themselves with the camp's commandant, Conrad (Mike Duran), in order to secure Ette's removal from the list. Anna agrees to dance for Conrad, in return for her mother's deferment. But is&hellip;

An exploration of a Dutch internment camp that lacks wit, drive and subtlety.

It’s 1942 in a transit camp in Holland. Four Jewish detainees make up the camp’s concert party: impresario Victor (Lloyd Morris), dancer Anna (Faye Maghan), her sister Millie (Eloise Jones) and Anna’s lover Peter (Nick Devallé). When Millie discovers that their sick mother, Ette (Cate Morris), has been put on the notorious Tuesday List for transportation to a concentration camp the sisters form a plan of action: to ingratiate themselves with the camp’s commandant, Conrad (Mike Duran), in order to secure Ette’s removal from the list.

Anna agrees to dance for Conrad, in return for her mother’s deferment. But is this enough? Does Conrad expect more than just a simple dance? Well, of course he does. But the character of Conrad is played as an introspective, reasonable man, without a hint of the authority, malevolence or lasciviousness that would bring this part to life; he comes across as a put-upon underling, rather than the tyrant his position demands.

The curious L-shaped performance space of the White Bear, in which the audience is split in two at right angles to the action, presents an interesting logistical problem for the performers, but it’s one they deal with admirably. The bare stage, set in the corner of this room above a pub, features a table which a variety of props transform into a concert stage, a hospital ward, and the commandant’s office. But the placing and removal of these props is a clumsy business, which disrupts rather than punctuates the action.

The second half sees the concert performance we’ve been building up to, which opens with a silent-film style strobe-lit mime about a waiter and his complaining customer. After this the cast perform turns on the clarinet, ukulele and (on the press night) a horribly out of tune guitar as if they’re in a talent show. The situation – a cabaret in a Nazi-run camp – is the perfect setting for ironic, caustic songs that portray the characters’ vulnerability, despair and defiance through subtle satire. Instead, we’re presented with three insipid, meaningless love songs that convey absolutely nothing. What should have been the high point in the show instead turns into amateur hour in a holiday camp.

At well over two hours, the play features long, meandering scenes that could do with serious trimming. The pedestrian dialogue is almost entirely devoid of humour, with trite platitudes standing in for wit: to Ette’s complaint that Millie is taking sides, she replies “Families are circles, Mum, circles don’t have sides.”

There’s certainly an incisive play to be written about this transit camp, but this isn’t it.