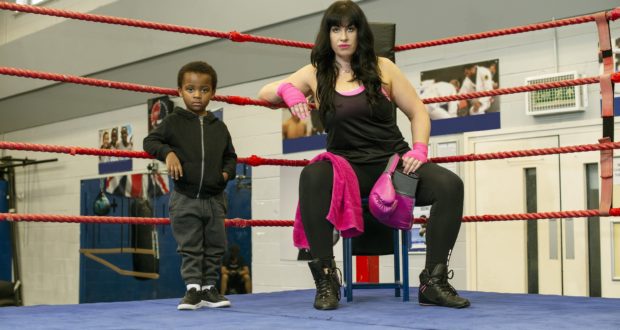 The worlds of theatre and sport will combine this spring, as writer/performer Libby Liburd heads into the ring with her new play FIGHTER. The play, which will run at Stratford Circus Arts Centre in April, tells the story of a single mum and her foray into the world of boxing. In this guest blog, Liburd shares how FIGHTER was inspired by her own personal journey with the male-dominated sport, as well as the pioneering female boxers who paved the way.

I know that sounds dramatic, but it really is true. Apart from finding within me the kind of mental and physical resilience that GI Jane would be proud of, I also learned what it meant when they say, ‘You don’t play boxing’. When I first started boxing, I’d done a few aerobics classes and a bit of BodyPump and I thought I was ready. I wasn’t. There’s something about the hardcore-ness of boxing training; you feel like you’re at death’s door, but you also feel invincible and unstoppable. It changes you from the inside out.

FIGHTER is inspired by my own experiences and those of the pioneering female boxers that quite literally fought for their right to fight, along with another hefty dollop of research. When I first started boxing, I was totally outnumbered as just one of just two or three women in the gym (depending on the day). Even now, you go in a boxing gym and you’ll see loads of men and maybe a handful of women at most (depending on the gym). I have to say that despite feeling outnumbered and facing the challenges of being in a male dominated space, boxing gave me so much. Boxing gyms were always the only gyms where, when my son was younger and I couldn’t get childcare, I could have him with me while I trained. You can feel like an outsider in a place, and at the same time, feel like you totally belong.

FIGHTER is about all those things: gritting your teeth, going in and taking up space to do the thing that you love. It’s also about the women that fought to do that before us. Today, Katie Taylor is a hugely well-respected talent, but when she first started boxing, she pretended to be a boy so that she was allowed to participate. Jane Couch had to go through a sex discrimination tribunal to become the first-ever professional female boxer licensed in Britain in 1998. Cathy Brown, the second professional licensed British female boxer, had to effectively pay to fight, covering her opponents’ flight costs because there were no other women for her to fight in the UK and sponsors weren’t interested in supporting her. This is only within the last twenty odd years or so – we’re not talking about ancient history! Women are boxing now because of the blood, sweat and tears of the female fighters that came before us.

Boxing is sweaty and visceral, so I always knew I wanted real boxers and real training onstage. I’m influenced by the emergence of new styles of theatre – things like gig theatre – and I thought if we can do that, then surely we can do sport theatre? I wanted to put actual boxers doing real-life training onstage, not just choreographed theatrical fight routines. So we’re having a cast of boxers from Fight for Peace onstage, replicating a real gym environment. Fight for Peace brought some of their young boxers from their boxing academy in Newham to see an early work-in-progress showing of FIGHTER, and we’ve developed the partnership from there. We both feel like we’re doing this exciting new thing, changing things up.

Like I say, boxing changed me. And that’s what FIGHTER is all about.

FIGHTER will play at Stratford Circus Arts Centre from 25-27 April.

Previous: Sh!t-Faced Showtime: Oliver with a Twist! – Review
Next: The Institute of Nuts, Matchstick Piehouse – Review