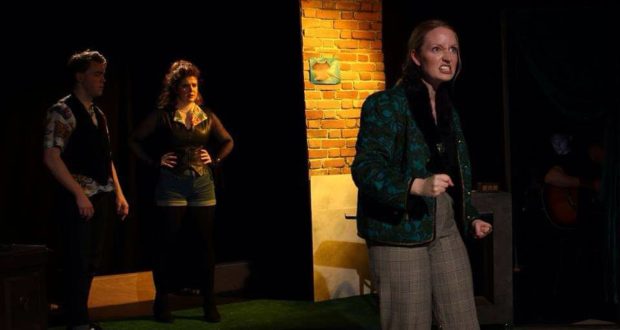 There is something exhilarating about seeing a work in progress, especially when it’s from a team surely only just out of their teens!&nbsp; There’s an energy created you just don’t get at normal press nights. Ok, so that’s because the place is full of friends and family along to support, but that means an excitable youthful atmosphere that is just so joyous to be part of.&nbsp; Secondly, the anticipation that you might be witnessing something special that may one day grace bigger stages than this. Briefly the story. Mott (Chris Vince) has writers block and needs to submit his&hellip;

For a work in progress, this show has so much promise. And in Rosie Dickson, they have a treasure worth seeing.

There is something exhilarating about seeing a work in progress, especially when it’s from a team surely only just out of their teens!  There’s an energy created you just don’t get at normal press nights. Ok, so that’s because the place is full of friends and family along to support, but that means an excitable youthful atmosphere that is just so joyous to be part of.  Secondly, the anticipation that you might be witnessing something special that may one day grace bigger stages than this.

Briefly the story. Mott (Chris Vince) has writers block and needs to submit his new play soon. Desperate for inspiration he writes what he sees in the relationship of his agent’s PA and Dan, her boyfriend (Emma Stepkowski and Hugh Train). Yes, it is that straightforward, it is a musical after all. And the whole while Boo (Rose Dickson, more of her later) is in his head, his imaginary friend there to pull all his half-cocked ideas apart. So, the first thing to say is that it is a whole heap of fun, helped greatly by that full house of youthful enthusiasm. Ok, so if this was on at a bigger venue than the over-heated confines of Drayton Arms Theatre, or if the tickets were more than the twelve pounds being asked for, or if you’re expecting a fully developed top of the range musical, you might be disappointed. But trust me, for a work in progress, this sure beats a lot of the shows on bigger stages that ask a lot more money to get your backside on a seat. Yes, there are issues, the clue is in the work in progress moniker. The basic concept isn’t exactly original, it’s been done a hundred times before and it’s this unoriginality that may eventually hold this show back.  The characters of Dan and Esther, vital for the show, are a little confusing; at the outset it looked like Dan is just an office lacky, working for Fletcher’s agent, but suddenly he becomes some great writer?  It seriously needs rethinking who or what Dan is. Then there is the ending; it’s rushed, it’s cumbersome, it’s an issue of balance. The back end of the show feels a lot weaker than the front end. Given it’s 90 minutes straight through, maybe an interval is needed, for cast as well as audience to refresh, voices did seem to flag a little towards the end.

Ok, so that’s the faults, but it’s a work in progress (did I mention that already?).  We shouldn’t be focusing on the faults, but praising the good, the parts that make this worthwhile, that will make or break this as it is developed further.

First up, Rosie Dickson. Guard her with your life, never let her leave any future reworking of the show. As good as the whole cast are, this lady blew the place away. Not just her voice, her whole persona. Dickson is dripping in attitude; her body language spoke almost as much as her voice.  This is a lady to watch out for in the future.  Her duets with Chris Vince were faultless on both sides, a real credit to the practice that has clearly gone into it.

Then there is the music. It is a musical after all, it needs good music, and Jack Miles sure has a knack of a catchy tune, I was humming all the way back to the tube afterwards.  Yes, like all musicals it’s a little generic, but it has enough about it to make it enjoyable and not bland.  And I am always a sucker for a great bass line.

And finally, along with Jack Miles writing and the directing from Hamish Clayton, there is a good flow to the show, the transitions work well, nothing feels too forced. The show has clearly been developed gradually and built up well.

The Problem With Fletcher Mott is quite simply a fun show, full of energy and good wit that has so much promise that I sincerely hope to get an opportunity to see it again when it re-emerges in its next incarnation. Just make sure whatever changes are made, you keep Rosie Dickson. Or I won’t be happy.